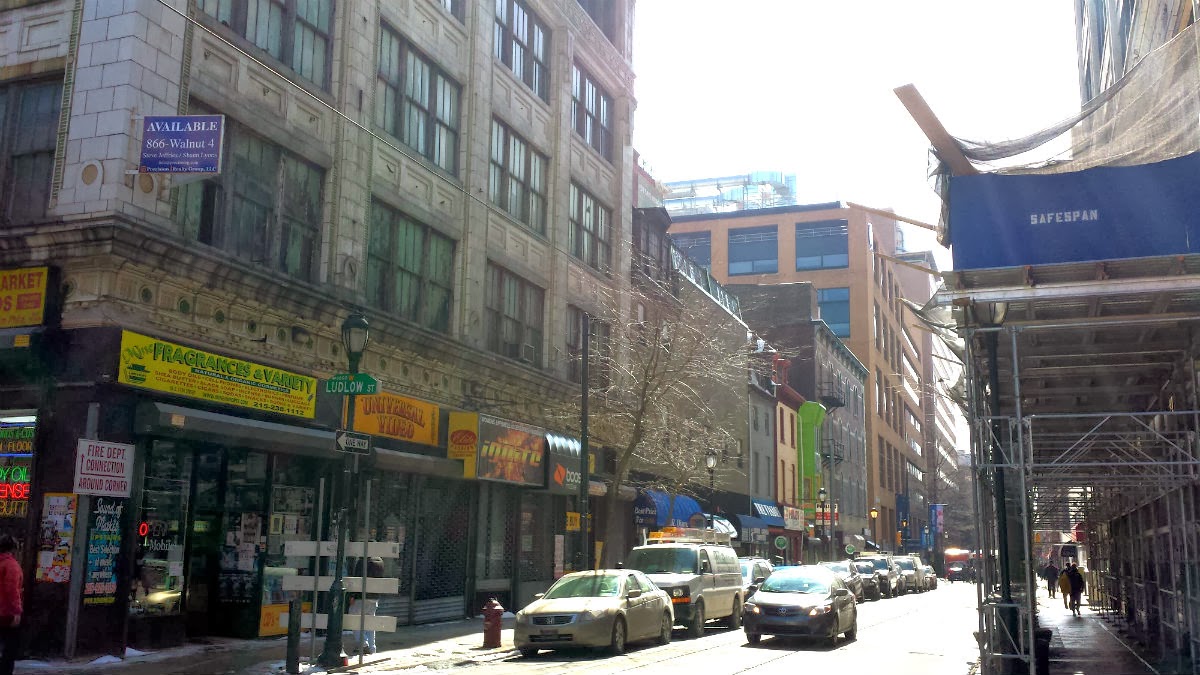 So much potential, so little love. This little block on 11th Street between Ludlow and Chestnut looks like horseshit and has no goddamn excuse. For at least the last 100 years, this block was a regular retail street that offered everything from stationary to jazz clubs to car batteries. Nowadays, it looks like shit. Empty storefronts, underutilized architecture, barely any nighttime activity. Even the sidewalk sucks. You take Jefferson's Gibbon Building out of the picture and you'd have a hard time convincing someone that this was Center City.
I'm going to ignore the also crappy block across the street, the one Inga recently called "near-slum conditions", because it is technically in a transitional period. The Girard Estate has some big plans for that spot once the Family Court Annex moves out so I don't want to shit all over it (until those plans are confirmed). But that east side of the block, it hurts.
Fuck it, let's go through the whole thing. The block begins with a great looking building that I've written about before designed by William Steele & Sons about a century ago. While it was once known for its beautiful single Horn and Hardart storefront embellished with stained glass that matched the rest of the building's facade, nowadays it holds no less than five storefronts, three of which are long shuttered (but available for lease).
The building's best current feature is probably the famous Sound of Market store, which fills the 2nd and 3rd floors, only accessible through another store called Mine Fragrances & Variety, that sells every fucking thing you've ever thought of. Need a gallon of shea butter? They've got it. Need a new bong? They've got it. Need a Ganesh statue? Got it. The only other active storefront on this building is a crappy jewelry store, just like all the other crappy jewelry stores you see in small storefronts all over the city. Who goes to these places? How do they make any money? This grossly underutilized building serves as a microcosm of the whole block: sad-looking, beat up, and in desperate need of new blood. It does have an "Available" sign on it, but it doesn't really specify for what. Apartments? Stores? Sex?
Sound of Market is actually a pretty cool store. No reason for that to have to move off the block. More on that later. 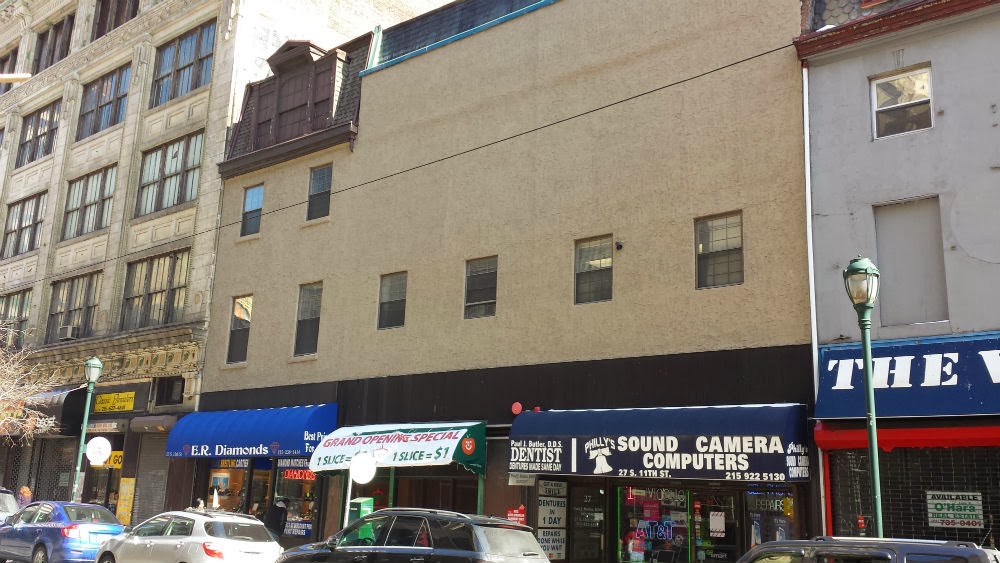 The next building on the block is a goddamn disgrace to any architect living, dead, or about to be born. 23-27 South 11th Street is the remains of three early 19th century extra-large rowhouses, so old that they were built before the Opera House that the Sound of Market building replaced. In the mid 1950s, a fire ripped through the three houses, at that point long having been converted to commercial use. The Girard Estate took control of the three properties on January 31, 1959 and combined them into one garbastic piece of ass-smash, throwing on a mid-20th-centuryesque facade that covered the two old houses on the right. At some point in time decades later, that facade was removed and this shitty building has looked like jizz ever since. It currently boasts a complete set of full storefronts and a dentist's office that's been rocking the upper floors for decades.
One front is filled with yet another hole-in-the-wall jewelry store that no one cares about, another is filled with one of those whacky-looking electronic stores you see all over the city. Again, who goes to these places and how do they stay open? The storefront in the middle is some of the only new blood on the block, occupied by Rosa's Fresh Pizza. This place is exactly what this block needs. A new take-out spot created by a young boul named Mason Wartman who ran with the idea of a $1-a-slice pizza joint in Center City and put it on this underused block, in a storefront that was previously empty for eons. The place was even featured by Michael Klein's Insider column. Good job. Now get a proper awning. 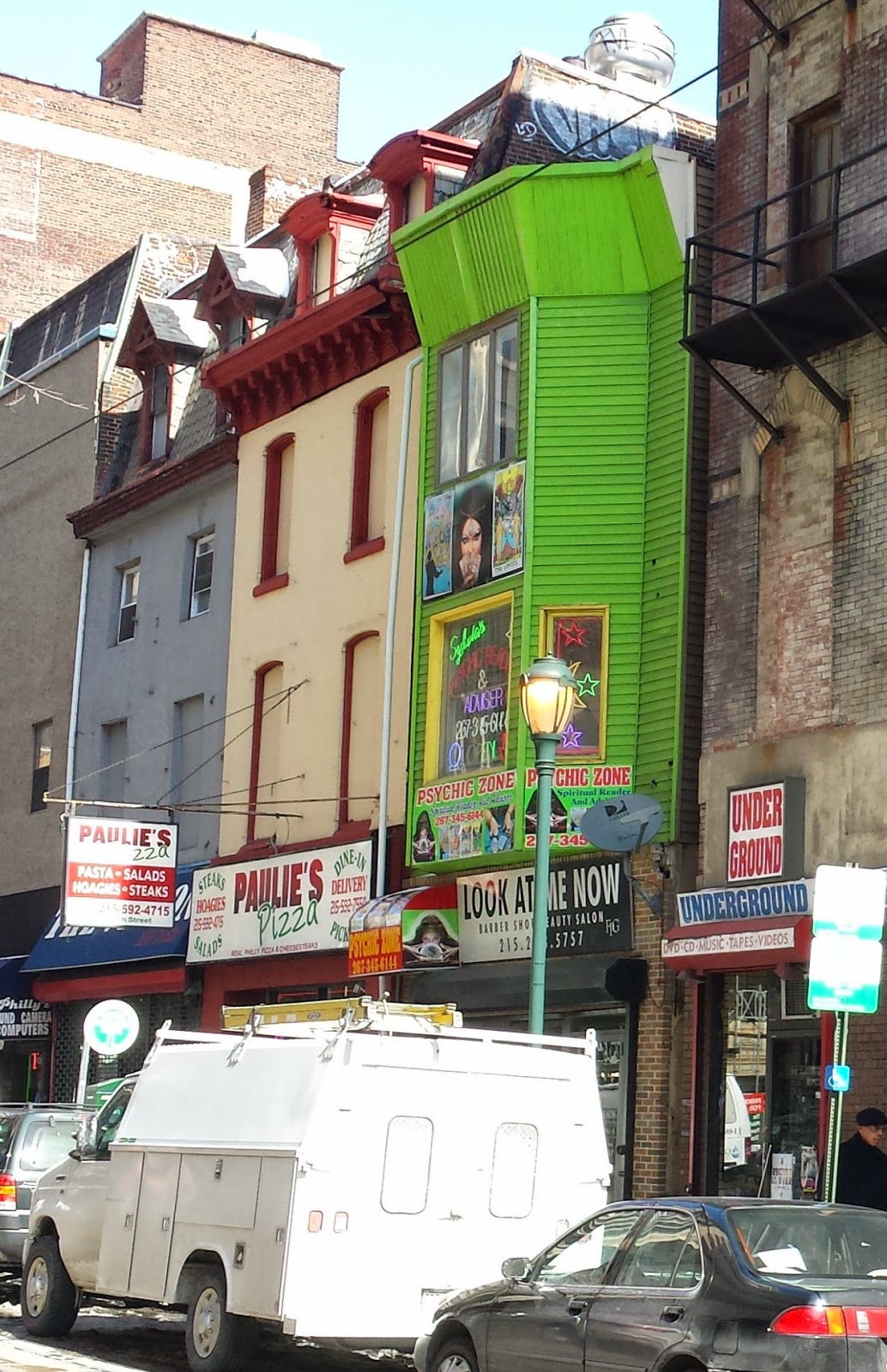 The next three properties are again old 19th Century Rowhouses-turned-commercial that have held scores of different kinds of establishments over the years. 29 South 11th, the grey one on the left in the photo above, has been rocking an empty storefront for several years now. The owner of the place, according to OPA, doesn't live that far away. You'd think he'd try a little harder to get the completely vacant building occupied. 21 South 11th is home to Paulie's Pizza and has been for quite awhile. Paulie's is valuable to the block for two reasons: 1) Its the only place on the block that is open late at night (closes 11:45) and 2) It has the most hilariously angry Yelp reviews (enjoy).
33 South 11th Street is the only one of these three old rowhouses that isn't violating the  Doors and Windows Ordinance, which seems to have gone un-enforced on this entire block. It holds an active hair salon on the first floor and a psychic's place on the second and third floor. The place was recently renovated with some new ultra-green siding and lots of perfectly legal, permitted signage that looks fucking crazy. Remember back in mid-2012, when people came after that convenience store over their ostentatious signage? Where the fuck were you when these folks put their (again, perfectly legal and permitted) signs up? 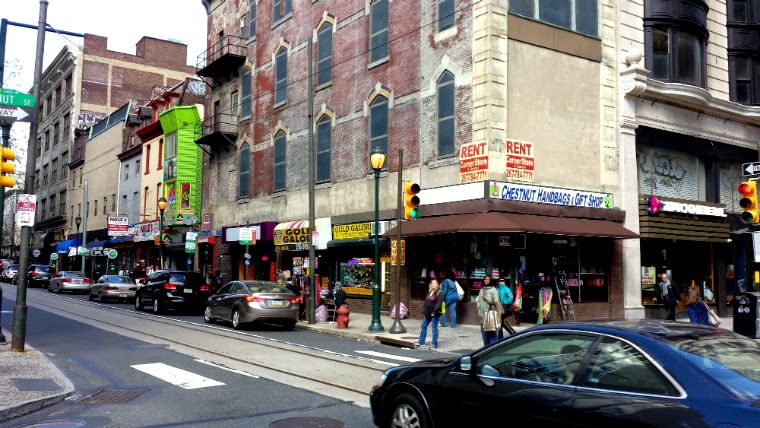 And now for the last. I've written about this sexy bitch-bastard of a building before as well, because it kicks ass and everyone should know about it. 1039 Chestnut, a 130+ year old Castle of Killer Cock-Slapping is looking sadder than it ever has, rocking four storefronts... but filled with what? Yet another mysteriously successful hole-in-the-wall jewelry store, a crap variety store, a dirtbag media store in the basement, and the block's newest edition, a nameless DVD/CD store, because people still buy those. The upper floors are completely vacant and boarded up. This building is a holdover from the infamous Daniel Rappaport's portfolio of once-awesome buildings that are underutilized and falling apart.
So, as you can see, this little segment of 11th Street fucking sucks. Even the sidewalk. Its too damned thin!

It wasn't so long ago that 13th Street was a shitty runway of alligator shit just like this block. The heroic Tony Goldman came along and, after some early setbacks, got the shitbag stores out of there in order to bring the right tenants in (though I'm still mad that Chicken King is gone). He also bought out a lot of the old slumlord owners. That's what needs to happen here. We can't force all those private owners to sell per se, but the right developer with testicles of tritanium ore could come along with an offer they couldn't refuse financially (which, unfortunately, is the very thing that many of these owners are probably waiting for).
The hardest part, I guess, would be getting the ball rolling. The super-ugly 23-27 South 11th Street is the best bet for a 11th Street Unit Block Revoution, since it is owned by the Girard Estate. They have three options for this space in my view. 1) Knock it the fuck down and rebuild on the same spot with some modern-kickass retail with residential above. 2) Buy the Sound of Market Building, knock 23-27 South 11th the fuck down, and build a modern addition to it, adding residential space and brand new retail space (that could hold a re-vamped Sound of Market!). 3) Sell 23-27 South 11th to a developer who has the ability to get some fucking work done and has a new idea for the space (which will most likely include knocking it the fuck down). The Sound of Market Building is currently for sale for 5.4 mil.
It only takes one or two things to get it all started. Once the revolution begins, the rest of the block will fall together over the course of a few years, just like 13th Street did after El Vez opened. That, a renovation of 1039 Chestnut and some streetscape improvements (wider sidewalk maybe?) and you'll have gold, Jerry! Gold! Don't get me wrong-- its not like all these cruddy stores have to die-- just move to a place where they would be more apt to find customers. After all, there's three fucking jewelry stores on the same block. Move to different blocks!
You want to know the best thing about this block? The whole thing is zoned CMX-5. You could build a goddamn crystal skyscraper 900 feet tall here and no NIMBY could say shit about it. You want to know the second best thing about this block? THERE ARE NO NIMBYS. No one lives on the surrounding blocks (at least, not yet), so there ain't no old codgers who will complain if this block changes. I know the Wurlitzer Building nearby was recently permitted for an apartment conversion, but its taking forever to get done. This means that the injection of nightlife onto this block would have very little resistance. Put a big-ass bar in the former Horn & Hardart space in the Sound of Market Building. There would already be a steady stream of auto-customers, since Friere Middle School is nearby (top of 1034 Market)-- any good bar owner knows that teachers like to fucking drink.
I didn't even mention the transit! This spot is less than one block away from the EL, a couple blocks away from Market East Station, and is passed by more bus lines than I can count (the 23 on 11th Street and the buttload of buses that come through Chestnut and Market, including NJ Transit stuff). Accessible by tens of thousands of people without getting in a car.
There you go-- now all you rich developers out there have no excuse to gather your shit and take a risk on this block. Your welcome. NOW GET IT DONE!!!
Posted by GroJLart at 10:02 AM