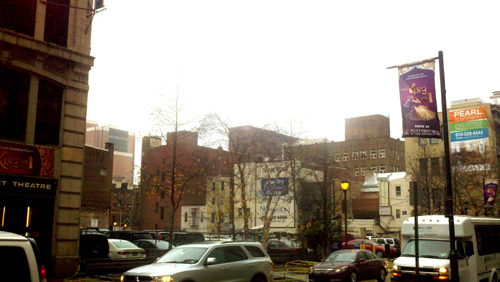 This right here is a shameful scar on the city. Right next to the Walnut Street Theatre and it still can't get filled in over all these decades. Though its not that huge, this lot can make you feel like shit... especially when you realize that this space has held a assload of other buildings over the centuries but can't get its fucking shit together today.
Like most of the blocks in this part of town, this one started as those humongous late 18th/early 19th Century mega-row-mansions. The facade of a small row of houses from the same era survive on the 700 block of Walnut.

In 1861, the lot's eastern end became home to a theater building called Wheatley's Continental Theatre. It burned the fuck down only 2 years later, so there's no pictures of it. They built a new theater on the same spot right away that had many names but was mostly called the Central Theatre. This one looked very similar to the Walnut. It burned down in 1867, was rebuilt, burned down again in 1888, was rebuilt, and then burned down AGAIN in 1892. That shit's fucked up, yo.

After the third fire, they said "fuck it" and built a much cooler looking theatre that prettied-up the block like a motherfucker for 42 years. It was a kick-ass design called Gilmore's Auditorium and then Casino Theatre. Once it was demolished in 1935, the Walnut Street Theatre Lot was born, albeit half the size.

In the 1920's a large Art Deco parking garage called the Bodek Garage was built in the space between 825 Walnut (still standing) and the Casino Theatre. It survived all the way up into the 90's. Parking garages were a lot better looking in the 20's.

Once the Bodek Garage was taken down, the full power of the Walnut Street Theatre Lot came to be, shaming Washington Square West ever since. In 2008, there was a glimmer of hope. The Walnut Street Theatre's leadership became interested in expanding the ancient building... not just an expansion, but a skyscraper!

They proposed a street-level addition that would include a new theater-in-the-round and  classrooms/conference rooms/ball rooms, topped off with a 517-foot skyscraper that would become the world's tallest retirement home!!! That's shit's craaaazzy! The architect was Heery International and the construction date even got set at May 2010. That date came and went like a motherfucker with no change to the lot. Is this a Dead-Ass Proposal or something that could actually still happen? Probably dead. There was literally zero news about this after the initial proposal at a Washington West Civic Association meeting.
What a shame... here we have a decades-strong empty lot that has seen the blocks around it be destroyed a rebuilt numerous times... at this point, anything getting built here would be a benefit. Even if the Walnut built the street-level portion of the skyscraper project I'd be satisfied. Fucknuggets!

Posted by GroJLart at 7:52 AM 2 comments

SEVEN FUCKING YEARS. That's how long this building stood. Seven. The fact that there's more than one picture of it just tells you how awesome this building was for the extremely brief period of time it stood. This was probably one of Willis G. Hale's best buildings, and anyone who reads this shit knows that THAT MEANS SOMETHING.
The Empire Theatre is an obscure-ass building to know anything about. Even the Philadelphia Architects and Buildings Project has nothing on it. In the late 1800's, there was a brief period of time when the area surrounding Broad and Locust Streets was one of the richest, cleanest, and most valuable parts of this city. The 1300 and 1400 blocks of Locust were off the fucking chain. The Historical Society of Pennsylvania (still there), Episcopal Academy (moved), Library Company of Philadelphia (moved and moved back), College of Physicians (moved), the Rugby Academy (still standing but different), and the Academy of Music were all in the same row.
In the early 1890's, it seemed logical that Broad Street could use some more theaters to take advantage of the situation. Info is spotty about how it all began but some sources imply that William M. Singerly, press tycoon and Willis G. Hale fan, had something to do with it. That makes sense. He owned the previous incarnation of the Empire Theatre that burned down in 1886 and Singerly and Hale worked together often. Hale had even designed his office. Like this:

The Empire Theatre was built in 1891, right across the street from the Academy of Music. The place was huge...one source says 546,000 square feet, which seems impossible. Of course, this is a Hale building, so anything is possible.

Large extravagant shows went on in this 1500-seater for almost the entire 1890s. Then, the development came. Once it was understood that the new city hall was going to be built nearby, the commercial core of the city started moving west, taking over the briefly rich-ass neighborhood. This corner of Broad and Locust became too damn valuable for a theater and the kick-ass Hotel Walton was built in this spot in by 1898, only seven years after the Empire was built.
What a building! If thing managed to survive into the 21st Century, people wouldn't even know that the Academy of Music exists. Good job, Willis. Good job.

Posted by GroJLart at 8:03 AM 0 comments

Constitution Place (aka The Mall Building)

Now here's a building that NIMBYs didn't work hard enough to stop. This ugly, out-of-place piece of shit was the first major building constructed in the city after World War II. You'd think they'd want to do a good job, but no, we get this pile of dirt.What a waste.
This building came about around the same time that the beautiful buildings of the 19th Century commericial district of Philadelphia were being destroyed one by one to make room for the Independence Historical Grass Lot Collection.  Here's the corner the building now stands on as it looked in 1954, one year before construction: 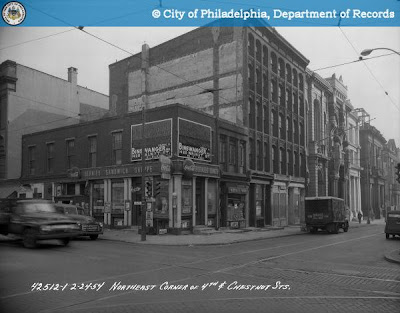 Frank Binswanger, developer extraordinaire, was ready to spend $6 million on a brand new office building that would bring the neighborhood surrounding the coming Grass Lot Collection into the 20th Century. The NIMBY's of the time heroically attempted to get it stopped. After all, at this point a shitload of beautiful buildings were getting knocked down and a few more that weren't even part of the park would have to get demolished for this new 13-storey piece of shit.
The developer presented rendering after rendering.. at first it was to be a red-brick facaded structure, but later it was decided that this new building of a new age should be glass and aluminum. New Orleans architect Charles Colbert was brought in to design this trash, which was going to be known as the Mall Building, even though it wasn't on Independence Mall nor did it contain a shopping mall. Coincidentally, Colbert had designed many shopping malls in his career. Here's a few of the renders:

Construction of this piece of shit finally forced its way through by the end of 1955.. the NIMBYs, who should have won this battle, lost. The building was finished in 1956.

Ever since, this pile of crap has stuck out like a sore thumb due to its ugly and unfortunate look. Because its on Independence Park, assloads of out-of-towners are subject to its embarrassing presence. Because Buddakan is one of the retail tenants, even famous people who visit Philadelphia are forced to find out how shitty our architecture can really get. What a pisser.
By the early 1990's, this building, though only 40 years old, was starting to fall apart. The offices got down to an 80% vacancy and it seemed like the shitpile's days were numbered. In the late 90's, however, Kaiserman Management Group, the same motherfuckers behind the creation of another prominent butt-fugly building, took over the place and renovated the fuck out of it, causing 100% office/retail occupation and the inevitable survival of a building that could have been demolished by now. Thanks, dick.
Posted by GroJLart at 7:36 AM 2 comments


This building is pretty kick-ass and you've got to appreciate how it managed to survive the total destruction and rebuilding of the block where it lives numerous times... but there is a dubiousness to this beast's survival... its just the front fifth of the original building.
Back in the early 20th Century, Thomas B. Lovatt and Sons was the king shit of auctioneers of Philadelphia. These guys auctioned off everything... land, property, estates, businesses, you name it. Give them enough time, and they'd auction your own disembodied asscheek back to you. In 1906, the business needed a new building that could hold their offices AND all the shit they were trying to auction off.
They didn't need to look very far for an architect because Lovatt family member George Ignatius Lovatt Senior just happened to be the most prominent church and cathedral architect in the entire region. This guy was used to designing big-ass buildings of worship, MANY of which still stand today. A little dinky building like this was easy as shit for him. He accidentally farted this design after eating a bad burrito.
The result was that kick-ass facade in the picture above and then a building behind it that would snake all the way back to Darien Street.
Less than 30 years after the Lovatt building was built, the block started into upheaval. The corner of 8th and Locust got completely demolished and rebuilt, but the building managed to be just slightly out of the way.
By the early 1970's, 75% of the block was either slated for demolition or had some crappy single-storey retail building on it.
By 1977, the ENTIRE block bounded by 8th, 9th, Locust, and Walnut was GONE save this building and its buddy next door. The long rear section of the building was taken down around this time from what I can tell.
In 1979, this building was semi-historically certified, as it  "Contibutes to the Historic District" of Society Hill. In the same year, the ugly-ass Postal Workers' House was built right next door.
In 2000, the parking garage attached to the Wills Eye Hospital was built just north of this beast. The building got historically certified (finally) in that year. Even after all that change, the block is not done. Site Prep has begun on a new HUP building that will be built over that parking garage, therefore causing this little auction house to survive yet another upheaval.
The Lovatt Auction House building probably didn't manage to survive this long by coincidence... the architect's son, George I. Lovatt Junior, was the city architect for the entire middle of the 20th Century. He probably had something to do with the mysterious ability of his family's building to outlast the generations. Well, good. The building is in use today as a doctor's office and apartments and will probably live on for at least a whole nother 105 years. Good fucking job.
Posted by GroJLart at 8:04 AM 0 comments