RDA, you are a bunch of fucking morons.

In case you missed it in the news today or on Naked Philly, the Redevelopment Authority is coming after OCF's Ori Feibush because he cleaned up a shitty empty lot with FORTY TONS of trash on it. They are seriously coming after a dude who spent $20,000 cleaning up 20 years worth of neighborhood trash. Is this the fucking Bizarro World? From this:

The RDA is actually trying to sue Ori F. about this. At this point, what is he supposed to do? Find 40 tons of similar trash and re-dump it in the lot? Whoever is running things over at the RDA is fucking bananas. In the news article, Ori states that he's attempted to purchase the lot numerous times and has been rebuffed. Fucking corrupt assholes... I guess he was supposed to hand over unmarked envelopes of cash to a certain person or run through a carwash of giant penises in City Hall to get this done. Instead, threats of a lawsuit for cleaning it up.
This makes the city look horrible. How the fuck are we supposed to improve this place if the city government itself does everything it can to stand in the way? What a bunch of corrupt shiftless bastards. I guess Ori's not in the Kickback Corruption Superfriends Club that runs this city. Make sure to tell everyone you know about this and remember this shit when in that voting booth.

Mystery Thing I Don't Know What to Call-- September 12th


Since the railroad-related Lost Mystery Building of the Week last week made such a stir (go read the comments), I'm coming back with another mystery for the rail nerds out there... if this is, in fact, a rail-related structure... I really don't know.
The Merion Avenue Thing looks like it might have been a bridge... but where's the rest of it? It doesn't appear on any old maps that I can find. From the top, the Thing looks like it might have an accidental green roof: 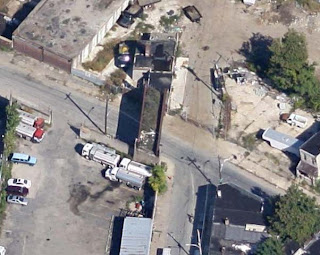 So what in the fuck is it? Normally I'd have a more than a few sentences to tell you about something like this, but I can't find ANYTHING. Its like this bridge segment once existed in an alternate timeline and was brought here by some kind of Einstein-Rosen Bridge. My best guess, according to old aerial photos, is that a small line that came off one of the 600 freight lines that once ran parallel to Merion Ave leapfrogged over the northern property and terminated at the southern one, using that bridge to get there. The Chalfont Coal Co. had that spot for quite awhile.. maybe they were the ones that built this thing.
That's just speculation... for all I know, it could be a bridge-shaped memorial in memory of a turkey sandwich. This shit is just fucked up. Whatever it was, no one ever seemed to have any motivation to demolish it.. and it doesn't seem to be going anywhere. Does anyone know? Anyone?

Posted by GroJLart at 8:15 AM 7 comments 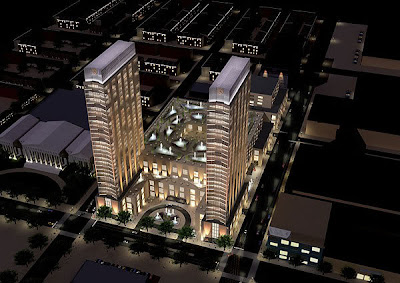 Broad and Washington--what a shitty corner. The largest set of empty lots near the city core, this pitiful corner is the subject of more Dead-Ass Proposals than any other. Here, we're gonna talk about the one that came the closest to happening-- a gigantic super-out-of-scale monster of a project that's probably better off dead.
Read more at the Philadelphia Citypaper's Naked City Blog!! 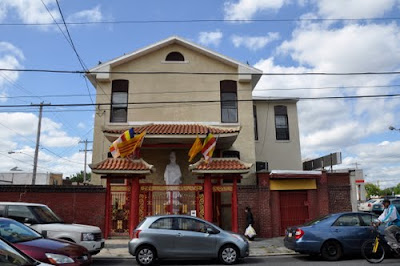 This little building sure knows how to survive... from school to club to temple, this everliving piece of shit is still rockin' your socks. Read more at Hidden City Philadelphia!
Posted by GroJLart at 10:40 AM 0 comments