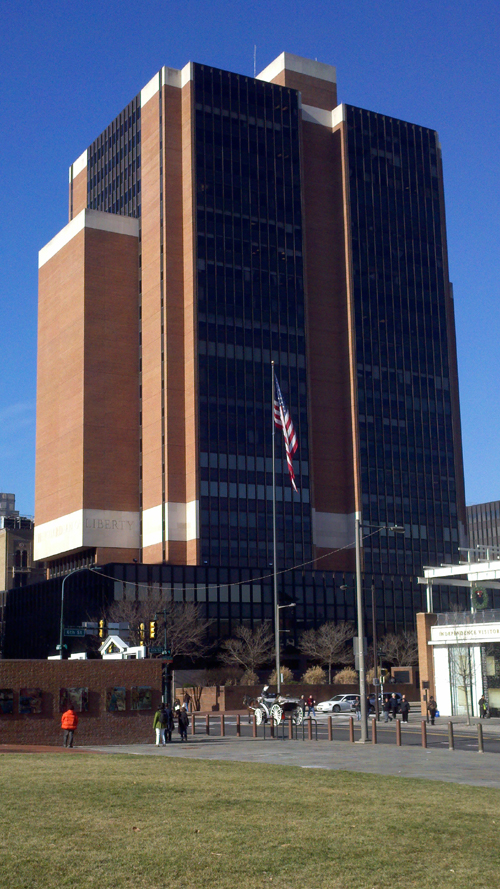 Is this supposed to be a courthouse? I wouldn't want this to be a shithouse. It looks like the Royal Tomb of King Butt. Even worse, this building has been consciously trying (unsuccessfully) to destroy itself.
Philadelphia is home to the United States Court of Appeals for the Third Circuit and the United States District Court for the Eastern District of Pennsylvania. In the late 60's, the Robert Nix Federal Courthouse/William Penn Annex Post Office Megalith at 9th and Market wasn't cutting the mustard. A new high tech and gigantic federal court building was needed. The Federal land next to Independence Mall was chosen for the location? Why? The Bicentennial was coming up, motherfucker!!!
The land surrounding the Mall must be cursed or something. Butt-fugler after Butt-fugler after Butt-fugler keeps getting built there. This giant bitch-bastard is no exception. Lots of visitors from around the world get their first impression of Philly architecture at the butt-ass Mall. King Kong's Butt-Plug here is the tallest and most prominent of the crappy buildings surrounding it.
Once proposed, a design would be needed. Who do you get to do a major Philadelphia building? A New York-based architect, of course. LZA Technology was chosen to design this shameful structure through their manz potz an' panz, Dan Peter Koppel and Associates.
The courthouse began construction in 1973 and took two goddamn years to build. The building, somehow aware of its own ugliness, immediately decided to destroy itself by any means necessary. Before it was even completed, it started to sink... burrowing itself underground so it would suffocate. The attempt was unsuccessful and the Fed sued the builder after it was fixed in 1975, jacking up the price of the building to $91 million.
After that, the building languished in ugliness for years, then attempted to drown itself. In the winter of 1993, the building froze its pipes until they burst, flooding a $3 million law library that had just opened. Again, the attempt was unsuccessful. After that, the building just said "Fuck it!" and started dropping bricks off of its facade. Five years of this really started to irritate people. In 1998, 25 million dollars of federal funds was thrown away replacing the roof, window seals, and THE ENTIRE BRICK FACADE.

The renovation took fucking forever and the building has stood silent ever since. In 2010, another $22 million dollars was burned "greening" it and the rest of the Byrne-Green Federal Complex. There's barely an original piece of this thing left.
The building has an unusual facade feature. A giant quote saying "Justice, the Guardian of Liberty" on it. It should say "Here come some bricks... ASSHOLE!!" This building has been called "the last of the luxury federal courthouses". There's nothing luxurious about this Stinking Monolith of Monkey Butts. I'd hate to see the ones that aren't considered luxurious. I don't know much about who James A. Byrne is but he must have been a dick if they named this Brick Bunghole after him. Fuck.

Posted by GroJLart at 6:41 AM 6 comments

After talking about the Edison Building II for this week's Old-Ass Building, I couldn't resist talking about the first one. This thing was a goddamn monster. Considering how long ago it was built, this literal Tower of Power must have seemed like a supertall skyscraper.
The primary reason that this Edison Building is different from the second one is that the first building wasn't just offices, it was a power plant too. In fact, it was mostly power plant: 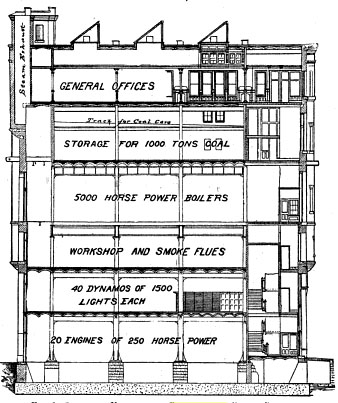 In the 1880's, electric lighting had become all the rage, and as a result, power plants couldn't keep up. A semi-corrupt trust of electric companies had a stranglehold on the industry, but couldn't keep all their customers happy. The Edison Electric Light Company came along jumped on the opportunity to take them out.  In 1888, they quickly commissioned a HUMONGOUS power plant would have to be built just west of the city's Central Business District of the time.
Edison got the Super Mario Brothers of Badassery, the Wilson Brothers, to quickly design a massive structure that could house electrical generating needs for generations. They hit back with an Imperial Castle of Power-Generating Cock-slaps the likes of which no Philadelphian had ever seen.

By the time it was hastily constructed, the plant that was supposed to fill needs for generations was already forced to run at 100% capacity. It was such a success, that only 4 years after being built, the Edison company was making the same amount of profits as the Electric Trust. Then came gasmonger and generalized badass Martin Maloney.
This rich motherfucker was tired of seeing multiple electric companies compete with each other, so he started his own that would rule them all. He created the Philadelphia Heat, Light, and Power Company in 1895 and immediately started to buy out competitors. Maloney's company merged with Edison Electric in 1896. A few massive mergers later, the Philadelphia Electric Company was formed in 1903.
PECO held their offices in the Edison Building, probably because it was near the Central Business District. At this point, the company was so huge that there wasn't enough space inside to keep them all. Offices spilled out into an annex building built nearby at 10th and Chestnut in 1907. After twenty years, even that building (which was pretty big) wasn't enough. PECO built Edison Building II in 1927 and stayed in both buildings until 1973.
The old Edison Plant stayed in operation until 1935, since it was one of the last places that generated direct current. It sat as a beautiful but useless hulk for seven years after that, being demolished in 1942. The Philadelphia Thermal Company put up the small power plant that still runs there today in the late 1950's.

After it was gone, everyone seemed to forget about it... finding details and pictures of this building is a huge pain in the ass. The next time you see that ugly-ass power plant on the 900 block of Sansom Street, pay homage to the Castle of Power that once stood there.

This right here is an empty lot that didn't start getting much attention until fairly recently. This undeveloped hole used to be able to hide and be unnoticed before the Convention Center Expansion, but now has come back into full fucking exposure.
Read more at the Philadelphia City Paper's Naked City Blog... click here!

Posted by GroJLart at 6:45 AM 1 comments


This building has always been a favorite of mine. Now taken for granted, this monster was once a famous Philadelphia landmark and tourist attraction. After decades of obscurity, the Edison Building is starting to get noticed once again. I'd tell you more, but Earth's Greatest Blog is now doing Old-Ass Buildings at Hidden City Philadelphia!!!
Here it is!!! Check it out.