Butt-Fugly Building of the Week-- May 31st

AAaargggh!! Another building named after its address. After talking about the Central Penn National Bank yesterday, I had a hankerin' to talk about the shitty building that Central Penn put its name on in 1969... this one. This ugly brown Klingbox was once considered a futuristic super-kickass Philly skyscraper. Well, age has not been kind to it. 43 years later, it looks like spunk.
The worst part about this one is that the facade is NOT concrete. Its actually limestone!! Limestone that looks just like the shittiest, dirtiest, smelliest concrete facade you've ever seen. How could someone fuck up this much? How could a building be clad in limestone but look just as fucked up as exposed concrete? What a disaster. Worse than a disaster. An Assaster.
This 36-story 490 foot assasster was originally planned in the 1950's by Edmund Bacon as yet another clone of One and Two Penn Center. As the years passed, everyone got sick of the same shitty box being built over and over again, so the later Penn Center buildings ended up being a little different. In the late 1960's, the Uris Buildings Corporation was ready to throw up a skyscraper in Philadelphia like no other.. a FIVE Penn Center. They just needed a tenant.
The Central Penn National Bank was tired of their 1401 Walnut location and ready to move into the new Penn Center office complex, which people thought was cool because of all the underground concourses and shit. They saw the new Five Penn Center as a way moving into the next generation. Some of the Great Satans of Philadelphia architecture, Vincent Kling's firm, decided to do something a little different this time. Their usual ugly box would be made taller, thinner, and have a groundfloor plaza that would give the illusion that the building was floating on air. It would be the same height as the PSFS Building, at that time the second tallest building in the city.

Kling's creativity was then stretched to the limit when they added a black box on the upper northern corners of the east and west sides of the building, along with a series of boxes along the back and around the middle. Wow! That's a huuuge stretch for Kling. It ends up they had help from another firm, Emory Roth and Sons. I will credit them with the extra touches.
This 681,289 square foot bitch-bastard got hastily built over the Winter of 1969-1970. Once complete, it became known as the Central Penn National Bank Building. Central Penn put a gigantic "CP" logo on the black boxes at the top. CP? What are they trying to say? Captain Picard?

Once Central Penn National Bank merged its way out of existence, the building took on the name Five Penn Center Plaza after the large pedestrian plaza that runs along the back of the building and was intended to keep going under the stilts to hold the building up. The problem with this plaza, which isn't that bad, is that from it you see THE BACK OF THE BUILDING.

The back of the building makes the front look like a goddamn Picasso. That's not concrete there, Young Bulls, that's limestone. A gigantic featureless limestone wall on the building's most visible side (due to the plaza). What fucking mistake.
In 1986, when Liberty Place across the street was under construction, the building owners decided that as a gimmick, they would rename the building after its address, 1601 Market, and charge only $16.01 a square foot for office space. It was a stupid idea. In late 1988 and early 1989, the lobby was enlarged by Cope Linder and took down a big portion of the street-level plaza under the stilts.
Today, the building is still pretty successful, probably due to its primo location. There were small renovations in 1999 and 2006. The building management actually has an online tenant handbook that's kind of fun to read. Despite being somewhat modernized and thriving, the building itself is still an ugly piece of orangutan dung. I say fuck it!!!
Posted by GroJLart at 6:20 AM 3 comments

Lost Building of the Week-- May 30th

This one's a goddamn heartbreaker. The Penn National Bank is a unique Furness treasure lost because some dumbass thought it would be a good idea to put a shitty reproduction of an older building here instead. This building deserves some props.
The Penn National Bank started on July 14th, 1828 as the Bank of Penn Township. Back before the 1854 consolidation of the coterminus city and county of Philadelphia, only the area from Vine to South, Delaware to the Schuylkill was actually Philadelphia. The rest was a series of townships, villages, and districts in Philadelphia County.

Well put all that shit out of your head because the Bank of Penn Township wasn't even located in Penn Township. Its original location was 6th and Callowhill, on the borderline of Spring Garden and Northern Liberties Districts. Eventually, they moved to 6th and Vine, on the border of Spring Garden, Northern Liberties, and Philadelphia. Why be named after Penn Township without being IN Penn Township? Ends up the founders of the bank were all residents of Penn. That's like if I opened a Bank of the City of Philadelphia in Kalamazoo.
The Bank of Penn Township was so badass that they profited despite massive embezzlement from the inside. In 1864, the bank went national and renamed themselves Penn National Bank. Penn became well known for predicting and surviving financial panics. In the decade after the Civil War (aka the waaah of naaahthern aggression), Penn National Bank was one of the only banks that showed a profit every year. The company grew exponentially over this time.
In the early 1880's, it was time to go big. They purchased the southwest corner of 7th and Market, where the Graff House (house where Jefferson penned the Declaration of Independence) was still standing, mangled beyond recognition and in really shitty shape. Penn National Bank respected that this was an historical site, and in order to make up for destroying it, promised an extra-ultra-kickass new building. In the 1880's, if you wanted a badass building, you went to Frank Furness.
Megatect of Ultimate Doom Frank Furness saw this building as a unique kind of challenge. He wanted to recall the 18th Century heritage of the space while also making an eye-catching design that would stand out as something special. He took an element of colonial architecture, Palladian windows, and went balls to the walls with them. Instead of just having one like old colonial-era buildings did, he put in four over-sizedass ones sticking out all over the place. Then he clad the whole motherfucker in stone and put those signature Furnessian details throughout. He even included a plaque commemorating the Graff House, right under where it says "Penn National Bank" on the facade. The Graff House was demolished on February 28th, 1883.

Once Penn National Bank opened here in 1884, people went nuts over it. Passersby marveled at how such huge windows could stay in place. Customers were over the moon about how much sunlight filled the banking floor. The bank saw huge success, surviving through massive financial panics in 1893 and 1907 while many other banks failed. Eventually, an addition was constructed on the back. Once the Great Depression came along, Penn was forced to merge with another bank, becoming Central Penn National Bank in 1930.

Shortly after that, the bank moved out and the building became a series of shitty luncheonettes and junk stores... it was mangled to hell, eventually getting to the point where people thought it had been demolished and replaced with a single-story building. The first floor would survive until 1974.
In 1947, the National Shrines Commission visited the site and lamented the loss of the Graff House. Rumblings stirred about rebuilding the house, but it wouldn't happen until the Convention and Tourist Bureau would set aside $2 million in 1968 and get it built by 1975 (it took seven years?) The reproduction of the Graff House that stands there today is a conjectural design based on an eyewitness account of the original's demolition that stated how its western half and upper floor were not present when Jefferson resided there. Therefore, what stands at 700 Market now is in no way historically faithful to the original house. They should've rebuilt the Penn National Bank there instead.
As far as Central Penn National Bank goes, in 1969, they were big enough to move to their own butt-fugly Vincent Kling skyscraper with their name and logo on it. How do you go from a Furness to a Kling? They still exist today as part of Wells Fargo.
This is such a goddamn shame. Though it was unrecognizable when demolished, I'd rather have the shitty mangled-up first floor of this building than the crappy colonial reproduction that replaced it. Frank Furness is crying in Valhalla right now. There there, Frankie.
Posted by GroJLart at 6:13 AM 0 comments

Bounded by 10th, 11th, Vine, and Wood Streets with a few extra sticking out.

This is one of those surface lots that can kill a neighborhood. Though I've talked about other lots that are conglomerations of separate surface lots, this one really takes the fucking cake. This empty hole is ELEVEN separate lots put together. That's rigoddamndiculous!
Read more at the Philadelphia Citypaper's Naked City Blog!
Posted by GroJLart at 6:51 AM 0 comments

Old-Ass Building of the Week-- May 28th 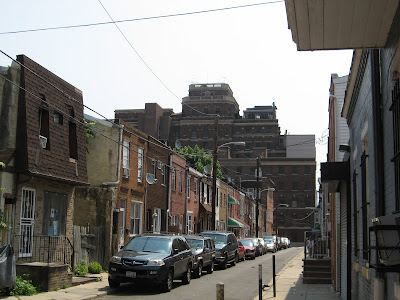 Known to most people as "That Big Abandoned Hospital", Mt. Sinai is the Divine Lorraine of South Philadelphia. This massive medical fortress was and still is the biggest and baddest building in Pennsport.
Read more at Hidden City Philadelphia!!!
Posted by GroJLart at 8:22 AM 0 comments