99 Years Ago in Philadelphia: Second half of September, 1915

A great moment in history, nearly equivalent to man walking on the moon, occurred in the second half of September, 1915. For the first time, the infamously nasty Philadelphia public school lunch was offered to students during the school day. Though the practice had been in place at some early community centers, children's homes, and settlement houses in the city, this was the first time that the toxic waste that all Philadelphia schoolchildren fear was offered at a Philadelphia public school.
The "penny lunch", as it was called, consisted of two choices: a pack of "quality biscuits" or a cup of coffee. Yeah, because giving coffee to schoolchildren is such a good idea. Some believed that providing lunch at schools had a two pronged effect: not only would it make kids learn better later in the day, it would also introduce immigrant children to American foods.
Shortly after this, another breakthrough was made when the lunchlady was invented.

In the second half of September, 1915, Charles Reinnhardt of 3919 Aspen Street was standing trial, accused of being married to two women at once. When Wife #1, Florence Reinhardt, took the stand to testify against her husband, she revealed that Mr. Reinhardt wasn't married to two women at once, but THREE!
It seems Reinhardt would leave his wives but never officially divorce. He married Florence first, living with her at 1510 Womrath Street until dipping out. He then shacked up with a young widow named Anna Preston, staying with her for only two months after their wedding in an apartment above his own grandfather's saloon. He then married on Helen Lutz, whose house on the 3900 block of Aspen Street he was living in when Florence finally caught up with Charles and had him arrested for bigamy.
This dude apparently never figured that his ex-wives would ever be able to catch up with him. He's fucked now.

Twelve-year-old John Storer Jr, juvenile delinquent from Kensington, sat in front of the Juvenile Branch of the Municipal Court for the umpteenth time. This time he was accused of running away from home, a much lesser crime than his previous antics. When Judge Raymond McNeill asked his mother how it is than little John became such a miscreant, she stated that his "worthless" father was to blame. Why? He gives Junior cigarettes, of which he smokes a pack a day.
Judge McNeill became pissed off about this, ordering a warrant for the arrest of John Storer Sr, whose residence was unknown. The judge then went on a tirade, claiming that a father giving his son cigarettes was no different than a store owner selling them to a minor and that he would prosecute the fuck out of him as soon as he was found.

Dead Man Returns To Piss Off His Family

In the second half of September, 1915, Mrs. Laura Redmond got a knock on her door at 1745 North 31st Street and got served with a Writ of Habeas Corpus from her dead husband. They had split 14 years earlier and he arranged to have their daughter, Louise, be put under the care of a convent in Baltimore. Mr. Redmond was then believed to have died en route to California.
When she turned 18, Louise escaped the convent, where she claimed her living conditions were "practically [like] a slave", and made it all the way to Philadelphia, where she re-united with her mother and lived with her. It only took two weeks for the deceased Mr. Redmond to make his re-appearance and demand through the courts that she be returned to the convent. When asked why this man would go through all this trouble to come back from the grave and bring court proceedings against his ex wife and daughter he had not seen for well over a decade, Mrs. Redmond said "To annoy us."

Birth of a Nation Hits Philadelphia Like a Bag of Hammers

Though the film Birth of a Nation premiered in February of 1915, it wasn't until August of that year that the film made it up to Philadelphia, where it played exclusively at the old Forrest Theater on Broad Street. By the second half of September, the film was so popular that tickets had to be reserved 2 weeks in advanced.
People were enthralled with the film, which was endorsed by President Woodrow Wilson himself. It had the first posthumous depiction of Abraham Lincoln on screen and displayed the latest in lighting and makeup technology. Other people were extremely offended by the film, since it glorifies the Ku Klux Klan and is rife with racist depictions and stereotypes.
In Philly, the protest of this film turned into a riot. In the second half of September, 1,500 black men, lead by "a tall negro clergyman" marched up Broad Street singing Onward Christian Soldiers until they reached the theater. The clergyman then waved his cane around and a brick was thrown. At this point, all the cops that were standing around the crowd were directed to shut the protest the fuck down.
They responded by charging into the crowd and cracking every skull within reach with their billy clubs. The crowd panicked and dispersed quickly, some protesters getting trampled in the fray. Others hid in building lobbies and interstitial alleys nearby. Many were severely injured.
The next day, a group of black men lead by lawyer G. Edward Dickerson and Dr. W.A. Sinclair limped their bandaged-up selves into Mayor Blankenburg's office and demanded that the City Solicitor bring suit against the Forrest Theater and prevent any further screenings of the film. They were unsuccessful. The same group later vowed that they would make their own version of Birth of a Nation, but it is unknown if they ever did.
In case you never heard of this Oscar-winning racist film or have never seen it, here's the film in all its glory-- all 3 hours 12 minutes of it.

Posted by GroJLart at 8:04 AM 1 comments 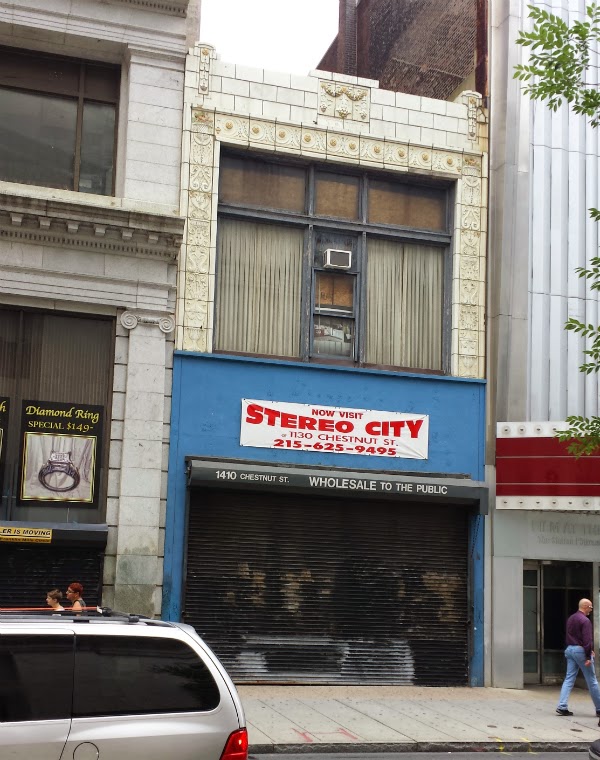 Posted by GroJLart at 8:04 AM 0 comments

This old piece of shit is one of two remaining public pools from the municipal bath house building spree of the late 19th and early 20th centuries. Learn all about it at the Hidden City Daily!
Posted by GroJLart at 9:15 AM 0 comments