And now... Manowar will sing about the Philly Skinny

WOW!!! What a quick and abundant reaction to the new Skinny! As of this writing, there's already 76 entries... with lots of stuff that even I didn't know about. That's awesome!! In honor of this great happening, Manowar will now sing Army of the Immortals with new lyrics... click the youtube video below for the original version. New lyrics are below.

Philaphilia did sound the call.
You came to our side.
You heard true Philly-into glory
Ride!!!!!!
C'mon yeah!!

You stood beside us the NIMBYs
Cried.-Your love is judgment.
You gave us life.

We have read your submissions-
We have heard you all.
We were brought together-
Cause we've got the balls-
To call out the loudest buildings.
So hard and so wild and mean.-
You'll build forever we were
Born from your steel beams.

Philaphile Michael Burlando has taken on the challenge of creating a new Phillyskyline-style Skinny!!! This Skinny, instead of being the painstaking effort of a single mind, will be crowd-sourced so that everyone can contribute-- keeping the thing as accurate and up-to-date as possible. Since its just started, there's only a few things on there right now-- so its up to all the Philaphiles out there to submit projects and get this thing complete!!

Posted by GroJLart at 8:56 AM 3 comments 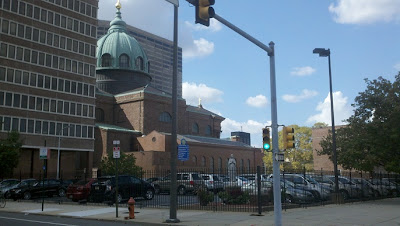 You can gussy it up with all the trees and statues you want, but its still a shitty surface parking lot. For the last 40 years, this lot, which had a perfectly good historical building on it, has been sitting empty, collecting dust (and cars). This lot needs a future... and fast.
Read more later today at the Philadelphia Citypaper's Naked City Blog!
Posted by GroJLart at 8:18 AM 1 comments

Fix the Avenue of the Farts!

What the hell is going on with South Broad Street, the so-called Avenue of the Arts? It sure is looking like shit nowadays. Improvements to the streetscape made a little over 20 years ago have gone un-maintained and are falling apart. Abandoned buildings and empty lots are all over the place. I'm not even talking about the pitiful southern portion from Pine to Washington. I'm talking about the northern part, the part that should be the showcase of our city!!!!
I was inspired to write about this by a thread on the Philadelphia Speaks forum. It was something I didn't notice until I read that thread... I was so accustomed to the way South Broad looked that I wasn't seeing how the 1990's improvements were coming apart at the seams. Here's a little bit of what I'm talking about:

With our tourism level higher than ever (almost 10% of the U.S. population visited the city last year), the Avenue of the Arts should be looking better than ever... instead it looks worse it has in 20 years. This is crap.
Part of the problem is that South Broad is having no shortages in visitors/patrons/tourists/residents. On paper, its doing just fine. Therefore, priority for planning and repairs seems to be going to other parts of the city (and other parts of Broad Street). Nonetheless, South Broad is still rife with problems that need to be solved... and fast!! Sure, those sidewalk and street problems are costly to solve.. but what about this?

Almost every median on the strip has wildlife breaking through. Maybe the street is trying to tell us something? Would it be extremely costly to go out there and pull up those weeds? Maybe I should just do it myself. Better yet, get all that fucked-up concrete out of there and plant low-maintenance plant life that will make the median look nice and keep people from walking down the middle of the street. You only need the part by the crosswalk to be walkable.
On top of all this shit, you have all the empty lots and abandoned/fucked up buildings... specifically on the eastern section between Spruce and Pine.

The two buildings on the left are a goddamn tragedy. You have 311 South Broad, a great old theater that's been empty and falling apart for many years (whose recent L&I warning stickers have mysteriously disappeared), and the building at the corner of Broad and Spruce (to the left of the picture), which can't get itself repaired for some reason. The "developer" that owns these two properties, who shall remain unnamed, also owns a shitload of valuable empty lots and blighted buildings. This particular organization seems to get some kind of special dispensation from the city, continuing to get charged with neighborhood redevelopment projects despite being either unwilling or unable to REPAIR THEIR OWN GODDAMN HEADQUARTERS. For all the good deeds that "company" has done elsewhere, they still haven't made up for this shit.
Next to these two pieces of embarrassing blight sits and empty lot owned by the University of the Arts, who tried to build an 189-room dorm here, but got completely rebuffed by a group of NIMBYs who lied through their teeth... I wrote about that shitty saga here. UArts isn't completely innocent, though. They're also responsible for a shitty building on this block, Anderson Hall.

This has to be the worst facade restoration in the history of facade restorations. This building used to be beautiful... it had a huge cornice and a nice street-level look. For some reason, someone ripped all that shit out and replaced it with some kind of ribbed black paneling. That's crap.
Maybe I'm overreacting here... maybe there are all kinds of plans for this stretch of Broad that I don't know about... nonetheless... if something isn't done soon, this will be the new Market East. Market East improvements are coming down the pike right now... is it possible that in 20 years, South Broad and Market East's roles will reverse? That would be a horrible. Just horrible.
How about revisiting and tweaking the Vision for South Broad Street from 1999? It has all kinds of great ideas... especially for the part of South Broad I can't even talk about (Pine to Washington). We need to get the ball rolling right now to get this fucked-up street fixed before it REALLY goes to shit.