Look at this sexy thang. Check out that corner roll... they don't do that shit anymore. Balconies without overpowering the facade... Street level retail... L-shaped and wrapping around the corner for the illusion of mass. Pretty fucking nice.
In 1880's Philadelphia, the first generation of young wealthy trustafarian hipsters had nowhere they could safely call home. They grew up in mansions, and when they were old enough to be out on their own, weren't about to live in no fucking normal rowhome like the peasants. They sure as hell weren't going to live in an insecure apartment like a damn dog.
The need for housing this new demographic with lots of disposable income whet the appetites of real estate moguls. Several new high-tech luxury apartment buildings popped up in rich parts of the city. The first of these was the Gladstone in 1890, designed by the Grand Marshall of Meat-beating, Theophilus Parsons Chandler. 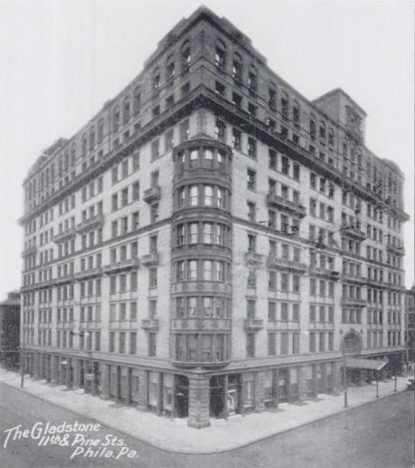 During the extremely brief period of time when Washington West was a super-affluent neighborhood, this Hanging Gardens of Gatling Guns was built to house the spoiled offspring of railroad tycoons and shit. It became known throughout the region for the simple fact that it was a highrise with fucking apartments in it. Before the Gladstone, Philadelphia had no such thing.
Chandler had designed big-ass mansions and other flashy shit before, so he knew what would attract a lazy 21-year-old laudanum-addicted hipster. He made it highly luxurious and it had high-tech gadgets like a fire-suppression sprinkler system and a 6-ton refrigerator. Today that would be like your apartment building having a fusion generator and orbital elevator.
Over the years, the Gladstone went from super-luxury apartment in the best part of town to crappy extended stay hotel in an okay part of town and then finally a shitty day-rate hotel for med students, bums, and transients. By the mid-20th Century, it was falling apart and became a victim of a really shitty neighborhood. You can read about how mega-crudulous that area was in 1961 here. In an attempt to improve the shitty area, the Gladstone was knocked the fuck down in March of 1971.

The corner of 11th and Pine became an empty lot until it was replaced with a concrete slab with a few plants on it called Louis I Kaaaaaaaaaaaaaaaaaaaaaaaaaaaahn Park. In the 1980's the park got upgraded to its current appearance thanks to a bunch of nosy neighbors with a lot of dough. Kaaaaaaaaaaaaaaaaaaaaaaaaaaaaahn Park is nice but I'd much rather have a 10-storey Victorian building from 1890. I understand to some extent why it was destroyed but other formerly crap hotels in the neighborhood still live on as condos or apartments. The Parker-Spruce two blocks away is still rockin' the sleazy day-rate transient business model and doesn't seem to be going anywhere. A small park is better than that, at least.