Now this is one sorry-ass piece of land. The area around it on Spring Garden is finding ways to improve, but this shitty lot is stuck in development limbo, probably forever. Hopefully, as progress continues in the Loft District and other parts of the neighborhood, this shit-lot will finally give way to some construction. The only thing that's historically cool about this lot is that it once had a building that had a giant cast iron statue of Henry Clay on it.

In more recent history, the lot has held a brass works and a lumber yard. Someone tried to build a fast food restaurant here awhile back but the Chinatown Neighborhood Association kicked the shit out of 'em. In the mid '00s, the lot was purchased by a developer called Lucky Garden. Lucky Garden built a large mixed-use development on the block to the south, but left this 2 million dollar 30,698 square foot parcel bare as fuck.
This lot is a locational goldmine. The confluence of three well-trafficked roads: Ridge Ave, 12th Street, and Spring Garden Street. The lot is zoned heavy industrial and probably needs environmental clean-up, which might be what has held back development here. Though this area actually counts as Chinatown North, I say fuck that and build something here that could be the gateway to the Loft District.
There's not much else to say other than BUILD NOW!!!!!!!!!!!!

Posted by GroJLart at 7:47 AM 3 comments

This thing was cool. The one on the right still stands, but the one on the left is gone. Just check that shit out. It would be great if the building was still complete. I guess this article counts as an Old-Ass Building of the week as well, since the addition to the original building still stands.
Dr. James Rush, crazy-ass creator of the Ridgeway Library building at Broad and Christian, Treasurer of the U.S. Mint, and medical doctor, designed his own gigantic damn house in 1847. So on top of all that other shit he did, he's also an architect. It was so gigantic that it took three years to build, 1848-1851. Once complete, it was capable of holding 800 guests for the huge balls-out keggers the Rush/Ridgeway rich-ass family would have there. After Rush died (in the house) in 1869, Philadelphians wondered what the fuck would be done with it.
In 1875, the massive house/monster was put up for sale. Those trustafarian Lippencotts purchased it for $110,000 and opened it as the Aldine Hotel in 1877. They eventually got the design firm of Yarnell and Cooper to alter and expanded the building in 1887. They ripped off the facade, applied a new one, and added floors to the building.
The hotel was one of the most luxurious in the city, and partially served as an extended-stay location as well. In 1893, a fire consumed part of the structure. The weight-bearing walls of the place became damaged, and Mega-architect of Doom Addison Hutton was brought in to renovate the whole building and also design a huge (still standing) addition in 1895. When the hotel re-opened, it was the most badass motherfucker in town.

In 1909, the hotel became the object of what we've been calling a Flash Mob here in Philadelphia. Ty Cobb was staying at the hotel at the same time that Connie Mack was campaigning to have him banned from baseball. Thousands of people swarmed the 1900 block of Chestnut Street to kick his ass. A 12-man police escort was needed to get him out of there.
Less than 20 years later, the original part of the hotel was gone. No one seems to know the actual demolition date. I know it lasted until at least 1923, since there's a picture of it from that year:


I also found one account from 1927 describing the building as "recently demolished". Once deleted, the original Aldine was replaced by the Boyd Theatre and a bunch of crappy one-storey storefronts. Nowadays, that stretch of Chestnut is improving but still isn't as nice as it was in the 1890's. The question remains... what happened to the Aldine? Fire? Sold and demolished? What the fuck? How did the addition survive but not the original building? I guess this article counts as a Mystery Building of the Week as well!
Posted by GroJLart at 6:22 AM 2 comments

These two buildings prove that the 1970's plus architecture multiplied by Vincent Kling = Shit! These two concrete Boredom Boxes are what you get when Kling is trying to be creative. No matter how many times they redesign or renovate the plaza between them, these two buildings sit there looking like shit.
It started in the late 50's and early 60's. Ed Bacon was looking for an architect that was dumb enough to commit to a huge redevelopment plan that had no backers and no budget. Louis Kahn was asked but he was like "FUCK no!", so they went with Vincent Kling. By 1967, Bacon and Kahn managed to take down some of the city's most beautiful buildings and replace them with flat-ass boxes. One of the only relics left was the former site of the Harrison Building, a perfectly preserved 19th Century awesomecastle which had been demolished in 1969 for these pieces of shit.
Developer Jack Wolgin jumped on the opportunity and wanted something more than a box from Vincent Kling. Kling came up with two slightly different boxes with the corners cut off connected by a lobby/plaza thing. That was as far as his creativity could go.

Now, I must say that the original plan for these things was for them to be covered in a facade of stainless steel... this would have given the buildings a little more style... but when the project started running over budget, Wolgin said "Fuck it, we'll do it live! Make it out of concrete! WE'LLDOITLIVE!!!! Fuckin' thing SUCKS!" Construction began in 1972.

Wolgin loved shitty art so he commissioned the crappiest garbage he could think of for the percent-for-art requirement. The most infamous of these was the big-ass clothespin by Claes Oldenburg, while the others, a DuBuffet and a Calder are so unmemorable that no one even cares to think about them. Once complete, the building complex was considered super-asstastic awesome. Companies moved right in, the largest being Towers Perrin, a "consulting" firm that is still there. The buildings are credited with bringing big business to west Market. Whoop-de-shit.
In 2002, the complex was sold to a new owner and they eventually got Daroff Design to create a new lobby and plaza for the building a few years later in order to make it less butt-fugly. The new plaza works a lot better than the old one, but the towers remain brown stained pieces of shit. Wolgin should have plunked down the extra cash for some stainless steel instead of that shitbag sidewalk they built them out of. Dumbass.
Posted by GroJLart at 6:16 AM 1 comments 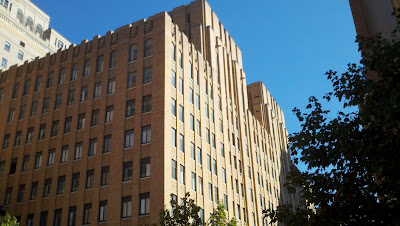 Posted by GroJLart at 6:56 AM 0 comments