This is one of the most disappointing Dead-Ass Proposals ever to hit Philadelphia. This project wasn't killed because of NIMBYs, zoning issues, or crooked developers. This one died an agonizing, ass-achingly painful death. People might have been pissed off about the construction of the Barnes Museum, but at least that got built and is kicking ass all over the place-- despite being in a butt-fugly building. This one didn't even get that far.
Read more at the Philadelphia Citypaper's Naked City Blog!!!

Posted by GroJLart at 7:51 AM 0 comments 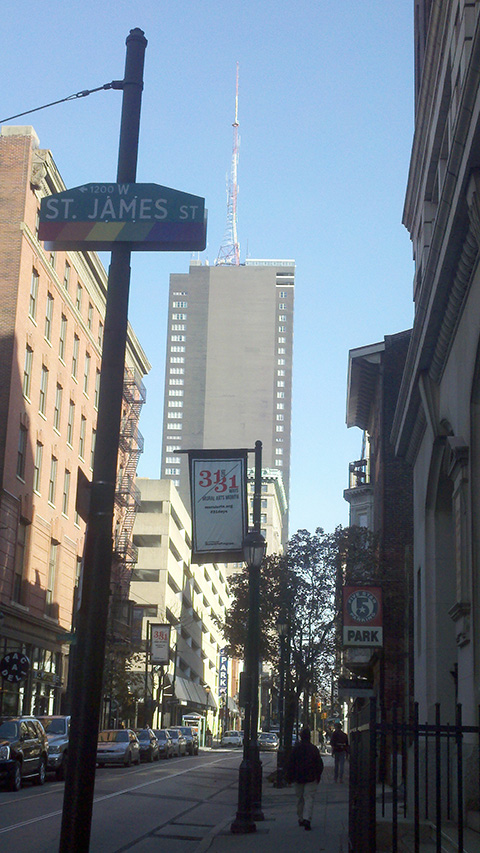 I've always hated the humongous blank party wall on the PSFS/Lowes Hotel Building. I know its just the back of the elevator bank, but fuck... they couldn't think of something better? When I first moved to Philadelphia in August of 2003, I lived at the Arts Tower (originally the Sylvania Hotel, now called the Arts Condo) at 1234 Locust. I had a great view of the ugly-ass Interpark Parking Garage, the butt-fugly Holiday Inn Midtown, and that shit-ass blank party wall.
That big black party wall really fucking irked me... it was the worse thing I saw out my window that year besides that time I saw a guy shot in the chest at point-blank range in the middle of the night. Just recently, the dude at Streets Dept made the SUGGESTION that the huge blank wall on the PSFS should have a mural on it... not just any mural, but the nation's largest. That little 150-word post made the entire Philadelphia blogosphere and media LOSE ITS FUCKING MIND:


Inga flips her shit
Art Info has a goddamn coniption
Philadelphia Speaks holds some milk and makes a milkshake
The Second Grade Level Metro exposes the tweet and blog wars about it
The Clyde Fitch Report snobs the fuck up about this "terrible, terrible idea"
Barstool sports gets on its high horse
﻿
... and that's just a few of them. To add insult to injury, people who support the idea figured that the shitbird behind those buttsmack Love Letter Murals or this other fuckbag (whose stuff is not that bad) should be the ones that execute this theoretical mural. Some guy named Mike Meulstee then made a mock-up of what it would look like: 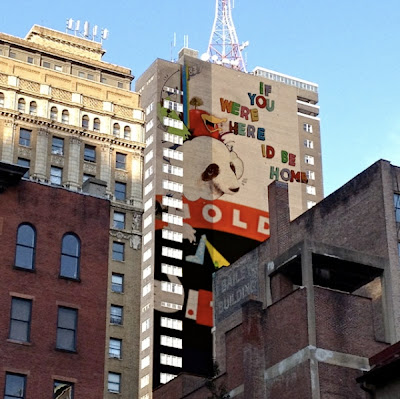 Well, of course people didn't fucking like it... that looks like crap. That mock-up basically confirmed the fears of people that think the PSFS is too sacred for a mural. I agree that this building is iconic and probably doesn't NEED a mural. But that doesn't mean I should jump out of windows and flagellate myself over it... people are going fucking apeshit like they built the building themself. When's the last time you've heard ANYONE. EVER. mention the BACK of the PSFS Building? Half those articles I linked to above don't even show the back of the building.
So, since everyone has been asking me lately what I thought about it... I'll say this: I don't hate the idea. I think it could be quite good if it was done right. Its not like they want to put it on the front of the building. As far as I'm concerned, the PSFS was ruined in 1947 by the installation of that 300+ foot antenna. No one seems to give a shit about that...
I think we should all come up with ideas of what could go on the wall. Photoshit your best ideas and send them to me at rhaandarite@gmail.com. They can be by known artists, unknown artists, or yourself. I'll post a nice gallery of the ideas to show the possibilities of what could be done here. Here's how it would look if David Choe got a crack at it: 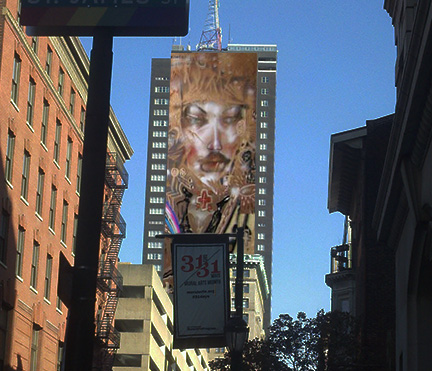 Or maybe it should be kept simple:
I guess the point of this post is to tell everyone: Calm the fuck down. It's not that big of a deal.
﻿
Posted by GroJLart at 11:44 AM 9 comments