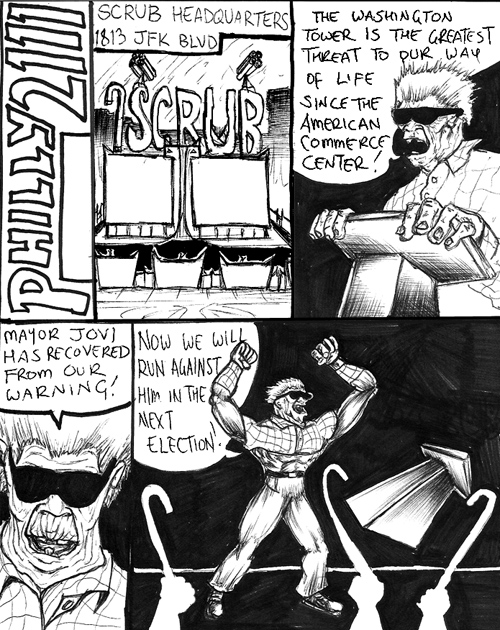 Posted by GroJLart at 9:51 AM 0 comments


Bounded by N. 23rd St and the Schuylkill River, JFK to Cherry Sts.


What a piece of elephant dung this lot is. I call it the Schuylkill Sea because describing its location otherwise is as confusing as the non-ending of Limitless. This grimy dirt hole is so expansive that it even extends under the Cuthbert St. elevated train tracks.
This stinky lot, located at a convenient spot within the northwestern corner of Center City, sits as a monument to waste and uselessness. You would think that SOMEONE would do want to do SOMETHING with this used condom-catching mega lot, and you would be right. However, you will forget that there is something so powerful, so evil and so old it can stall any kind of positive city growth… that’s right, you guessed it, the NIMBY. Back in 2006, a humongous and frankly unrealistic plan came along to build 10 buildings over 15 years to create a beautiful mixed-use Philadelphia River City. Here’s a render:

Lost Building of the Week --April 20

This week’s Lost Building comes from that stinking runway of alligator shit known as North Broad Street. Broad and Girard, known to modern Philadelphians simply as “shit”, was once the gateway to one of the more wealthy areas of the United States. Nouveau-riche Captains of Industry who actually acquired their ill-gotten gains by their own ingenuity (and lack of income taxes) were forced to build their opulent mansions on North Broad because the old money trustafarian hipsters of the period rejected them for having to go to work.
Peter Arrell Brown Widener, who was basically a Four-Star Admiral of Industry who worked his way up from nothing, called on the architectural stylings of the First Baseman of Badass, Willis G. Hale, to design the biggest, baddest, most ballsy mansion possible in order to thumb his nose at those spoiled hipsters in their 100% organic sustainable cummerbunds. Just look at that picture. You can imagine Widener standing on the conical tower in the corner with his arms crossed laughing “BWAAHAHAHAHAHA!!!”
Thirteen years after this Monstrosity of Manliness was built, Widener said “Fuck it, this house is too small… I can’t even fit my personal polo team in here without getting horseshit everywere!” and moved into a 110-room palace out in the country. He donated this Tower of Testicular Fortitude to the Free Library in 1900 and it served for 46 years. After that, the mansion was used for various functions until a bunch of dirty squatters burned it down in 1980. The location is now the home of a bulletproof KFC and a Checkers where an employee murdered a patron. Classy.

Butt-Fugly Building of the Week-- April 19

It’s a grey box. What more can I say? It’s a grey box. This piece of piss has EVERYTHING going against it. It’s like a million miles from the sidewalk so you have to look at it for like 10 seconds before walking in. That hurts. The reason it’s so far from the curb it because of another point against it: It has a surface lot right in front. It has one little row of windows. It’s like 3 feet tall.  What a pile of garbage.
I’m not the biggest green roof fan but if any building is begging for one (besides the Convention Center) it’s this one. Shit, you could fit a football field up there. The only thing worse than having a parking lot in front is having the blank walls in the back come right up to the sidewalk. No wonder there’s surface lots across the street. Who would develop something that faces the blank back of an ugly-ass short building?                                         You’d think the PPA would use some of their Parking Wars money to move out of this shitbox into a newly constructed highrise. The PPA has enough money to build 50 Comcast Centers and staff them with 50,000 inept employees, so they should do it. Fuck ‘em.
Posted by GroJLart at 7:33 AM 0 comments

Old-Ass Building of the Week-- April 18

Hyatt at the Bellevue(formerly the Park Hyatt at the Bellevue, Hotel Atop the Bellevue, the Fairmont Hotel, and the Bellevue-Stratford)
200 S. Broad St.
Now here’s some nice shit. Two hotels, the Bellevue and the Stratford, lit up the 100 foot wide dirt and domestic animal shit strewn Broad Street of the 19th Century. In the best merger until Hulk Hogan and Randy Savage had a tag team, the two hotels combined to build a massive French Renaissance Supercastle in 1904. This wasn’t just any hotel… in 1904 a hotel of this size and elegance makes the seven-star Burj Dubai look like a rundown Days Inn with a country western bar in it.
Back in the day, the Bellevue-Stratford was the finest-ass hotel you could stay in ANYWHERE. When it opened the normal hotel room had Tiffany fucking glass lamps with bulbs made like 3 days ago by Thomas Edison himself. That would be the same as a modern hotel room with a holodeck and an android hooker.  On top of that, when it was first built, the Bellevue-Stratford was one of the tallest buildings on the Philadelphia skyline… so if you did get the 11-room Royal Suite/Ultimate Five-in-one Mega Sky Fortress, you would be able to confirm your Mastery of the Universe as you looked down upon the sheep being herded along Broad Street.
The super-rich trustafarian hipsters of the era made this their Philadelphia homebase. Parties, cotillions, banquets, conferences, grand balls, presidential visits and orgies of the rich and famous went down inside this Parthenon of Pussy Punching. The place was so badass that in 1948 both the Democrats and Republicans had their conventions there.
In 1976, as an act of God-Tier Badassery, the Bellevue-Stratford became the origin point to a whole DISEASE. That’s right, this Embattlement of Ball-Bludgeoning is where Legionnaire’s Disease was first spread; infecting 221 and killing 34. How many other awesome buildings have killed people through bacterial infection?
Today, the building is functioning as a mixed-use hotel/office/retail powerhouse. The façade is crumbling and hurting people, another example of how this building keeps wanting to take people out.

Posted by GroJLart at 7:21 AM 0 comments