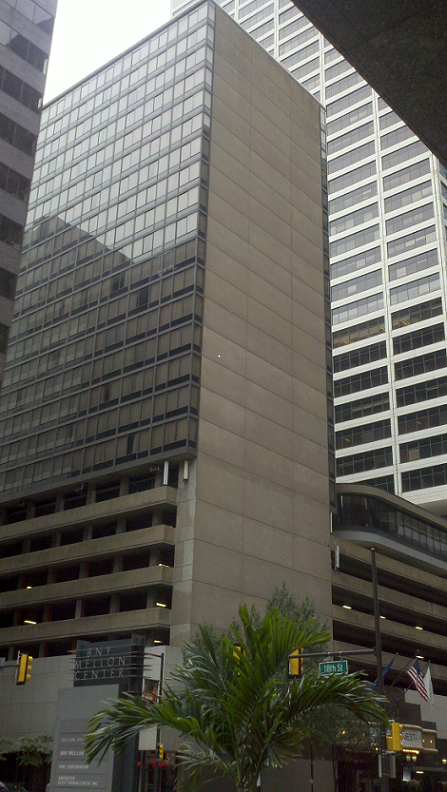 Posted by GroJLart at 6:12 AM 6 comments


Just take a good look at this big motherfucker. This thing is unbelievable!! Arched windows all over the place.... mansard roofs, small details everywhere. The 15th and Chestnut YMCA was the SHIT. Unfortunately, it stood for less than 50 years.
In the late 1800's, NYC's 23rd Street Branch of the YMCA was an experiment in how badass the YMCA locations could be if tons of money were thrown into them. The 23rd Street Branch was a mansard-roofed mega-castle with libraries, auditoriums, and, revolutionary for the period, a gymnasium. As it was constructed and opened in 1868-69, Harper's Weekly, the "Journal of Civilization", featured articles and drawings of every part of the building.

As Harper's Weekly spread knowledge about this building across the world, people became extremely impressed with the idea of a Christian-based organization that could offer all this shit in such a luxurious space. Like the Mercantile Library, but with Jesus!! The articles in the Weekly purposefully neglected to write about the gymnasium because it was considered too bold for the country's sensibilities. Also too bold was the whole motivation behind the building: focus on the secular qualities of the YMCA instead of the religious.
In the early 1870's, many other cities started to plan their own badass YMCA super-buildings, and Philadelphia was one of them. A competition was held for a design with recommendations from the dudes who designed the NYC version. The winner was Super Arch-megatect Addison Hutton. The YMCA's leadership thought that all the other designs, which had a tower in the corner, looked too much like a church. They chose Addision Hutton's design because it looked more secular (and more badass).
The gigantic building would make the NYC one look like a grabasstic pile of horsetrash, even though its meant to be a sequel to that design. It would cost $500,000 and take 3 years to build.

Once the five-story monster opened in 1876 at the southeast corner of 15th and Chestnut, it boasted a 1,300-seat theater, three floors of offices, a gigantic gymnasium with soundproof floors, a big-ass library/reading room, an employment center, and a bowling alley... all sitting on top of retail storefronts. Critics of the time bashed it for being too similar to the NYC one, but fuck them. This building was to that one as Star Trek: The Next Generation is to Star Trek.
The new YMCA was a massive success. Its location proved valuable once the Central Business District moved over to the neighborhood, following the construction of City Hall. Unfortunately, the success of that CBD is what killed this building. The YMCA moved a few blocks north in the early 20th Century and the 15th/Chestnut megamonster was converted into a mostly-office building under designs by Hutton and was renamed the Wilson Building.
One piece of the interior salvaged from the original design was the theater. It was knocked down to less than half the original size (1300 seats to 600), but stayed in use as the Colonial Theatre.

In 1920/21, the old YMCA was demolished in favor of the also-badass Packard Building that still stands on the spot today. Bummer. Its a shame that we should lose a building as awesome as this... I wonder if it would have lasted past the Ed Bacon era. Oh well... this awesome building is GONE. Get used to it.

Posted by GroJLart at 7:02 AM 1 comments 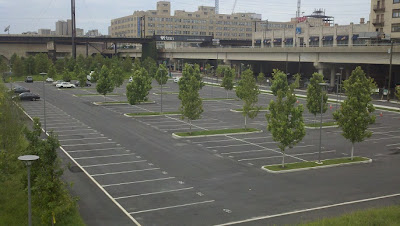 Ok, so this empty lot is not THAT big of a deal... or at least it seems like it. I mean, Penn Park is awesome, right? Why should I be mad that it comes with a huge surface parking lot? It reduced a 10+ acre surface lot into this comparatively small one...what's the big deal?
Found out at the Philadelphia Citypaper's Naked City Blog!
Posted by GroJLart at 8:11 AM 3 comments 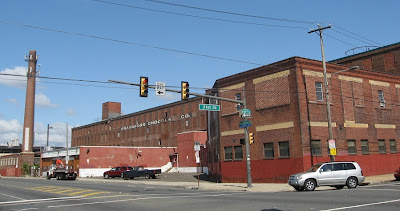 This big motherfucker is a lot older than it looks. Though its been through a rough patch this last 15 years, the big-ass Frankford Chocolate building is about to see some action. Read more at the Hidden City Daily!
Posted by GroJLart at 8:47 AM 0 comments