At the start of October, 1915, the Wistar Institute created an uproar when one of its scientists, Dr. Helen D. King, determined that incest produced healthier offspring. How did she come to this conclusion? She experimented with rats. She interbred 21 generations of white rats and found that 30 percent of the 21st generation were bigger, stronger, and healthier than the originals.
This finding freaked people the fuck out, which led them to run to their clergymen and ask if there was danger that the laws regarding familial intermarriage would change. The clergymen from every religion and denomination in the area then collectively went nuts, discussing it with each other and then with the public. Though none of them thought that this finding would lead to a change in the law, some feared that an evil force my one day attempt to breed a race of supermen through generations of incest.
Other clergymen calmed the panickers down, stating how the fucked-upedness of the royal families of Europe prove that incest is definitely not best-- no doubt Carlos El Segundo got a mention.
Dr. King got lots and lots of backlash and hatemail over this subject for the next several years. It got even worse in 1922 when she got even more generations of inbred rats going, creating a race of mega-rats. She eventually dialed back her opinions on inbreeding and focused on domesticating the Norway rat, for which she got much acclaim. One reporter wrote about her, amazed that "one of the greatest authorities on rats in the country is a very human and thoroughly feminine woman".


Phillies In the World Series!

AAAAAaaaaaaw shiiiiiiiit!!!!!!!!! For the first time, the Phils are going to the World Series! The first two games were scheduled for National League Park a.k.a. the Baker Bowl and Broad and Huntingdon, where the Phils would have homefield advantage against the Boston Red Sox. The Baker Bowl only had 19,000 seats at the time so William Baker refused Boston's request for extra tickets for visiting fans. When Baker met the owner of the Red Sox, Joseph J. Lannin, at the official ceremonies announcing the dates, rules, and locations of the World Series, he offered him a compromise but was flatly refused.
After arguing and cursing each other out for several minutes, the National Commission finally ordered that Baker give in to Lannin's request for more tickets. Baker ended up having 3,000 extra seats built into the Baker Bowl to help accommodate everyone.

This World Series was a big fucking deal and brought tons and tons of people to the city even though only a limited number of tickets were available. A whole mess of scalpers ended up getting arrested and Suffragettes proselytized to the huge crowds of people that milled around the Baker Bowl during each game.
The Phillies won the first game in the series but got their asses handed to them in the next three. It should be noted that this was the second year in a row that Boston beat a Philly team, being that the Philadelphia A's (colloquially known as the "Macks" back then) lost to the same team in the Series of 1914. This 1915 World Series was the only one the Phillies would be in until 1950, where they got their dicks kicked in even worse by the Yankees. The Phils wouldn't even win a single post-season game until 1977 and wouldn't win a single World Series game until 1980. The Phillies just love to suck... I guess that's why we all love them? Read more about the 1915 World Series here.

It was a dark and stormy... day. Two jewel thieves that had been plaguing jewelry stores all over town saw the weather as a good opportunity to smash the window at the Kennedy & Bros Jewelry Store located at the southwestern corner of Juniper and Drury Streets (now the location of Mamou) with a hatchet and take all the loot, valued at $30,000.
John A. Covington, described in the reports as a "negro porter", was a customer at the Kennedy & Bros store while this happened. He heroically ran out the door and pursued the men down Drury Street, yelling "Thief! Thief!" The hubbub attracted the attention of two nearby mounted policemen and a traffic cop. Eventually, the two robbers were being chased by the police, Covington, store clerks, messenger boys, wagon drivers and the street children that were hanging around at the time.
They ran down Juniper Street, shooting their guns at the crowd (missing each time) and one slunk into the Witherspoon Building while the other ran down Juniper. The angry mob ran into the Witherspoon Building after the one thief, forgetting the other, crowding through the hallways of the old building. Frank Tabasso, a 15-year-old messenger boy, found a case containing $5000 worth of jewelry obviously dropped by the thieves. He got swarmed by the crowd, which tried to take it from him, but held on tight.
The thief that ran into the Witherspoon Building got away through the Walnut Street side and blended into the street. The other, Nathan Heller, was arrested at 13th and Locust Streets in front of the Pennsylvania Historical Society. Ends up the two robbers were from NYC... apparently the "no snitchin'" rule was around back then too, because the other robber was never found.
As for young Mr. Tabasso, he returned the stolen jewelry to the Kennedy & Bros store and was commended for his honesty. Mr. Kennedy gave him a small reward and told him there would be more to come.

Posted by GroJLart at 8:17 AM 0 comments 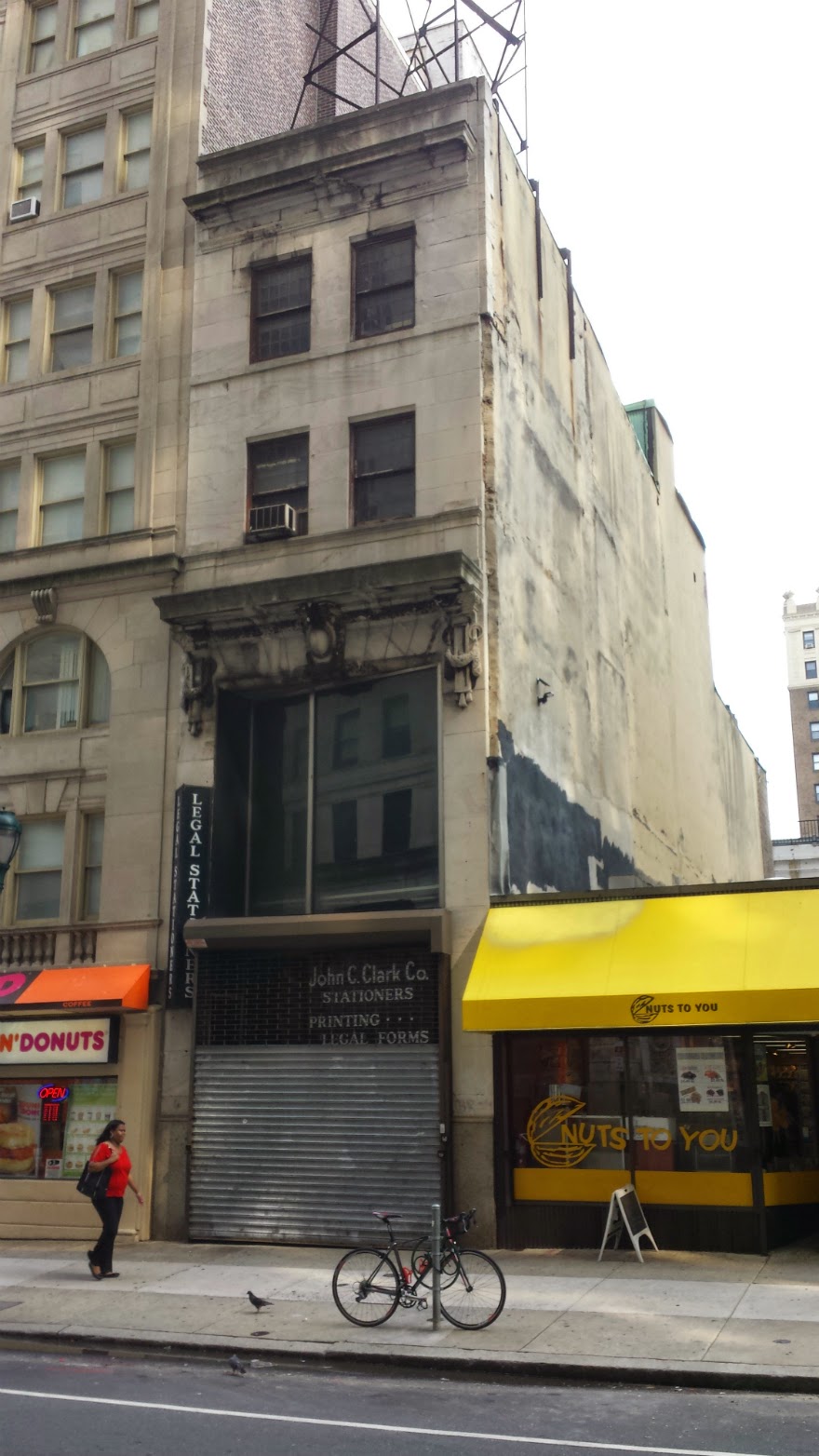 Empty for five fucking years with nary a "for lease" sign, "for sale" sign, or even an L + I violation notice! How they hell do you keep a building like this empty for five years without doing shit with it? C'mon!!! There's all kinds of stuff you can do with a building like this and in this location-- what the fuck is going on here?
This building was built in 1912 as the Kleem & Keen Investment Bank under the designs of one Richard Conover Loos. It continued on over the decades as other investment banks. Here it is as the Tremble & Company firm:

In 1951, the facade was made into its current configuration when the Colonial Federal Savings Bank moved in. They installed the billboard on top (of which the frame still stands) in 1952. 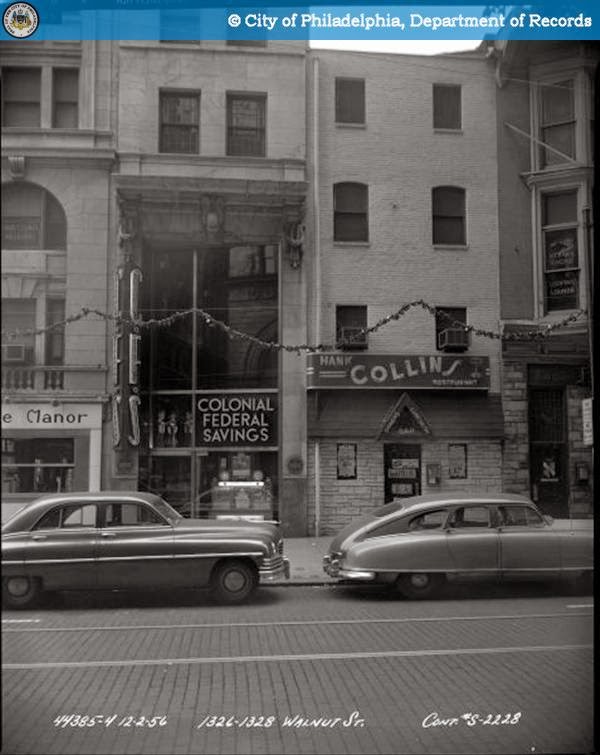 In 1977, the 160-year-old John C. Clark Legal Stationers, the oldest in the business, moved into the storefront and stayed for the next 3 decades. Then, out of nowhere, they disappeared. Their website it defunct and their phone number goes unanswered. No one knows what happened to them, except that the company won't be making it to its 200th anniversary in 2017.
Five years after they've gone, the building at 1326 Walnut has been sitting there vacant and unused, a 5,300 square foot pile of empty. This place is in a great location, served by a shitload of public transit options and close to offices, residences, AND hotels. Tons of foot traffic, the works. Do you want it? Well, its not for sale, for lease, for anything. What in the fuck is going on!?!? Somebody needs to investigate this shit and FILL THIS FRONT!
Posted by GroJLart at 7:56 AM 0 comments

Old-Ass Building of the Week: The Lofts at 1307 Sansom

I've always loved this skinny bastard-- learn all about it at the Hidden City Daily!

Posted by GroJLart at 9:56 AM 0 comments