Ugh, I've already fallen asleep. This pedestrian piece of horseshit manages to ugly-up a corner that already has two gigantic empty lots. Its just so damn boring. What's worse it is that the architect is unknown... it almost seems that nobody wants to own up to designing this crap.
This building was first conceived by Bishop Frank C. Cummings of the African Methodist Episcopal Church in 1980. He had just been on to eight banquets in the same week and noticed that he only saw one black dude working at them. He also noticed that most of the hotels and conference halls he went to were white-owned and run. Cummings thought that there should be a black-owned, black-managed office/conference/banquet/convention space that could help the community. After 9 years of planning and fundraising, his dream came true and the boring-ass building began construction in 1989.
It was named First District Plaza, being that Philadelphia is the home of the A.M.E.'s First District. The African Methodist Episcopal Church was born in Philadelphia through the Free African Society, formed when Richard Allen and Absalom Jones walked out of St. George's Methodist Episcopal Church (on 4th street next to the BFB) to protest the church's racial discrimination. Despite that history, the A.M.E.'s headquarters is now in Nashville, Tennessee. Funny, Supermegatect William Strickland went to Nashville too.
The building ended up costing $13 million. It was funded by bank loans, a federal block grant, and Self Help, Inc, an A.M.E. corporation. When it opened in April, 1990, people went fucking nuts over it. It was reported that a woman broke down in tears upon walking inside. Bishop Cummings called it the "Miracle of Market Street". Besides offices for the A.M.E. First District, it also boasted a shitload of banquet space, a cafe, and office spaces for various companies, both white- and black-managed.

So that all sounds great and I'm glad Bishop Cummings was successful in getting this all together, but why did they have to put it all in such a butt-fugly boring pile of shit building? I've seen suburban office parks that look more exciting. Because of this and the sleepy boxes that make up the University Science Center, the Western portion of business-based Market Street has to be one of the more boring stretches of road in the city... and that's if you're driving!!! Imagine having to walk all the way along those blocks! You'd pass out from lack of brain activity by the time you made it!
Now that the building has been up for 22 years, maybe its time for a change. What happened to cornices? Put a big-ass cornice on that thing, add like 5 floors, and clad it with some new facade. Then take out that stupid glass-block piece sticking out the front and replace it with a 80-foot statue of Richard Allen giving the finger towards Market Street so that everyone driving by gets the bird flipped at them. The First District of the A.M.E. represents a shitload of people. If each on contributed $5, all those alterations would be possible. Get to it!!

Posted by GroJLart at 6:45 AM 2 comments

Talk about a lost building... this one is VERY lost. So lost, in fact, that many sources don't know when it was built, when it went down, or if it ever existed in the first place. Well, your good pal GroJLart has the answer. That's right... for the first time ever, a complete history of the Philadelphia Skating Rink, known colloquially as the Mammoth Rink, will be revealed.
It all starts in 1863. That's when James M. Plimpton invented the modern four wheel roller skate. Skates existed 100 years before that, but they sucked. Plimpton's skates were easy to learn, making roller skating a fun pastime. As a result, the 1860's became the Age of the Skating Rink. The first opened in Newport, Rhode Island in 1866 and the craze hit the nation so hard that Philadelphia had five rinks open by 1868... but they were all thrown together quickly and were really small.
In that year, a truly official skating rink for Philadelphia was planned. It would be uncreatively named the Philadelphia Skating Rink. It would be 288' x 189' and have long single arched roof around 100 feet tall. The massive roof used a newly-patented waterproofing technology known as Outcalt's Plastic Joint Iron Roof. A gigantic mansard-roofed tower would stick out of the front, making the building one of the tallest west of Broad Street at the time. The cost was $80,000, 9.3 million in today's scrilla.
The rink was completed around the beginning of 1869 and made headlines when it opened. It was so fucking big that people didn't call it the Philadelphia Skating Rink, they called it the Mammoth Rink. Then, on April 29th of the same year, it burned the fuck down... a total loss. The motherfucker was under construction longer than it stood. The lot was replaced by a lumber yard for awhile before the rowhomes that stand there now were built around 1890. The rink never even made it on to any city maps and appears in only one city directory. This is why many historians researching it either doubt it ever existed or get it confused with the Addison Hutton-designed mega-sized skating rink that stood at 23rd and Chestnut.
It makes you wonder... if this Gigantor of Roller Skating Nutsacks had not burned down, would it still be standing today? What fate would have befell it? Similar rinks in other cities became everything from convention centers to field houses. What would have this become? It boggles the mind.
Posted by GroJLart at 6:38 AM 2 comments 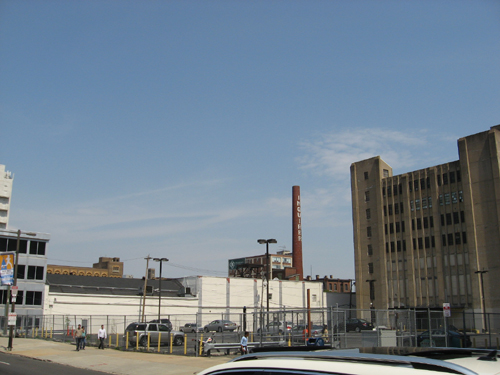 This lot is pathetic. It hasn't been able to be completely covered in construction for at least 60 years. What's worse, it may NEVER get built on. Its located at the Northeast corner of Broad and Noble Streets, but there's nothing Noble about it. This lot sucks ass.
Read more at the Philadelphia Citypaper Naked City blog!!
Posted by GroJLart at 6:41 AM 0 comments 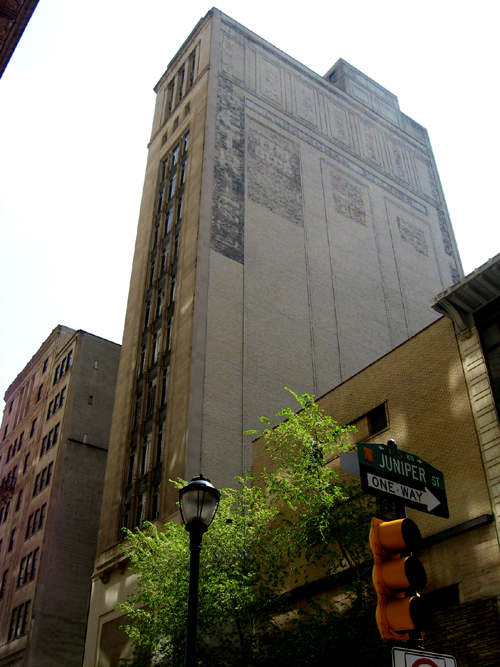 This is definitely not your typical building. 57,720 square feet of floor space packed into a 38' x 103' lot. Such a small footprint leaves you with a thin building that appears to touch the sky... despite being only 15 stories. The multiple world-record breaking tower inspires awe to those who discover it. A religious experience, if you will.
Read more later today at Hidden City Philadelphia!

Posted by GroJLart at 6:15 AM 0 comments