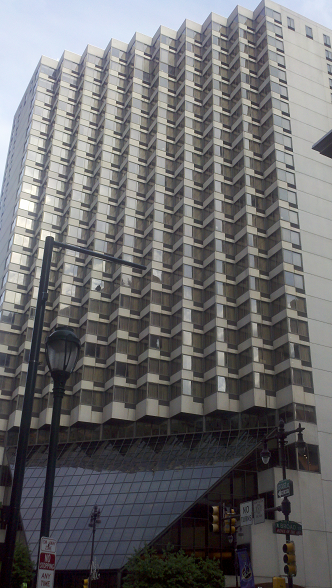 ﻿
The shitbirdious, overtly corrupt School District of Philadelphia ﻿had to have its start somewhere... and this is it. Though not the first HQ of the School District, this was the first buidling that was completely dedicated to it. Now the site of the local Federal Lock-up, this is a building that probably should have been preserved, but wasn't.
It all started in 1836. This is when the State Legislature passed the "Act to Consolidate and Amend the Several Acts Relative to a General System of Education by Common Schools", aka the School Law of 1836. This law allowed public schools throughout the state to open their doors to any (white) child, regardless of family wealth. At this point, the School District consisted of 26 primary small primary schools scattered throughout the city with a very limited enrollment. Now that schools were open to (almost) everyone, a shitload of new schools would need to be built.
In 1840, contracts to build the many schools required came out. One of these contracts was for a new school on Zane Street, just west of 7th. The school cost $20,952.20 to build, a fucking assload of money at the time. The Zane Street School opened its doors in April of 1841. People thought the school was cool because it had detached toiletS, that is to say, more than one.
The school was separated into two separate units, one for boys and one for girls. The first boy's principal was William G. E. Agnew, who would later have a school named after him in his own lifetime. The first principal in the girl's school was Lydia C. Smith. In 1848, the place changed its name to the Washington School, but gave that shit up by 1850. In 1858, when Zane Street was re-named Filbert, the school changed its name accordingly.
By 1868, the neighborhood's demographics shifted rapidly and enrollment dwindled so low that the now Filbert Street School closed, all remaining students moving over to the (also lost) Keystone School a few blocks away. By this point, the School District now had a Board which worked out of the Atheneaum Building on Washington Square.
In 1875, the school board wanted its own home from which to practice its corruption. They spent $5,842 converting the old Zane Street School into offices, creating the first official stand-alone home of the School District of Philadelphia. The building would continue this service for the next 24 years, until 1899, when the School District offices made a home at City Hall, which back then was designed for every last city office to move into.
The old Zane Street School would then become home to another city outfit, the Milk Pasteurization Station and/or Pure Milk Society. Back then, safe drinking milk was such a concern that cities across America had to set up stations like these to make sure people wouldn't die. From drinking fucking milk!!! On October 20th, 1911, the famous Lits Brothers bought the place for $38,000 and rented out the groundfloor as a storefront for $720 a year.
Shortly after that, the motherfucker was demolished. You'd think that the School District wouldn't let go of their first official HQ so easily, but back then nobody gave a shit about historical preservation. Even in an account from 1897, the building is noted as one of the oldest school buildings still standing in the city, and it was only 56 years old (that picture above is from the same time). Oh well. That's one lost-ass building.

Posted by GroJLart at 6:23 AM 0 comments

﻿
﻿                        So what's the big deal about this lot? Its behind some Chestnut Street buildings and across from a parking garage on Sansom... nice and hidden. So why is this a problem? Why shouldn't there be an empty lot here?
Found out at the Philadelphia Citypaper's Naked City Blog!
Posted by GroJLart at 8:54 AM 0 comments 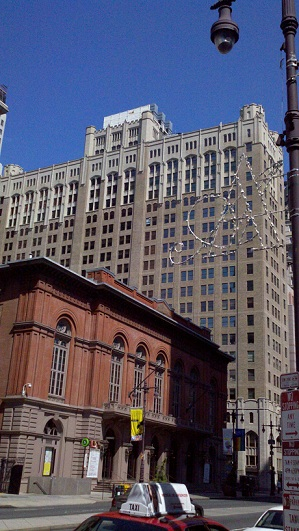 Now here's an inspiring building. Horace Trumbauer's Equitable Trust Building is unbelievable. You can't make up the story about this thing...this old bank building has been through a crazy life and is still kicking ass all over South Broad Street.
Read more at the Hidden City Daily!
Posted by GroJLart at 7:50 AM 1 comments