Fill This Front: Bridals by Danielle 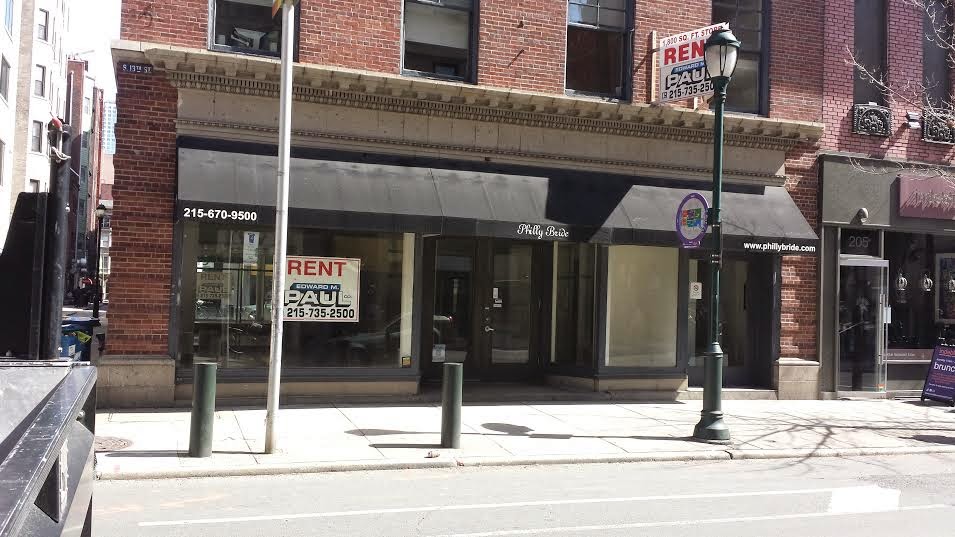 Ok, so its only been 1 year since this place has had an occupant-- but on 13th Street, other shit can't stay vacant for more than a months before someone else comes along (anyone know what's going on at the now papered-up Mamou?). The spot is not just on the 13th Street corridor across next to and across from some nice shit, its got 50 feet of street frontage, big ass windows on the front AND side, and is in a nice-looking building! What the fuck is wrong with this place? Why can't we Fill This Front!?! Well, from what I can tell, it might already be spoken-for.
First of all, what a nice-looking building. Its an old office building that was built on spec in about 1915-1916. It later became a Stenography School and then, during World War II, a dormitory for servicemen working at the Navy Yard and stuff. The ground floor wasn't a storefront until about 1958, when a jewelry store moved in and stuck around for a couple of decades.
In 1980, the place was vacant and looking like shit, just like the rest of 13th Street back then. The Redevelopment Authority took control of the place and had it renovated under the designs of architect William E. Cox, who would later become part owner of the place. The retail space became a laundromat and stayed that way after the building's current owner, the Daedalus Group Limited Partnership, took ownership in 1984.
In 1989, the laundromat peaced-out and Speedy Sign-a-Rama moved in. They left 4 years later and the space then became the Both Ways leather shop, which evolved into a bagel/coffee shop called Franny's Place, which was a well-regarded Gayborhood hang-out spot run by Fran Price, who currently is the executive director of Philly Pride.
In the 21st Century, the whole Tony Goldman renaissance of 13th Street was taking place and Bridals by Danielle moved in from around the corner, replacing a pharmacy that had briefly occupied the front after Franny's. In March 2014, they moved to 304 Walnut and the space has been empty ever since.

I get pissed off when such a nice-looking storefront in an awesome building has trouble getting filled... let me talk about it a little bit. This place is ~1,850 square feet with roughly 30-50 feet of storefront window out front and a whole bunch of other windows along the Chancellor Street side (ok, so they face a bunch of dumpsters). Its right in the midst of kick-ass Midtown Village 13th Streetness, right where lots of positive changes are finally coming to fruition. You have Green Eggs, Host, a new building under construction at the old Dewey's site, a hair salon that's been on the block for like 20 years, Woody's, and and even the kick-ass awesome Franky Bradley's further down the Chancellor Street. On its own block, it has Indeblue right next door, Bellevue Nails, 13th street Pizza, and the new Cappelli Brother Cigar Company which was packed as shit when I walked by it last Thursday night. THAT'S WITHIN ON FUCKING HALF BLOCK, I don't even have to mention the rest of the stuff that's even one block further. The area gets motherfucking assloads of foot traffic, has tons of residents and daytime workers nearby, and is accessible by multiple modes of public transport, including the Broad Street Line, Market Frankford Line, AND the goddamn PATCO!!!
Sounds great, right!?!? Well, guess what? The listing for the space (which still calls this area B3 like its 2005), says "Off Market" and was last updated on July 4th, 2014. So is it even fucking available? The guy who's name it is on the RENT sign could not be reached for comment. If not, who picked it up? There aren't any permits in for alterations or anything like that, so is someone just paying the rent and sitting on it?
Well, whoever you are, get your shit together and open something up here. Its about time we FILL THIS FRONT!!

Parking Garage of the Week-- Avenue of the Arts Garage 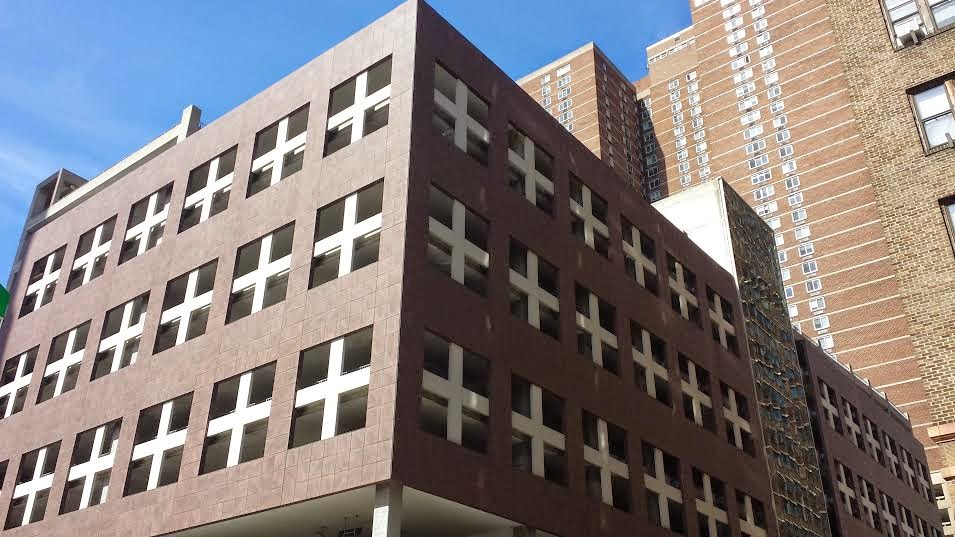 I'm coming back to doing Parking Garage of the Week just for this bitch-bastard of a behemoth right here. This juggernaut of automobile storage isn't the ugliest garage in town but as it ages, its just going to look more and more like trash. What's worse, its called Avenue of the Arts Garage even though its on 15th street!
It sort of started in 1986 when Parkway Corp bought up an old surface parking lot and cleared even more cool old buildings until it stretched all the way to Latimer Street. Even back then, there were talks of a large public building replacing the shitty lots and buildings at the southwest corner of Broad and Spruce.. some said it would be a new Convention Center, others said it would be a the Regional Performing Arts Center that was promised as far back as 1963.

In 1999, the Arts Center was the one that finally got built there, and while it was under construction, people started to crow about how this great new place was going to need some supplementary parking, even though an underground garage was planned for it (that underground garage is managed by Parkway). It was estimated that an additional 500-spacer would be needed to accommodate all these new visitors that were supposedly coming.

Parkway was ready to roll. In the middle of the year 2000, they proposed a 668-space parking garage with roughly 15,000 to 16,000 square feet of ground floor retail space. The design was by Bower Lewis Thrower, whose work of the period was pretty crappy (I think their new design for East Market is pretty good, so maybe they're getting better).  The working name of the garage was going to be the Shops at Fifteenth and Spruce, kind of like the Shops at Liberty Place.
After making adjustments for the ZBA and the CCRA, and getting some government cheese with Tax Increment Financing, construction began with a target opening date of January 2002. The place had no problem securing retail tenants... Buca di Beppo signed on for a five year, $31,875/month lease while the thing was still under construction. Fox & Hound and Starbucks were about ready to come in right when the big-ass garage opened.
13 years later, the Kimmel Center isn't quite the draw people thought it was going to be, but this garage seems to nonetheless be doing shitloads of business. The Buca di Beppo announced that they would close after their lease was up in 2007 but ended up renewing and sticking around until 2012. They've since been replaced by the Philadelphia location of Howl at the Moon, a Chicago-based piano bar chain that finally came here after opening 15 locations in lesser cities.
The other two original tenants are still going strong. Fox & Hound is still the notorious bro bar that its been for many years and the Starbucks is yet another Starbucks that proves that these places stay open even when there's another location 1-2 blocks away in every direction.
Ok, so this isn't the worst parking garage I've ever encountered-- it keeps its storefronts filled, it actually has a facade, the glass elevator shaft is kind of cool... but that doesn't mean this is a good thing... the surface lot that was here could have easily supported a real building instead... or better yet, an underground garage. I don't know what kind of structure this thing really has but it would be nice if some kind of tower could be built on top one day-- it would sure make up for fucking up this corner for so long. Oh well, we're going to be stuck with this motherfucker long after other older garages vanish. Guess we should just get used to it. 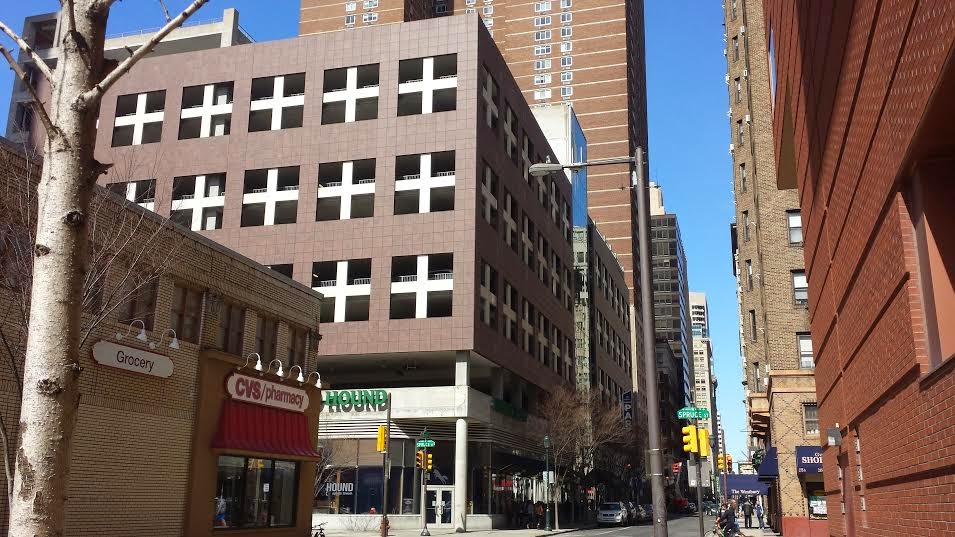 Posted by GroJLart at 7:27 AM 2 comments