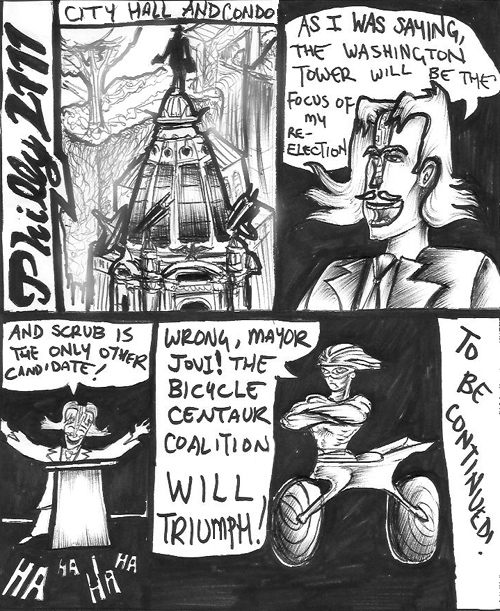 Posted by GroJLart at 7:01 AM 0 comments

From the Corner of N. 9th and Filbert going north through the middle of the 800 blocks of Arch, Cherry, Race, and Vine Streets.


This is one gigantic motherfucker of a lot. It spans entire blocks and continues across the street. It's the Center City Commuter Connection Tunnel Mega-lot. Many modern Philadelphians know very little about the Centery City Commuter Connection even though it was in the center of Philly politics and redevelopment from the 1950's to the 1980's.
Long story short: Badass Motherfucker Pro Tempore Richardson Dilworth, whose mayoral administration effects every Philadelphian living today, was sick and tired of having to use two different train lines from one side of the city to the other. His ho's were especially angry. He proposed a train tunnel that would connect the two underground. The city said "fuck you" because it would cost too much money. The train companies said "fuck you" because they hated each other and didn't have trains capable of traveling through the tunnel. The Federal Government said "fuck you" about trying to help fund it. Dilworth and the mayors that succeeded him were fucked....
Until the Five-Star Admiral of Badass Motherfuckers came along... Mayor Frank Rizzo. He said "eat shit" to every other kind of transit improvement and convinced the Federal Government and the state to throw funding at the project by giving everyone involved one gigantic collective headlock. Construction was an ongoing mess of blocked traffic and pissed off pedestrians for six years.
Extreme care was taken when constructing the tunnel under the Masonic Temple, City Hall Annex, Reading Terminal, and Strawbridges' Building. The Aramark Tower and shitty-ass Gallery were under construction at the time so constructing the tunnel through them was easy. Then it needed to turn north to connect to the track the Reading Viaduct used to come from. After all that effort to buttress under those buildings, the construction got to Chinatown and they just said, "Forget it, Jake. It's Chinatown. Mow it all down motherfucker!", and they did. The result was a 4 block long hole that later got covered with surface lots. Check the picture above. The buildings outline the path of the CCCC.
Fast Forward 27 years. Twenty-seven goddamn years and you still have an empty lot that extends for blocks. I used to think that no buildings were built over the CCCC due to noise, weight, and vibration concerns... until I found out that the deepest part of the track is in that area AND that the track was designed to be sound and vibration proof... SO WHAT FUCKIN' EXCUSE DO WE HAVE? There should be 20 buildings in the regions that this lot extends! That ugly-ass Pearl Condo box was built as an attempt to slightly un-fucktify this mega-lot but there needs to be more. This makes me soooo angry. FUUUUUUUUUUUUUUUUUUUUUUUUUuuuuuuuuuuuuuuuuuuuuuuuuuuuuuuuuuuuuuu......

Posted by GroJLart at 7:17 AM 6 comments

Lost Building of the Week-- April 27

The Hotel Walton (aka the John Bartram Hotel)


Wow, this one happens to depress me quite a bit. The Hotel Walton was a Megacastle of Conical Towers designed by Angus Wade, who I assume must have had a dick 12 feet long. This badass bitch opened in 1896 and rocked Broad Street until about 1946 when having cool-ass motherfucking hotels must have went out of style or something. It reopened as the John Bartram, and just like anything named after Bartram, had extremely bad luck. If you don’t know what I’m talking about, look up the school and housing project named after the same man.
Look at this sexy motherfucker. I love conical towers and I’m pretty sure this building touted the biggest one the city’s ever had. The Walton was a city landmark for pretty much the entire first half of the 20th Century. Dudes were always writing home about getting laid there. The place was so nice inside they even made postcards of the LOBBY.
They tore the motherfucker down in 1966 to make way for… nothing. The spot was the Empty Lot of the Week every week until 1983 when a future Butt-Fugly Building of the Week, the Doubletree, then known as the Hershey Hotel, was built. In classic Empty Lot of the Week style, the empty space had MANY hopeless proposals come through, most notably this one from 1969:
Why don't we do conical towers anymore? I know they're hard to maintain but daaaamn, they make for some sexy buildings. On top of that, the Hotel Walton shows how you can add asymmetrical uneven windows on a building without it looking like a barcode... take notes crappy modern architects. I love this Cathedral of Cock-Slapping so much that I drew my own rendering of what the building would look like now if it had been saved and restored:


This would be such a great building if it was still around today. You'd be drinking a nine dollar PBR at its bar right now. What a fucking bummer.
Posted by GroJLart at 7:17 AM 3 comments

Holy shit you need to watch this!!!

I know I'm only giving an hour notice here but this awesome show, Philadelphia: The Great Experiment is about to air tonight at 7:30 on Channel 6 (ABC). The hopeless mayoral candidate Sam Katz is somehow involved in the making of this and it's hosted by that Walking Pillar of Silver Jim Gardiner. Trailer below.


Learn more at the creator's website, History of Philly
Posted by GroJLart at 6:35 PM 0 comments

Butt-Fugly Building of the Week-- April 26

Sporting Club at the Bellevue


I hate buildings that prove NIMBYs right. In the early 1980's South Broad Street looked like shit... sort of the way North Broad looks now. The beautiful buildings constructed in the late 19th and early 20th Centuries were caked in layers of coal and car pollution. The old Ritz Hotel (a future Old Ass Building of the Week) was missing it's skydeck and had a 1940's facade of lines covering it's formerly beautiful bottom quarter. The Bellevue-Stratford had pieces falling off of it and was about to fall over... it was tired from just giving birth to Legionnaire's Disease. The sidewalks and streets were cracked up as shit. Ever notice that it's hard to find a picture of Broad Street in the late 70's early 80's?
Some big-balled motherfuckers named Richard I Rubin & Co. came along and decided to improve the 200 block of South Broad Street. They restored the Bellevue-Stratford and needed to add amenities to it. They looked to the left of the old hotel castle and saw a lot that had been the Empty Lot of the Week for more than five years. Oh yeah, and that lot once held this:
Then they said, "Wow! An Empty Lot on South Broad Street! Think of the possibilities...", then just said "Fuck it, lets build a parking garage." Build one they did. In 1983 they built a parking garage to match it's uglier big brother across the street (I'll get to that one another time). A few years later, The Sporting Club at the Bellevue was built on top of that garage, designed by Michael Graves.
Look at that pile of donkeyshit. It's like someone took a parking garage and a Lego set and just went bananas. You almost want to thank the facade for teaching you about geometric shapes. Circles and Squares and Rectangles and Triangles. It was like Michael Graves gave the blueprint to his 4-year-old and said "Hey, finish this bullshit for me... I need a facade for this thing. Use some of the shapes you learned last week at nursery school you dirty bastard!"
A book called Philadelphia Off the Beaten Path: A Guide to Unique Places By Karen Ivory calls this giant statue of an 80's movie robot "most noted for its design". She should have said "It sees through the three circles and talks through the giant triangle!" What a pile of crud.

Posted by GroJLart at 7:01 AM 5 comments

Old-Ass Building of the Week-- April 25

Literally in the shadows of the Comcast Center, the Robert Morris Hotel still stands as a big "fuck you" to all the new buildings surrounding it. Built in 1914 and expanded in 1921, this Barrio of Ball-Piercing has been almost totally forgotten. It often gets confused with the Robert Morris Building on the 900 block of Walnut and the Morris House Hotel near Washington Square. Jeez, pick a new person to name shit after.
This building proves that you can make an awesome facade full of architectural ceramic details on what is essentially a box with a little conjoined twin sticking out of the side. Back in the day when this Tower of Terra Cotta Ticklers was built, most of the cost of the buildings was in the materials, not the labor. This was primarily because you could pay a highly skilled worker like 2 cents a week and your building would still come out awesome and stand for 97 years and counting. Nowadays, you actually have to pay your workers a decent wage and they are a lot less skilled. This forces today's architects to come out with all those ugly facades with colored boxes everywhere plus those fucking asymmetrical uneven windows that will cause future Philaphiles to laugh at our time period.
The Robert Morris Hotel started as a 6-storey office building for the Methodist Church. After 8 more floors were thrown on, the building became the city's "newest and coolest hotel" (don't look at me, that's what it said on their postcards). It then quickly became a crappy boarding house a la the Parker Spruce. In 1986, the Building was converted to Class ZZZZZZ offices and stood more or less forgotten... until a 985 foot glass box called the Comcast Center was built across the street and people started to notice it again.
In late 2007, San Fransisco-based Kimpton Hotels saw the facade of the building and said, "Hell motherfucking yeah!! Let's make some dough!" and planned on doing a total renovation into a four-star hotel that they were probably gonna call "Pissadiarreah" or something along those lines. Then at some point they said, "Fuck it, let's just stick to the Palomar. The Pissadiarreah is too good for these Philadelphian savages." and then peaced the fuck out.
There are rumblings out there now that this awesome Monolith of Male Growth Hormone is to be converted into apartments or condos. Let's see how fast this plan falls through. This is Philadelphia.

Posted by GroJLart at 8:48 AM 3 comments