You know a building is a piece of trash when the people it was built for give up on it in less than 20 years. That's what happened to this craptonious pile of puke at the NW Corner of 17th and Sansom Streets. This rectangular box of concrete condom wrappers is a goddamn embarrassment that never should have happened. When you see a concrete box, the most likely thing to pop into your head is "goddamn 1960's!!". This building exemplifies 1960's fuckitecture like no other.
The conception of this building started in the 1950's. The Philadelphia Stock Exchange was in such dire straits that it moved out of its building at 1411 Walnut Street because the rent in the building next door (the Manufacturer's Club) was cheaper. That's pretty fucked up. They moved next door to the building that still has their name on it. FUCKED UP. Business was so slow that the traders on the floor were literally making more money playing backgammon with each other than trading stocks.

In 1957, things started to look up. The Stock Exchange convinced the Pennsylvania State Legislature to remove the transfer taxes on stock trades from outside the Commonwealth. Business grew at leaps and bounds. Removals on similar taxes for international trades boosted it as well. By the beginning of the 1960's, the Stock Exchange was ready to move out of their 9th floor condo at the Manufacturer's Club and move into a fucking building with their name on it.
Instead of the cool-ass old building that already had its name sculpted on it in motherfucking stone, they chose to move into a new, modern building that would show off how high tech the Exchange would become. The recently-built jumble of glass-and-concrete rectangles known as Penn Center were a big hit, and the Central Business District of the city was successfully moving West.

Meanwhile, Provident Bank, no strangers to taking risks with buildings, started plans on a new and modern office building that would be built at 17th and Sansom, close to Penn Center. It was a knock-off Penn Centerish-looking building that was also designed by the same Grandmaster of Shitbag Boxitecture, Vincent Kling. The Stock Exchange liked the idea so much that they wanted in, along with naming rights. They even got the city to rename Ionic Street "Stock Exchange Place".

The ugly motherfucker got built in 1965 and the Stock Exchange was moved in on May 2nd, 1966. They signed a 15-year lease and decked it out with all kinds of high-tech shit, like copy machines! The lease was signed with the proviso that they could move out if that transfer tax shit started again. In 1969, they got that opportunity. The city this time, not the state, started their own transfer tax, and the Stock Exchange said, "Fuck this shit!!" and moved to an even uglier building in Bala Cynwyd. The tax was repealed a month later and the Exchange moved back in.
As their 15 year lease was coming to a close, the Philadelphia Stock Exchange had grown and merged and associated itself all over the place. It was ready to get out of that shitbird of a building and build a goddamn skyscraper at 18th and Market. The NIMBYs at the William Penn House next door squashed the idea down to a crappy 8-storey building that's cool on the inside but looks like assinthrope from the outside. The Philadelphia Stock Exchange moved out of 17th and Sansom in 1981.
The building stood as crappy ZZZZ-level offices for almost 2 decades. In 1998, the city tried to bolster some shit up in the neighborhood by naming the area "the French Quarter". The French theme attracted attention from the French company Accor, who announced that they purchased the old Stock Exchange building and would be turning a luxury hotel under their Sofitel brand. They would get New York architects Brennan Beer Gorman to un-Klingify the tower and make it a little less Butt-Fugly.

They failed. After an $80 million renovation, the Sofitel opened in 2000. They put an addition on the back of the building that looks like my nutsack. It really does look as boring as ever. Only 12 years later, the concrete is getting all browned up and tarnished again. What a crappy building.

Posted by GroJLart at 6:35 AM 4 comments

Was this building named by a Klingon? This cool-ass building was built as part of the 1100 Super-block of Market Street in the early 20th Century. While cool as shit when it was built, the building fell into obscurity and stood as a ruin into the 1970's.
In the early 20th Century, the 1100 block of Market Street was the SHIT. The South side had the super-massive Snellenburg's Department Store and the North side had the Reading Terminal Market, Philadelphia Inquirer Building, Market Street National Bank, and this, The Denckla Building.

The weird-ass name Denckla Building most likely comes from the Denckla family, one of Philadelphia's old families that never got rich enough to be considered for the list of "Old Philadelphians". The family came to the primordial city/village of Philadelphia in the 1700's, kicking trustafarian asses until they pushed their way into being associates, but not really members, of Philadelphia High Society a century later. Descendents of the Dencklas live on to this day, probably having no clue that a building bearing their name stood at a prominent corner in Philadelphia for seven decades.
This Masterpiece of Market Street Cornering was designed by the Postmaster General of Specialized Badasses, John Torrey Windrim, and was built in 1906... it was the final piece of the puzzle needed to complete the Superblock. The offices of such famous Philadelphians as bankergineerchitect Otto C. Wolf and famous theater architect John D. Allen were located there, along with the downtown offices of the Crane Company.
In the mid-20th Century, Market East went to absolute shit, sort of like it is now. The cool-ass buildings on the Superblock got altered beyond recognition and fell into dirtiness and disrepair.

At this point, the Denckla Building was still in use but looking like shit.

The Denckla Building lasted up into the 1970's, when it was unceremoniously ripped down when Market East Station and the CCCC Tunnel were being built. You can see the hole that was the result in this scene from the 1981 movie Blow Out:

After Market East Station and the CCCC Tunnel were complete, the corner stood as an empty lot until the federally-funded pork project known as One Reading Center was built in its place in 1984. Nowadays, we call it the Aramark Tower-- not a bad-looking building considering the year.
One day, if and when Market East and the Girard Estate block gets its fucking act together, the Superblock may one day rise again. The North side is most of the way there but the South side is a horrendous pile of crap. They should have just left the buildings that were there the fuck alone. Fuckers.
Posted by GroJLart at 6:41 AM 0 comments

Bounded by Arch, Appletree, 8th Street and the African American Museum of Philadelphia


What a crappy lot.  Not only is this ocean of asphalt in an unfortunate location, its also surrounded by a multitude of ugly buildings. This lot is part of the barrier between Chinatown and the Historic District. When you stand on the block where this pile of tarmac sits, you can't even tell that Chinatown is only a block away.
Read more on the Philadelphia City Paper's Naked City Blog!
Posted by GroJLart at 7:56 AM 1 comments 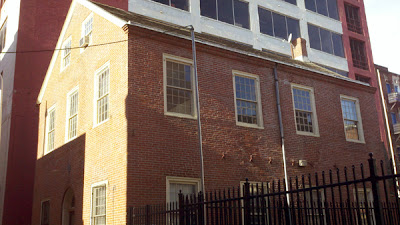 This little building, tucked away in a forgotten corner of Center City that I call Season City, is one of the last surviving Black Schoolhouses in America. It has survived development after re-development, street name change after street name change, of all its surroundings. It is a true ruin from Philadelphia's ancient past and America's cultural heritage.
Read the rest on Hidden City Philadelphia!!
Posted by GroJLart at 8:16 AM 0 comments