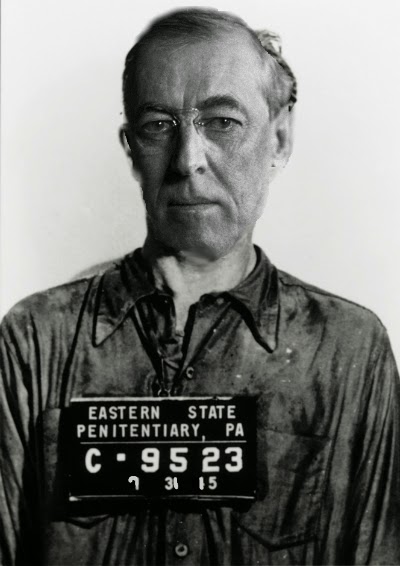 If you look exactly like the current president, don't expect to be able to travel the country unnoticed, especially if you plan on being on the run. At the end of July, 1915, James K. Lewis was tracked down in Philadelphia after 11 months on the lam. This Mount Holly, NJ resident abandoned his family after selling his carpentry business. It all would have worked if the guy didn't look exactly like the current president, Woodrow Wilson.
Upon being spotted in San Francisco, Lewis, traveling under the name James Landis, started moving eastward, going from place to place until people noticed his resemblance to Wilson, forcing him to move on. His capture came at the hands of Detectives Knox and Lowry of the Philadelphia Police, who spotted Woodrow Wilson at 3rd and Cumberland Streets and remembered that a Wilson double was wanted in Jersey. They arrested him and locked him up at City Hall, where he was later extradited to Mount Holly, where he was accused of "non-support" of his children.

A Spy in Kensington?

At the end of July, 1915, rumor had it that there was some kind of spy operating in Kensington, of all places. Some thought he was a German spy, others thought he was British. Some other folks thought he might actually be a Mexican. The cops in Kenzo were instructed to keep their gossip to a minimum and be on the look-out for a dude taking photographs.
A policeman McDougall eventually spotted the suspect and followed him around for a day. Because he was mostly photographing trolleys, McDougall assumed he must be a spy for the private "jitney" companies, aka bus companies. In 1915, there was a cold war going on between the Philadelphia Rapid Transit Company, operator of the city's trolleys, and the many private bus companies that started operating around this time, taking all their customers. Once McDougall saw the spy photographing large buildings, he started to think that this Jitney Spy was figuring out where to engage new bus lines and which buildings could be converted to garages.
Upon concluding this, McDougall arrested the suspect, who would not give his name but would curse out the cop in Russian the whole way to the police station. When brought before Magistrate Scott, he was ordered to open his camera case. It was filled with liquor. The suspect then gave his name as George Adolphus Scott and said that he found the camera in a park and was photographing trolleys and buildings hoping to sell the photos to tourists and/or postcard companies.
Magistrate Scott released him on the condition that he would photograph areas outside of Kensington.

The Tenderloin: Rife With Cocaine and Silk Shirts

Philadelphia's notorious Tenderloin district, which extended fully from 13th to 6th between Race and Callowhill (but was mostly centered around 800-1100 blocks of Vine), had two big things going on at the end of July, 1915: cocaine and silk shirts.
The Cocaine was being processed and distributed from 235 North Watts Street (now a crappy Season City SLE-Z parking lot), at the home of one Harry Reynolds, known as the "Cincinnati Kid". When cops raided the place this week in 1915, they found a veritable cocaine factory and were able to trace it to drug dealers operating neighborhoods away, one way out at 51st and Market. Dr. J.G. Lumen, a Chinese doctor working in Chinatown, reported to police that many of his patients were coming in complaining of their addiction to the drug and worried that they would lose their sanity if not satiated.

The silk shirt problem in the Tenderloin started getting noticed around this time in 1915 by a Detective LaStrange, who started to realize that every man he arrested or even spoke to in the Tenderloin was wearing the same loud silk shirt. Further investigation showed that the William G. Becker store at 1018 Chestnut had been robbed of hundreds of silk shirts twice in the previous two weeks.
After some good old fashioned police work, LaStrange was able to determine that a group of miscreants from a rooming house at 918 Winter Street were the ones stealing the shirts, and that a Harry Davis was distributing them from his place at 831 Vine Street. LaStrange gathered up some other detectives and many arrests followed A few weeks later, the robber's stories of hardship came out. Some claimed to have turned to a life a robbery as a result of having to support their families, others said they moved into the Tenderloin without knowing about its criminal element and got swindled into joining it.
No one bought their bullshit and each got charged with not only the two robberies of the Becker store, but also of the robbery of the Evans' drug store, which they did in between.

On July 31st, 1915, one James Drikins was walking his 1-year-old baby in a stroller down the 2300 block of South Mildred Street. When he passed 2313 South Mildred, he accidentally bumped into its owner, Harry Wolfson. Wolfson, apparently infuriated by the event, kicked the stroller so hard it went flying into the street. Though the baby was un-injured, an angry mob formed around the scene. Wolfson was able to escape into his house and a Policeman Levering followed him inside to question him. Big mistake!
Upon entering the house, Wolfson's wife, Yetta, held down the cop while Harry beat the shit out of him with a stone pitcher. Upon seeing Levering crawl out of the house with a huge gash on his head, the angry mob rushed the Wolfson house and beat Harry's balls off until two officers came along and apprehended him. Levering got stitched up at Methodist Hospital and the Wolfsons got held on $1000 bail each.

Posted by GroJLart at 8:57 AM 2 comments 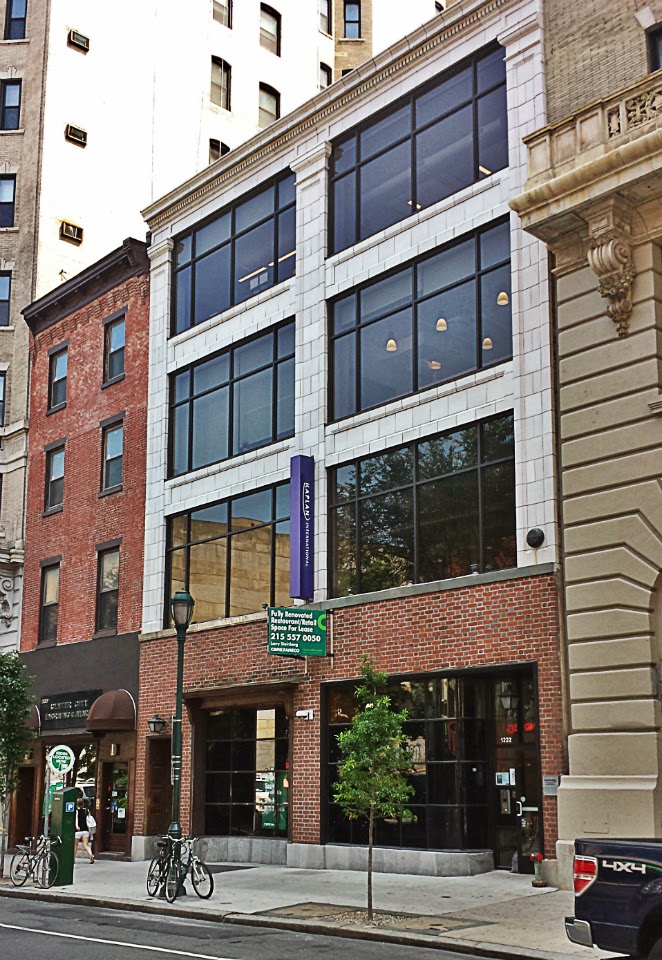 This is the +/- 4000 square foot retail space at 1222-24 Walnut Street. It has a huge fancy-looking front window with about 34 feet of frontage on a busy-ass section of Walnut Street in Midtown Village/the Gayborhood, part of Greater Washington Square West. The ceiling height is tall as shit and the floor space extends back about 104 feet, meaning you could fit just about anything in here. It has a rear access from St. James Street. The space is close to nearly every form of public transportation in the City of Philadelphia: a few blocks from both subways, 5 trolley lines, every regional rail via Market East Station, and a whole shitload of SEPTA and New Jersey Transit bus lines, including the 23 bus, the most heavily used bus line in the whole system.
Being that the previous occupant was able to make this space work for 60 consecutive years, its pretty safe to say that this retail space has some staying power... and they did it when there was no such thing as Midtown Village or even the Gayborhood! There aren't many other floorplates this size in the neighborhood, so this is really the only place around here that you can fit a more larger format-type place. The space is being offered for lease by CBRE|FAMECO and the price is "negotiable". Here's the listing. Don't wait! FILL THIS FRONT!!
Posted by GroJLart at 8:35 AM 0 comments

Check out this old bastard at Broad & Chew, way the fuck up at the top of North Philly. Its abandoned now but you can buy it for the low low price of $549k. Read all about it at the Hidden City Daily!
Posted by GroJLart at 12:22 PM 1 comments