Ya know, I try to avoid talking shit about UPenn's, Drexel's, and Temple's Butt-Fugly buildings. People just sort of expect 20th Century college architecture to look like shit. Back when I did those articles about Myerson Hall and the Annenberg Center for the Performing Arts, some folks came at me saying it wasn't fair to come down on collegiate buildings because they're SUPPOSED TO suck. Trust me, I understand. I did my undergraduate work at the one of the world's ugliest campuses.
Nonetheless, fuck this building. This dirty piece of concrete dogmeat looks worse than the railyard it replaced. Though I like that it has an entrance on the level of the Walnut Street Bridge, they couldn't have made a worse design for it.. blech. The origin of this thing is pretty well known. It started in 1968 when a bunch of rich-ass alumni from the Penn class of 1923 came together into a group called the Friends of Pennsylvania Hockey. They scrounged up 3.2 million dollars in order to build a new hockey facility on the UPenn campus. Back then, Penn's hockey team was a big fucking deal.
Over 3 million of the 3.2 million came from one donor, Class of 23er Howard Butcher. The donation was the largest ever in Penn history at the time. Eventually the NYC-based architecture firm of Robert S. McMillan Associates, who usually design stuff for Africa and the Middle East, were commissioned to design the new 2,900 seat rink. Once built in 1970, people went nuts over it. Hockey games in the arena were always nearly sold out.

The design was sunk next to the Walnut Street Bridge and looks like the fucking Jetson's house. The entire structure is poured concrete on concrete. 42 years later, it looks like butt, just as you would expect any piece of concrete that old to look. For the longest time, it was the first piece of UPenn property that would be seen when coming over from Center City. How embarassing.
In 1978, Penn pulled the plug on Ice Hockey due to budget problems. Ever since, the arena has hosted high school hockey, figure skating shows, trade shows, and other crap. Despite being extremely outdated and ugly, the shitpile is still the largest collegiate arena in Pennsylvania. Pitiful. I'm not the only one who thinks this thing should be gone. Penn knows how fucked up this place is.
In 2005-2007, Penn's Master Plan had the Class of 23 demolished in favor of a more intensive use building. Though the demolition wasn't set to take place until 2020 and though Penn guaranteed a replacement rink, NIMBYs came out to protest it. The crowd at the initial planning meeting roared and the Delaware Valley Collegiate Hockey Conference put out a petition to stop it. Why the fuck are they trying to save this thing? It looks like its about to crumble into dust!
I could swear I've seen a more detailed rendering of a building that replaces the rink, but I can't find it anywhere. The current Master Plan replaces the shitbird Ice house as well, but has it in the 2025-2030 range. Though NIMBYs will probably still come out against demolishing this motherfucker by that time, I doubt there will be much left of the arena by then. Just go take a look at it. The tarnished up building looks like it will disintegrate if you went up and gave it a good kick. Fuck it.

UPDATE: Found the renders of the Athletic Complex once proposed to replace the shitrink: 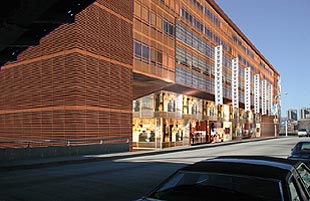 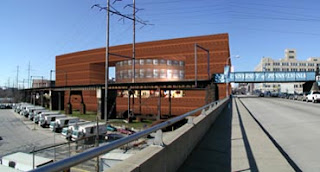 Posted by GroJLart at 8:31 AM 3 comments

We take the University of Pennsylvania campus for granted today, but we all have to remember that its expansion wiped out most of the old West Philadelphia, which was essentially a city upon itself. This right here is just one of the many treasures from West Philly's glory days that is now part of the campus.
This building comes from the early age of apartment highrises. Prototypes such as the St. James and the Gladstone in Center City were built on speculation in order to house the aimless trustafarian sons of Gilded Age Money-Royalty. West Philadelphia, home to some rich-ass motherfuckers at the time, had need for this type of residence as well.
Mega-developer Adolph Segal was on the case. In 1893, he took a weirdly-shaped trapezoidal lot that fell between the 3300 blocks of Chestnut and Woodland Avenue and had an 8 storey apartment building designed by William H. Free fill the entire space. The oddly-shaped space makes for a building that seems thin when seen from the east and wide when seen from the west. They called it the Bartram Apartment House.
Like the other apartment houses of this type, it didn't stay a luxurious residential building for very long. Only about a decade after being built, the building started to be used as an extended-stay hotel. Eventually, it was converted into a full-on luxury motherfucker with designs from the Magaziner and Eberhard firm.

Among the alterations was a big ass sign that said "Hotel Bartram" just like the one on the Divine Lorraine.

For the short time that it was a luxury hotel, the building hosted conventions/banquets and put up special guests of the University of Pennsylvania. By the 1940's, a small hotel chain called Milner Hotel came along, opening at least two locations in Philadelphia. One was near 10th and Chestnut and the other was here, at the old Bartram. The building was in pretty sorry shape by this point... a 1945 fire charred up the facade and made the building lose that cool-ass cupola at the top.
By the end of the 1950's, UPenn was coming a-knockin'. They wanted to build Hill College House and an associated complex of buildings. This would require demolition of everything between 33rd, 34th, Walnut and Chestnut Streets. The destruction would include the old Bartram and the entire 3300 block of Woodland Avenue. Here's a link to what the building was looking like right before demolition. Its all the way to the right of the picture. A ceremony dedicating the destruction was held on February 5th, 1958.
By the time the 60's started, the Hill College House was built but rest of the complex(complete with a surface lot!) would never come to fruition. The site became a huge patch of weeds and dirt. Penn put a surface parking lot up at one side in the mid-60's, then a small building on top of that parking lot a little later. By the time the 21st Century came along, that shitty empty area was finally turned into an extension of Woodland Walk. Its become a nice green space that leads you into the campus and serves as an Einstein-Rosen Bridge spanning between Drexel and Penn.
Finally, 5+ decades after the building's demolition, Hill College House's complex is (in a way) planned to come into fruition. Hill Square is part of Penn's latest Master Plan.

Maybe, just maybe, when they dig up the ground to make way for this shit, the ol' Bartram will rise from the grave and bring its presence back to Chestnut Street. It would then stand to remind people about the lost city of West Philadelphia.
Posted by GroJLart at 8:19 AM 4 comments 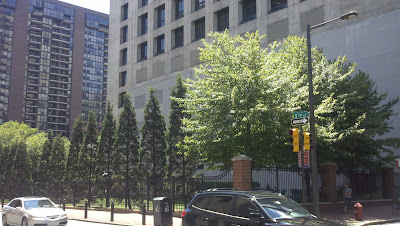 This lot has it all. The site of multiple cool-ass historic buildings and Dead-Ass Proposals. It even has a surviving Toynbee tile nearby! The real wonder is why the fuck this space is still full of grass. This month marks this piece of dung's 20th anniversary of being an Empty-ass Lot. That's some sad-ass shit.
Read more at the Philadelphia Citypaper's Naked City Blog!
Posted by GroJLart at 9:18 AM 0 comments

We're back!!! The newest building I have for ya is old as fuck. This simple little building might seem unassuming, but don't let its sparse look fool you. Its 157 years old... one of the first buildings ever built in the Logan Square neighborhood.
Read more at the Hidden City Daily!!