On the final day of May in 1916, the Honorary Commercial Commission of the Republic of China stopped in Philadelphia while on tour in the U.S. Were they here to see our kick-ass manufacturing? No, though they did tour some factories. Skyscrapers? Nope, they didn't even come to City Hall. They were really here to see our fantastic marvel of the world, co-educational schools.
Philadelphia definitely didn't invent co-ed but for some reason, the 21 rich-ass Chinese dudes who were touring America chose our fine city as the place to check it out. Chieng-Hsun Chang, the "Chinese Merchant-Prince" who led the Commission, couldn't get enough of it. He stated "婦女在美國被賦予與男子平等的機會接受教育的方式是美好的" which roughly translates to "Women and men in the United States are given equal access to education is a better way". Chieng-Hsun Chang was worth about $100 million in 1915, about $43 Billion today.

Everything was going fine until the Commission toured the Commercial Museum, where they found the Chinese Exhibit to be a bunch of bullshit. Though it displayed priceless pieces from Chinese history, it included nothing about modern China, which the group perceived to be an insult. All was forgotten by the time city officials toured them around our stinky rivers in a police boat and then wined and dined the fuck out of them at the Manufacturer's Club. They left Philly the midnight after that, on their way to New York City with the goal of founding a American-Chinese Bank.
The Commission would return to Philadelphia a couple of weeks later, when they would tour the Baldwin Locomotive Works and the John Wanamaker store.

Oklahoma Tough Guys Get Their Asses Kicked By Philly Cops

Some dickhead from Oklahoma named Bill McGrath and his partner, George Gubbins, described as "a negro of large proportions" decided that they should walk around picking fights on Kensington Avenue. They started messing with some timid Kenzos who ran away, then turned on a group of young boys. The two started to draw a crowd so they announced their intentions to fight anyone and everyone who stepped up.
Unfortunately for them, two Philadelphia cops, Officers Duff and Dunbar, noticed the crowd and inquired as to what all the ruckus was. McGrath and Gubbins then challenged the two officers to a fight. Duff punched McGrath and Dunbar punched Gubbins, each knocking them out with a single blow. The two miscreants got three months at the House of Correction, where they probably got their asses kicked some more.

Kenzo Attempts to Clean the City By Himself, Faces Resistance

Two days after the McGrath/Gubbins incident, Kensington Avenue had to deal with another nut. John McGuire, born decades before the baseball player of the same name, stole a hose and two buckets from a hardware store with the intention of cleaning up Filthydelphia once and for all. He started by walking down Kensington Avenue, spraying people's homes and storefronts with  his hose. One guy ran out of his house to protest, only get to doused with the hose in response.
McGuire then turned on pedestrians, hosing them all over, causing an angry crowd to form around him. He then used his hose to defend himself from the horde. Sargeant John Dehmer came upon the scene and rescued McGuire just in the nick of time. He ended up spending 10 days in the House of Correction. Today, Kensington Avenue is still a fucking mess.

Liquor Retailers: We Won't Sell You Our Shit If There's Any Fucking Music or Dancing Going On

In 1915 Philadelphia, an 1881 city law was still on the books stating that

Of course, the law was barely enforced... until the Retail Liquor Dealers Association got involved. This organization took it upon themselves to single-handedly enforce this law by refusing to distribute liquor to establishments where the horrors of music or dancing were taking place. On top of that, they would push the License Court to revoke any liquor license of such an evil, evil establishment.
The group met little resistance until the owners of the fancy hotels on South Broad Street got involved. The luxurious-ass motherfuckers who were stayed at places like the Bellevue-Stratford and the Hotel Walton were used to a certain kind of lifestyle that required massive amounts of booze. Without it, no rich folks were going to be coming to stay downtown!

Needless to say, the hotel proprietors were pissed... especially when the Liquor Court launched an investigation into all these hotel bars because they were getting reported by the Retail Liquor Dealers Association, sending out a team of detectives. Local breweries joined in and stated that they would give their full support to the Dealers' Association's cause.
One of the hoteliers, who refused to be identified, inferred that if any liquor-related lawmen show up, they would never have enough manpower to force them to close. I wonder how that worked out when Prohibition began. The 1881 law was made useless by the Pennsylvania Liquor Control Board, which took over all liquor-related shit in PA (and therefore Philadelphia) in 1933. 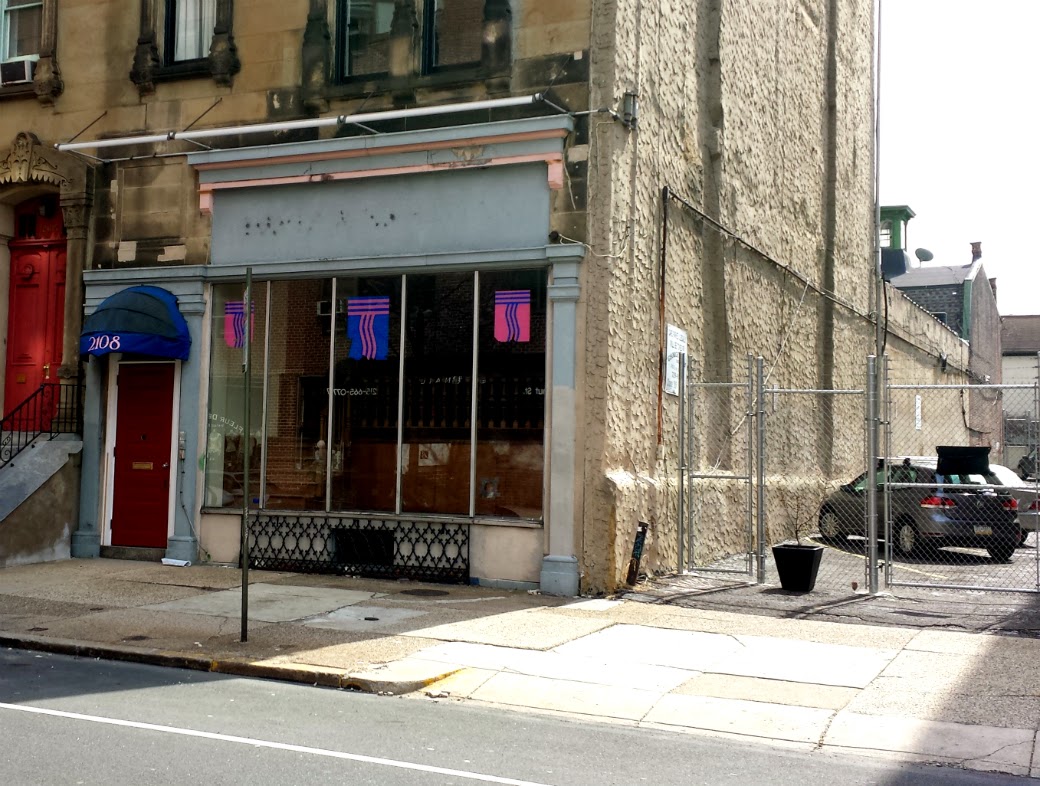 This storefront has all kinds of shit going for it. Near Rittenhouse Square, located in a historic piece of architecture, near tons of rich-ass motherfuckers. Even during Center City's darkest decades, this space was continuously successful. Yet for over 2 years, the spot has been sitting empty as shit. Even the "For Lease" signs are gone. What gives?
This great piece of empty retail is located at 2108 Walnut Street, one of the oldest surviving Frank Furness-designed pieces of architecture in the city. As I wrote on in the Hidden City Daily a couple of years ago, this address is part of the Rice-Warren Doublehouse, built in 1869.The old mansion this storefront is located in was once the home of the Chief Justice of the Pennsylvania Supreme Court!

In 1922, the Sims Wilson construction company was contracted to alter the house into offices and installed this storefront on the ground floor under the designs of architect H. Rex Stackhouse. I've had a hard time finding who was the first to lease this storefront, but looking at this picture below from 1927, I can at least tell you that if there was something there in the mid-20s, it didn't work out.

What I can tell you however, is that in 1935, this storefront became the ground floor entrance of the Philadelphia Roerich Center, an extension of the Roerich Museum, which itself was the result of a defunct school founded by Painter/Writer/Philosopher/Everything Elser Nicholas Roerich. Here, lectures, events, and exhibits of interest to the day's local intellectuals took place until 1938, when the Philadelphia Roerich Center was sued out of existence by Nick Roerich himself (long story).
An antique store then held down the space until Frank Nahikian of the Davis & Nahikian home furnishings company bought 2108 Walnut. This company had been in the city since 1906, making names for themselves as some of the top rug importers around. The company's retail store then took over the space and Frank Nahikian himself took residence in one of the apartments in the upper floors. The Davis & Nihikian store stuck around at this space all the way until 1989. In an era when Center City's was at its lowest point in modern history, Davis & Nahikian was kicking ass all over the place selling wholesale carpets and rugs out of this little storefront.

After 43 years of continuous occupation, the space then stood empty for 7 whole years before the Total Serenity Day Spa leased the space in 1996. They were able to hold onto the spot all the way up to March of 2012, when they moved down the block to 2100 Walnut. Ever since, the location has been totally empty-- but as you should know by now, it need not be.

This is the 3,500 Square Foot storefront at 2108 Walnut Street, very close to the city's extremely popular Rittenhouse Square. This space is not your typical Rittenhouse-based storefront in that it also comes with 5 off-street parking spaces at 2110 Walnut! This means that the insane amount of cars that speed by this location at both day and night can now hook a left and park right next to your store! Holy crap! Other stores near Rittenhouse Square would kill their own mothers to get something like that! When it was offered for rent by the Michael Salove Company, the lease for this spot included a "tenant improvement allowance" and a motherfucking tax abatement!! Again, something other retailers by Rittenhouse would kick a baby in the face for!

On top of the unusual auto access, this place gets passed by a whole shitload of bus lines and is walkable from the homes of literally tens of thousands of people. Its also right in the middle of a location where a whole lot of people with way too much money make their home and work. Not enough?
The place also offers a basement and private access from the 2100 block of Chancellor Street. This was a retail storefront that was able to hold down the same piece of retail for 43 years in a time when Center City was in massive decline! Need more? An entire row of rich people's houses are about to be built right across the street.

See? Your store will be able to directly advertise to the type of people who can afford a brand new, $2.3 million 5,231 square foot townhouse in Rittenhouse Square! Where the fuck else are you gonna find that? So what are you waiting for? Fill this Front!
Posted by GroJLart at 8:47 AM 0 comments