Folks, this is a different kind of Fill This Front. The storefront at 1516 Chestnut does have a tenant lined up-- but has stayed shuttered for over two straight years due to bad luck and some good old fashioned Philadelphia Bureaucratic Bullshit, or PBB. This awesomely-located 2500 square foot (not counting the 975 square foot mezzanine) storefront had little reason to stay empty as it did. Not only that-- the upper floors have been vacant for decades!
1516 Chestnut is in itself an interesting building. It was built in 1922 under the designs of Frank E. Hahn, meant to be used for both store and office purposes. Its first storefront tenant was Oshkosh Luggage, which held it down until 1930, when Llewellyn's, who billed themselves as "Philadelphia's Standard Drug Store", took over... only to close after 3 years. George B. Bains and Sons Leather Goods took over after that, only to close and be replaced by another drug store in 1939, when the upper floors were being used as the Latvian Consulate. In the 1940s, Stylepark hats inhabited the spot.

After Stylepark, the building was kind of outdated and the entire structure, including the storefront, stood vacant for years. In 1960, the structure got somewhat modernized and a Dunhill of London tobacco store moved into the storefront and lasted until 1967. That's when Ladybug, a women's clothing store, came along and held down the space all the way into the 1980s.

In the modern era, Z Ladies Boutique was the last tenant to have a store in the space. This store was one of those clothing stores that sold, shall we say, INTERESTING apparel. The kind of place where you see the clothes and say to yourself, "Oh, so this is where you buy that stuff".

After Z Ladies closed in 2011, the space went up for rent and by the start of 2012 slated to become a location of the Jacksonville, Florida-based chain Firehouse Subs. You'd think after opening 770 locations in 41 states and Puerto Rico, opening up in this little spot in downtown Philadelphia would go just fine... the thing they weren't counting on: PBB, or Philadelphia Bureaucratic Bullshit.
It ends up that the signage proposed for the storefront was to be 69.95 square feet, well above the holy zoning code's requirement of 36 square feet.

It took over a year for them to get a Zoning Adjustment, by which point someone down in Jacksonville must of just said "fuck it" and the project was dead. Not sure why the Firehouse Subs never happened, but I don't think its unreasonable to assume that having to wait over a year for stupid paperwork to go through the city's bloated bureaucratic structure had something to do with it. In the Fall of 2013, a new proposed use came to the storefront: Popeye's!!! 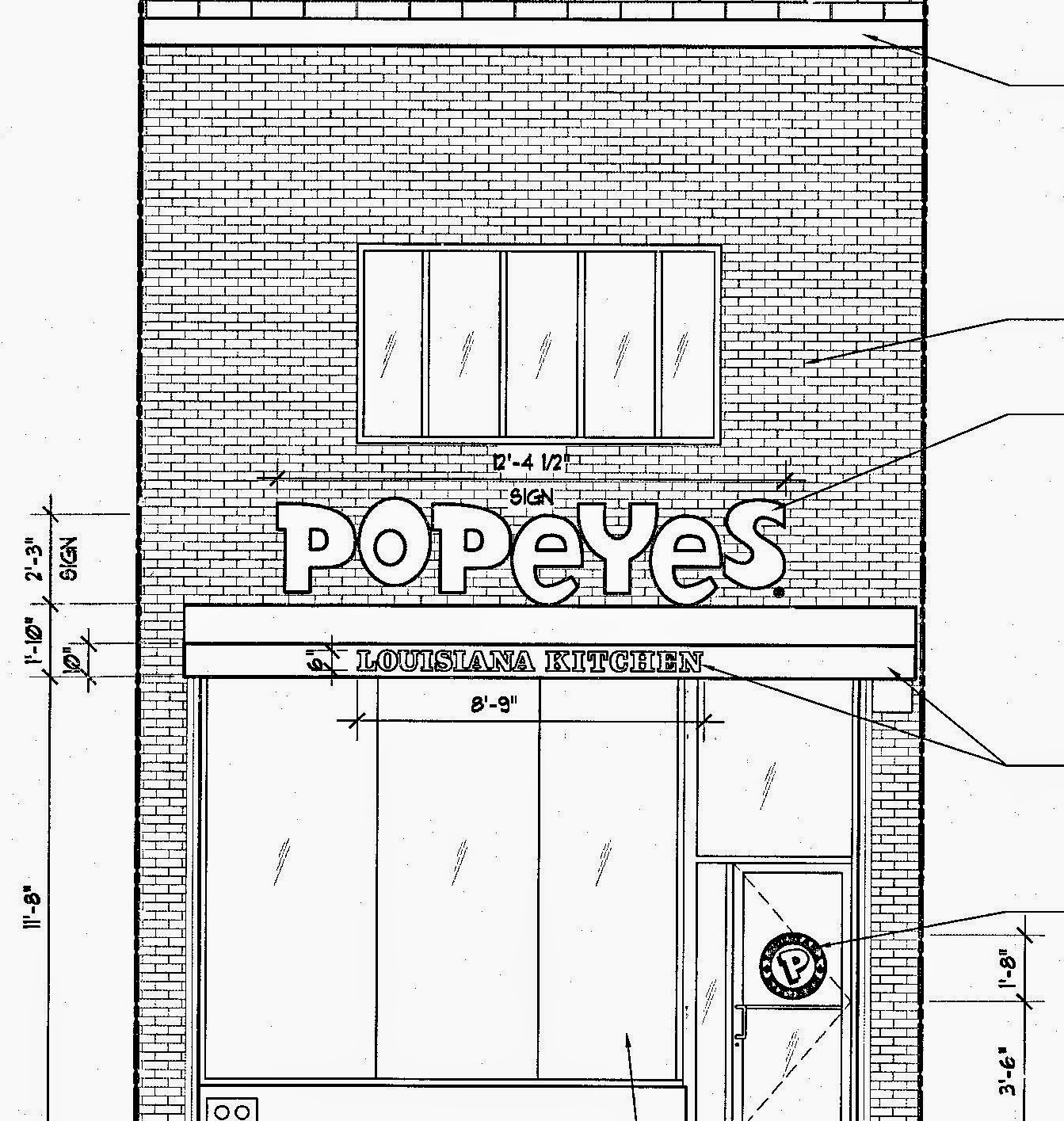 Don't worry-- this time, the sign is well under 36 square feet. Its the little medallion on the door that needs approvals. After many months, it seems to have gotten that approval because a new permit for the reconstruction of the 1516 storefront is now active. So it seems this front may get filled after all!
So why bring it up? Well, to show others like me, who get pissed off at long-empty storefronts, why they sometimes can stay empty despite having lots of folks with lots of money interested in making use of the space. However, just in case that Popeye's doesn't happen, let me just make sure to say: FILL THIS FRONT!

When in Kensington, check out these bitch-bastard-- shitty garage, Native American relic, or fraternal organization lodge? Find out at the Hidden City Daily!