This is the worst kind of Mystery Building-- the kind that no longer exists. This Great Wall of Melon Street stood for seven decades but got no goddamn respect. Here's one of those times when a building got demolished without any thought of the future. If this thing still stood, it would be the hottest loft condo building EVER.
This massive building was thrown up by General Motors and lived most of its life as a Cadillac dealership and storage area. However, part of the mystery of this building is that records can't seem to agree on when this humongous motherfucker was built. One source says it was built in 1924, but the proposal for it dates from 1927. How could a building that was already built be proposed?
Most people that are new to North Broad Street have no idea that it was once a car dealership mega-row that served the entire region. People would come far and wide to buy a vehicle from the North Broad Auto Showroom Super Row. The buildings they were in started pretty small but by the end of the 1920's were getting humongous, as they needed to store a shitload of cars.
There was a Cadillac dealership in one of the smaller buildings called Peerless Cadillac. One of the early birds to the row, it stood in a short and slender building on North Broad Street that still stands today, sitting between the S.V. Hamilton Building (also an old car building) and the Parkway Corp. Parking Garage Building (a piece of shit) today. A new larger building was sorely needed-- so Scott Smith, Cadillac dealer extraordinaire, took the entire block that was next to the Divine Lorraine, most of the 1300 block of Melon Street, and demolished the fuck out of it to create this Massive Castle of Cadillac Fucksticks.The architect was the badass behind the butt-ass awesome Lasher Building.
The dealership stayed open for the next five decades, famous throughout the region. Its presence on North Broad Street was only exceeded by the Divine Lorraine next door. The only problem is... no one seemed to want to take a fucking picture of it!! The only photos that seem to exist are aerial shots and pictures of other shit where you can see it in the background.

Cadillac held the place until 1979 before they quit. After that, the building stood abandoned and unmaintained for the next 15 years without a thought. In March of 1993, the Philadelphia Parking Authority was slated to move their entire operation into the building, turning it into a gigantic office/impound lot/hate center. This would have been huge for the Authority and the neighborhood. This would have put people back at work in this area and made their impound lot accessible to public transit, which STILL ISN'T except by crappy bus.
They had a deal to lease the building from its owner, the Philadelphia Suburban Development Corporation, who agreed to a $10 million renovation. Then came the catch. The PSDC was able to offer a super-cheap $966,660 a year rental rate if the renovation was done with non-union labor. Union labor would jack up the price of the renovation and therefore the jack up the price of rent. On top of that, the leadership of the PSDC were huge contributors to then-Mayor Rendell's campaign, so the public claimed shenanigans.
Needless to say, it never fucking happened. A few years later, the building was gone. The exact demolition date is a mystery to me but I bet somebody reading this remembers. Not only is the building gone, the entire street that was behind it is gone as well. All that's left is a massive empty lot connected to other massive empty lots creating a massive desert of dead development.

What a missed opportunity. If this thing still stood, it would be part of the current (somewhat underwhelming) North Broad Street renaissance. Think of how many condos or apartments that thing could hold. They could've called it Cadillac House! Dumbasses. Nonetheless.. the questions remain... what exact year was it built, what exact year did it go down, and where are all the pictures of it!?!?!? 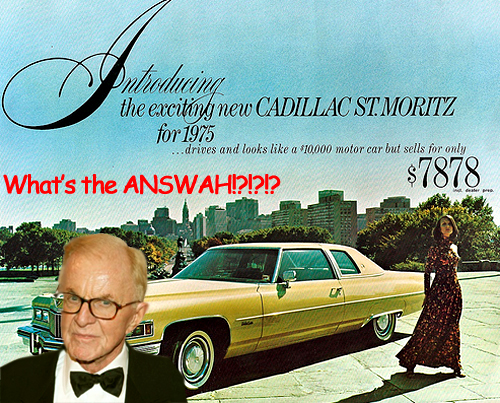