In the middle of October, 1915, a two-day celebration was held in Camden celebrating its population passing the 100k mark. Local businessmen paid for the whole affair. It started out with a parade of floats designed and built by each local industry. At night, there was another parade, led by Boy Scouts and the Walnut Street Patriotic Association. Ten dollar pieces of gold were awarded to the Boy Scout troops that had the most in line, the best display, and came from the farthest distance.

On the second day, there was a Baby Parade, where proud parents created floats and presented Camden's latest offspring to the crowds. Ten dollar pieces of gold were awarded to the best float, an order of one dozen photographs was awarded to the prettiest baby, and a $2.50 piece of gold was awarded to the fattest baby. After that, a Charlie Chaplin impersonation contest was held. Five bucks and $2.50 were given to the first and second prizes respectively.
Today, Camden doesn't have much to have a parade about. While the future construction of 1,000 houses was announced in the 1915 parade, Camden is now going about demolishing 600 houses, no doubt some of those that were built during that period. Things are shitty enough in Camden right now that the opening of a supermarket there was big news. The current population of Camden is 77,250.

Despite vaccines developed in 1897, 1898, and 1909, in the middle of October, 1915, it was revealed that there was an official Typhoid outbreak in Philadelphia. 112 cases were reported and doctors warned that potentially thousands could be afflicted and that many more could be carrying and spreading the disease.
Typhoid starts out as a really shitty flu-like sickness that seems like its going to go away until the 2nd stage, when the patient will go through periods of uncontrollable diarrhea and extreme constipation. Eventually, a big distended belly will occur. In the third stage, the patient becomes delirious and then goes into what's called a "Typhoid State", lying down exhausted with eyes half closed. Even if someone manages to survive it without treatment, symptoms can re-occur up to two weeks later. Its a pretty shitty disease to get.
After an investigation, the State Department of Health blamed the curbside vegetable markets for the disease. They were able to isolate Salmonella Typhi in various products purchased at these markets, and declared the origin found. In the Spring of 1916, Typhoid ravaged the city again. Initially thought to be a whole other outbreak, it was eventually found that this was a second wave of the 1915 outbreak. This time, the State Department of Health took it a little more seriously and investigated markets, restaurants, and bars more thoroughly. They then blamed saloons for the spreading of the disease, stating that their practice of providing free lunches for customers spread the affliction through the common utensils that were used.
Interestingly enough, 1915 showed the least Typhoid deaths in Philadelphia up to that point. For example, in 1906, Philly had 1,063 Typhoid-related deaths, while 1915 had only 106. An antibiotic treatment for Typhoid was developed in 1948 and there are now seven different Typhoid vaccines available, so no one in the developed world gives a shit about it anymore. Nonetheless, outbreaks still occur all over the world, most recently in 2005 the Democratic Republic of the Congo where 42,000 cases were reported.

At the same time Typhoid was hitting Philadelphia hard, Chestnut Blight was kicking the American economy's ass. At the time, chestnut trees were found all over the country and were a major staple. Not only were chestnuts themselves a valuable food, chestnut wood was used for telephone poles, roof shingles, you name it. Chestnut trees were prolific and grew gigantic-- ones over 100 feet tall with a diameter of 8 or 9 feet were found in every city park.
At the turn of the 20th Century, Cryphonectria parasitica was accidentally brought to America by East Asian trees planted at the Bronx Zoo. By 1915, the state had already developed the Pennsylvania Chestnut Tree Blight Commission to combat the destruction. At this time in 1915, it was determined that 88% of the Chestnut trees in the city were infected. Local industry was really upset about this, especially the leather tanners, who used Chestnut tannins for their processes.
The city went about clearing most of the Chestnut trees in the city at this point, stripping them down for use as telephone, telegraph, and electric poles. They then stored them all in a big pile at the electric company's yards in North Philly.

The Commission figured that they could save the American Chestnut Tree if they cross-bred it with the Asian Chestnut Tree, which was immune to the fungus. This was attempted in the 1930s and 40s by the USDA. They managed to create one single hybrid in 1946 that survived the blight... until 1976.  Big-ass American Chestnut Trees became a thing of the past... its hard to get one to grow over 15 feet before the fungus takes it out. A few sixth-generation hybrids have been able to resist the fungus, but there's only a handful of them.
In 1987, an attempt was made to create a virus that could take out the fungus that causes Chestnut Blight, but the fungus spreads more quickly than the virus could keep up with, so it didn't work. Today, genetic manipulation is being used to create mega-hybrids that will be able to resist the fungus. Its possible that in our lifetimes, the American Chestnut Tree will tower over all of our shit just like it used to. The same fungus also took out a once-common edible nut-bearing bush called the Chinquapin, but no one seems to give a shit about that.
Posted by GroJLart at 7:30 AM 0 comments 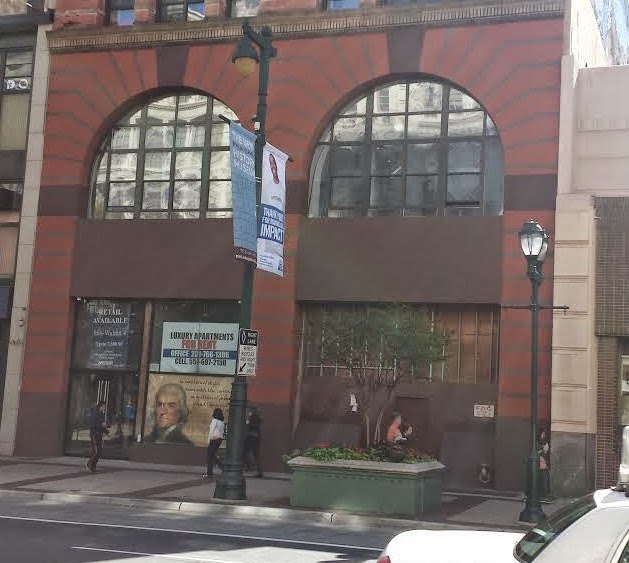 Posted by GroJLart at 8:08 AM 0 comments

I've been trying to find the origin of this building ever since I started this shitty blog. Finally, after 3.5 years, I've finally found it. Read it all at the Hidden City Daily!
Posted by GroJLart at 10:33 AM 0 comments