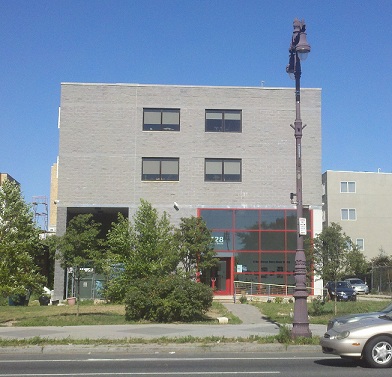 What a pile of fuck. Set way too far back on Broad Street to be noticed.. but then if you do actually notice it, it looks like shit!! Ugly. This is supposed to be Broad Street, the Avenue of the Arts? What the fuck were they thinking in placing a building that far back?
This building is such an asshole that it lies about its address. The shitbox says "728 South Broad" on it, yet its true location is 716 South Rosewood Street, an old segment on an interstitial street formerly known as Lloyd Street. There are old streets surrounding the motherfucker on other side too... its other REAL addresses are 1401 Pemberton Street (formerly Bangor Street) and 1401 Senate Street (formerly Nelson's Alley). The fucker is 100 feet away from Broad Street. Liars.
This boring ugly 28,000 square foot piece of shit was built in 1997 by the Brandywine Workshop, an arts education non-profit, who, in their own words, "enhance the role of visual and related media artists and their impact in contemporary society". So you want to enhance the role of visual artists but then create a visually awful building? The setback was a parking lot until about 2008 when it was landscaped in order to create a connection between their two buildings. I say "landscaped" with a pretty wide definition. The "public plaza" is just a bunch of weeds and dirt with a sidewalk running through the middle. There are empty lots that are better landscaped than that!

I don't know who the fuck the architect was, nor do I care... a five year old with legos could have come up with something more interesting. If you're supposed to be this arts advocacy group, why the fuck don't you advocate for your own building's design? How about a sign that says "Brandywine Workshop" on it? Their buildings look like their part of the Philadelphia Clef Club nearby. Why? Because the Clef Club decided to put on a fucking sign on their building!!!
Is that a loading dock right on the front of the building? What the hell were they thinking? Besides having a big empty area towards the back, there's also small streets running around the sides! ANY other side would have been fine for a garbage area... but where did they put it? On the front, behind a chain link fence!
There's really not much else to say about this piece of dirt. Exposed cinder blocks? Get real. Hopefully Brandywine will one day need that space out front and build a proper building along Broad Street that we can all be proud of. Don't get your fucking hopes up.

Apparently I was wrong about the "Don't get your fucking hopes up" part of this article. Check it out:

From the Comments section below:

Thanks for noticing! For what it's worth, Brandywine Workshop has in fact been exploring ways to improve the appearance and thermal performance of the existing print shop and office building, as well as proposed a multi-purpose arts pavilion and rain gardens on the empty lot, which is currently seeking funding. An exhibition of prints produced at Brandywine over the past 40 years will open at the Philadelphia Museum of Art in Septemnber. Here's a link to preliminary design studies by Brandywine Board member Ted Agoos' firm, Studio Agoos Lovera.....
Posted by GroJLart at 7:37 AM 1 comments

Some buildings are so fucking lost that barely anything mentioning their existence can be found. Here's a little smattering of Lost Buildings that are Very Lost. 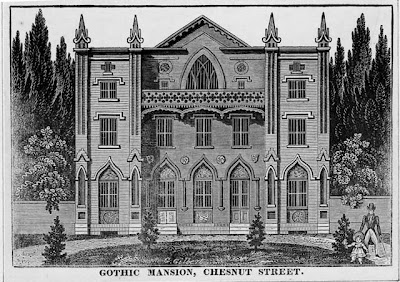 Though numerous records and descriptions about this crazy bastard exist, many are in conflict. Some say John Dorsey, carpet manufacturer and auctioneer, who owned and lived in the mansion, designed it. Others say Robert Mills, the dude who first engraved a picture of the house (not that one above but a different one), was the architect. Though sources agree that the building stood on the site of Dorsey's old carpet factory, some actually state that the old factory and the mansion are the same building, just altered in 1811-1813 to become a house.
The official demolition date for this gothic motherfucker is 1853 but some sources say that an addition was built in front to meet the street and that the rear of the building was stripped down. Either way, the building that was added on or replaced it was a theater (Concert Hall) that later became the Free Library of Philadelphia. Its possible that this was one of the most altered and re-used buildings in the city's history... or not. 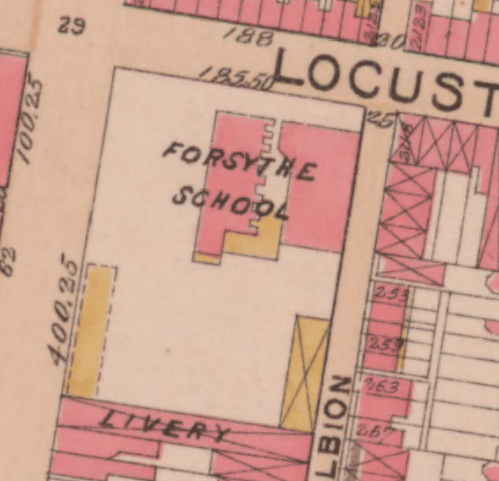 This was a short-lived private school that had a pretty large Addison Hutton-designed campus at 22nd and Locust Streets. From what I can tell, this place only lasted 10-15 years. John E. Forsythe, an educational theorist, was founder and principal. Forsythe had some kind of impact on education in his own time but seems to be forgotten now. One of his surviving ideas was the rote teaching of math. Forsythe believed that math should be taught as just numbers and figures, without any context to how they connect with the real world. He figured that younger children would be able to learn more advanced math if real-world application of that math completely ignored. No visual record of the school seems to exist.

Robert Mills, who MAY have been the architect of the Gothic Mansion, was a badass but mostly forgotten architect of the early 19th Century. The first edifice of the First Unitarian Church of Philadelphia was located at the northwest corner of 10th and Locust Streets was built in 1812-13 and only stood for 14 years. In order to distinguish themselves from other religions, the early Unitarians wanted a church shape that was different than any other-- an octagon. Robert Mills' octagon-shaped Monumental Church in Richmond, Virginia (still standing and pictured above) had just been completed in 1811 and it is theorized that the old First Unitarian in Philadelphia looked pretty much the same.
The Unitarian community in Philadelphia grew so quickly that the little octagon was considered a piece of shit pretty quickly. It was demolished in 1827 and replaced by a William Strickland joint that stood for almost 60 years. The site is now part of Jefferson University.


I mentioned this place back when I talked about Herkness' Bazaar. This was very similar--- a circular building that held a large mural with special lighting in order to create a totally immersive environment. Built in 1888 and owned by Thomas Wanamaker, this one originally displayed a depiction of biblical Jerusalem and later the Battle of Gettysburg. That very same Gettysburg mural has been rebuilt and restored and can still be viewed in Gettysburg, PA.

The Cyclorama was demolished in 1904 and replaced with the long-lost Lyric Theatre. The site is now part of the PA Convention Center Expansion.

There's plenty more like these.. lost buildings with barely any mention, description, or image existing. So many fucking buildings have come and gone in this city that it stands to reason that some are COMPLETELY forgotten. If you know any info about these buildings, know the REAL story behind the Gothic Mansion,  or know about a Lost Building that you think I don't know about, e-mail me at rhaandarite@gmail.com.

Posted by GroJLart at 7:31 AM 1 comments

Bounded by Bainbridge, Kater, Clarion Streets and a Hess Station 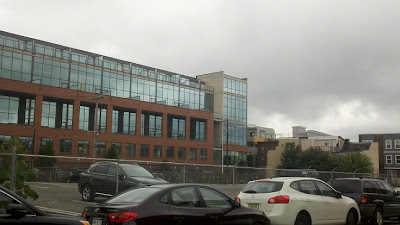 Here's a surface lot that took a long time to become whole, but once it did, has created a gigantic empty space in an area already imbued with empty spaces. Adjacent to a remnant of an ancient highway, this asphalt assfruit never should have gotten to this point. There is hope on the horizon, however... this lot's days are numbered.
Read more at the Philadelphia Citypaper's Naked City Blog!
Posted by GroJLart at 7:49 AM 0 comments 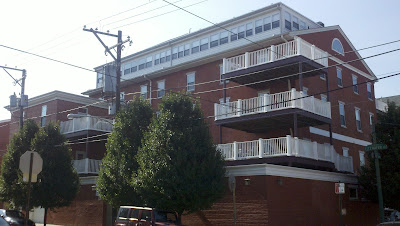 Balconies... balconies everywhere! Under all that modern exterior embellishment lies an 158-year-old building. Converted and re-converted to different purposes over the generations, this tough little building's current use as a residence is actually quite appropriate.
Read more later today at the Hidden City Daily!
Posted by GroJLart at 9:34 AM 0 comments