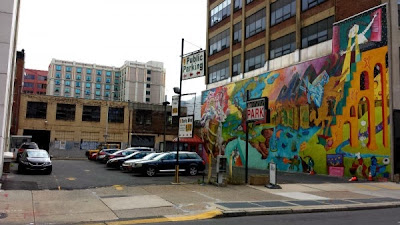 What a pisser. This perfectly usable space on the 200 block of North Broad Street between Race and Vine has been soiling up this block for the last 86 fucking years. The location has a history of being part of the early 20th Century Auto Showroom megacenter called Automobile Row. Despite seeing many occupants over a century of constant development, this piece of shit is now and has been a crappy surface parking lot. Two of them right next to each other, in fact. The story of this lot is told by how it splits into two properties: 211-213 North Broad and 215-217 North Broad.
Read more at the Philadelphia City Paper's Naked City Blog!
Posted by GroJLart at 3:40 PM 0 comments