Surprise!! Yet Another Highly Inaccurate Depiction of Philadelphia 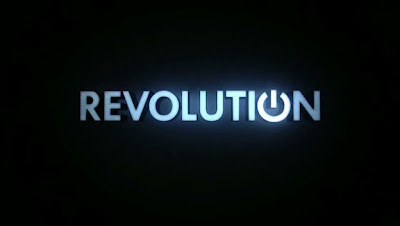 So if you've never seen the show Revolution, this is kind of a spoiler, but not really. The program depicts a twisted future that takes place 15 years after electrical power has mysteriously shut down throughout the world. In the show, the bad guys, a paramilitary dictatorship called the Monroe Republic, have their headquarters in Philadelphia. Until this last episode, the only Philly outdoor scenes showed a post-apocalyptic Independence Hall with accurate buildings in the background.... I was proud to see our city portrayed, as most post-apocalyptic cultural depictions ignore Philadelphia completely (except 12 Monkeys, of course).

Then came this last episode... *spoiler alert*. In this one, the bad guys re-activate an old-timey train and use it to travel to Philly. When they arrive, there is a brief outdoor scene that shows a disturbing number of inaccuracies:


Is that supposed to be South Broad Street? It has to be... the angle of City Hall is unmistakable. Where did this singular outdoor train track come from? What the fuck? So from what we see here, the Monroe Republic, despite having no electrical power, was able to knock down scores of buildings and construct a railroad that crosses Broad Street, along with an open-air sunken parking lot.
Next to the railway, there's a huge old building that says "Pennsylvania Railroad" on it, which seems to have an addition that sticks out halfway across Broad Street. I guess that's supposed to be the old Girard Bank/Ritz Carlton in the background, but it looks weird. Then there's this:

The skyline shows the Saint James and some other building that's not really there. What the fuck? What is the Saint James doing northeast of City Hall? Are we to believe that this loosely organized paramilitary dictatorship disassembled the Saint James and rebuilt it elsewhere? With no electricity? Why the fuck would they do that? And how?
I know i'm probably reading into this shit way more than I need to, but this is worse than 10th and Wolf's Pittsburgh-filmed Philadelphia and Rocky's mysterious EL running through a South Philly that looks like Kensington. If someone really did get an old-timey train working well enough to travel between Indiana and Philadelphia, they would arrive at 30th Street Station, underground. Failing that, they would arrive at Suburban Station, underground. Failing that, they would have arrived at Market East Station, UNDERGROUND!!! Instead, the show-makers took the time to assemble this super-inaccurate post-apocalyptic Philly where a rail line comes right up to Broad. Of course, in a powerless Philadelphia, all of the underground tunnels would be completely flooded. Maybe they (the fictional people) used a freight line. Even so, why would the train arrive from the East like it does in the scene? Did they drive the train backwards?
Wait a minute... if 15 years have gone by, shouldn't there be vegetation growing every which way out of every street and sidewalk? You see how our streets get after a single summer, where 6-foot-tall weeds pop out of solid asphalt in a matter of months... how is post-apoc Philly so clean? You can see some shit popping up behind that little wall that blocks Broad Street, but the rest is completely weedless. Does the Monroe Republic employ or enslave a fleet of weed-pullers that do a better job than our current city workers who have access to electricity? Fucked up.
Look.. I know its just a stupid TV show made in California, where people couldn't give a shit what Philly looks like... but even a slight bit of accuracy would be nice. There's over 1.5 million people in this city, many of which are going to see the program. That's 1.5 million people who know an incorrect Philly when they see one. Fuck, Angie was more accurate than this shit. Shooter had a sniper shooting the front of Independence Hall from Kensington, and even THAT was more believable than this crap. Bunk, I say. Bunk.

Posted by GroJLart at 6:30 AM 4 comments 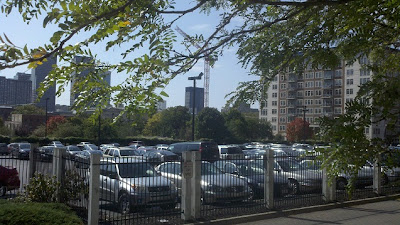 This right here is a lot with some really shitty luck. Though a surface lot for nearly 40 years, it still hasn't beaten its own record for long-term emptiness. Now that's fucked up. Though there is some hope for the future of this space, its currently mired in a shitty shituation.
Read more at the Philadelphia Citypaper's Naked City Blog!
Posted by GroJLart at 8:31 AM 0 comments

The Consortium Child and Adolescent Services 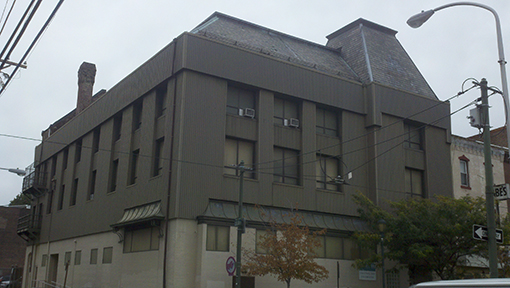 Adaptive Re-use is usually a good thing, but sometimes it goes horribly wrong. This is one such example. Under that incredibly ugly facade lies a Furness masterpiece. A once-great building stifled by good intentions...and ugly paneling.
Read more later today at the Hidden City Daily!
Posted by GroJLart at 8:55 AM 0 comments