Here's one of those buildings that reminds you how horrible the 1970's were to architecture. In almost any other decade (except the 50's or 60's), a luxury apartment highrise such as this one would have SOME measure of design to it... this motherfucker has none. It looks like a crappy factory building with smaller windows and less interesting details.
Not only that, but it probably has the most conspicuously shitty parking garage pedestal I've ever seen. An exposed concrete box that runs 13 stories up. That's farbage ba-garbage. The shittyness of this structure began in the early 70's. At the time, an attempt to bring more residents back to the city was in full effect.
The vast majority of the city's workforce lived in the burbs and feared the city. This shitbox was created to house that segment of the workforce who was sick of driving or taking the train to work everyday. The residential buildings that already existed at the time were outdated and obsolete. This place would be new and modern with amenities galore, serving the former burb-dwellers' every need.
An empty lot existed at the Southwest corner of 15th and Locust with one crappy small building on it. This would be the perfect spot for a new luxury apartment highrise, the tallest residential building ever constructed in the city at the time... 360 feet of fuck.

The new building would be called 1500 Locust, after its address. Goddammit!! I hate buildings with huge parking garage pedestals and I REALLY hate when buildings are named their address. They couldn't figure out a fucking name for it? Is it really that hard? They could have called it the Boxitecture House or the Brick Bastard Apartments. How about Parking Garage Tower? The Locust Shitbird? Construction began in 1972 and was finished in 1973.

The apartment was a huge success. Though shitty-looking, it enlivened a previously declining neighborhood and spawned a less butt-fugly little brother, Academy House. At least that one has a name. The two buildings together, along with the presence of the kick-ass Lewis Tower (now Aria), make 15th and Locust the most delightfully shady corner in the city. All those NIMBYs that whine about shadows all the time need to go to 15th and Locust on a hot summer day and feel how nice and cool it is. That'll learn 'em.

Now that's a cool office building. Its so fucking tough that it has a big-ass bell tower like its a cathedral. Its like they assumed that people would instantly start worshiping the structure, so it might as well have one. This is how you design a facade, modern motherfuckers.
It all began in June of 1888. At this point in time, Penn Mutual Life Insurance was kicking ass and taking names all over the place. They were smoking their many many competitors due to the fact that they provided equal life insurance coverage for women as men for the same price. A special committee was formed to plan a new headquarters building for the company.
Arguments went on for months over whether the new building should be exclusively for the company or be a larger building that could rent office space to other companies. Eventually, the latter plan was chosen and Supermegitect Theophilius P. Chandler was commissioned to design it. The building they were already occupying was in a great location for the time, so instead of buying a new plot of land, they would just demolished the fuck out of their old building and started constructing the new one. They moved out of the old building on February 22, 1889 and stayed in some temporary offices at 1008 Walnut Street.
A year and a half later, on Thanksgiving Day, 1890, the brand-new 10-story Penn Mutual Life Insurance Company building opened. It was such a kick-ass design that people barely noticed the awesome Willis G. Hale building next door. The 900 block of Chestnut became one of the most beautiful stretches of road in the whole city.
The building was considered high tech as fuck because it had a goddamn circuit breaker. It also claimed to have more electrical wiring than any other building in the city at the time. Penn Mutual rented out the offices that faced Chestnut Street and occupied a little five-story box in the back that faced Chant Street (now Ludlow).

Other architects of the period didn't think this building was all that special. They thought the cool-ass tower was too thin and tall. They thought the upper floors of the facade didn't match the lower floors. They made a point of saying that the awesome marble facade did not look as good as the old building. What a bunch of jerks. Look at that fucking building! Its a booooomb!
Penn Mutual would only stay for 23 years until moving to a much larger building on Washington Square. From there on out, they wouldn't move again, just keep adding on to their 1913 structure until it was ultimately butt-fuglified in the 1970's. After Penn Mutual, Chandler's Kick-ass Cathedral of Roundhouse Taintpunches lived on with various tenants for another 19 years. Then, at only 42 years old, the building, along with the entire block of other kick-ass buildings, was unceremoniously demolished to make way for some nice-looking but unnecessary federal pork projects that still stand there today.

Demolishing this block was a fucking crime. Though the buildings that replaced it are neat, they pale in comparison to the shitfucktastic super-structures that once graced this stretch of Chestnut Street. We'll never get a bunch of nice buildings like these again. What a shame.
Posted by GroJLart at 6:27 AM 4 comments

On the Delaware Waterfront between Market and Chestnut Streets


This shitbird empty lot is even more useless than everyone thinks. This piece of land isn't even supposed to be here, and, as if the fake land knows this, has the unlimited power to stop any project that gets proposed for it. Its a disaster of the triple-P variety, Piss Poor Planning.
Read more later today at the Philadelphia City Paper's Naked City Blog! 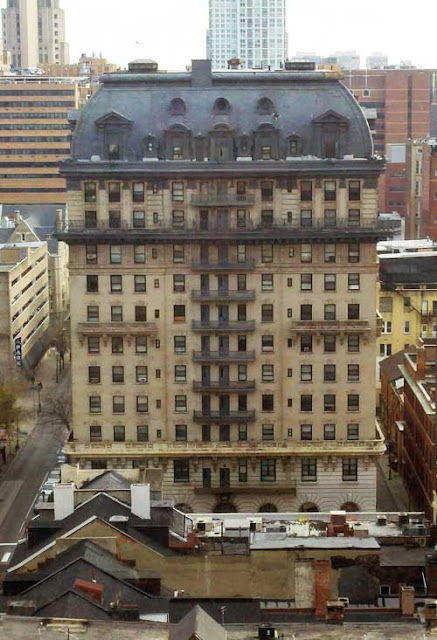 They sure don't make 'em like this anymore. Look how beautiful this little building is, even after being mangled up by countless alterations and tarnished by neglect. This is the building that launched Horace Trumbauer into the highrise world. Once one of the most prominent buildings in the city, this masterpiece has fallen into obscurity.
Read more at Hidden City Philadelphia!!

GroJLart, King of Philadelphia and France
Posted by GroJLart at 7:42 AM 1 comments