Goddammit, I love Chestnut East. All at once the most depressing and exciting part of Center City. This little stretch has been on a downward spiral for many years, but is just now starting to bounce back into its former glory. I always knew this day would come and now it has.. but there's still plenty of work to do.
This corridor spent well over 100 years as one of the most important, busiest, and bustling parts of the city-- retailers, businesses, schools, warehouses, libraries, and even parking structures used to step on each others' nutsacks just to get one small little bit of this short part of a long street. The middle piece, the 1100 and 1200 blocks, changed so quickly over the decades that its hard to quantify it all. Over 150 years, those two blocks went from stately country villas to residential rowmansions to rowmansions-turned-businesses to warehouse-factories-on-storefronts to the Piano-selling district/business offices to retail clothing nexus to shithole to its current state of rebirth.
Though some are out of date, I'd like to list and revisit all the Chestnut East-related writings I've done over the last few years:


I began at the beginning with the second-ever Philaphilia blog post, when I had like 2 readers and never intended to write this shit for more than a month or two. This was where I first explained why Willis G. Hale Ain't Nuthin' to Fuck With.

After that, I trashed the perpetually ass-kissed Mercantile Library in all its Mid-Century Modern glory. Its up for sale again, by the way, and supposedly Brickstone Realty, the latest heroes of Chestnut East, are interested.

Of course I followed with the sad story of the big-ass garage on 900 block of Chestnut, then added even more two years later

I couldn't resist talking about this mysterious structure of ancient origin: the Hamilton and Diesinger Building at 1208 Chestnut. Not only do I know a lot more it about now, but was given a full picture of by a Philaphile by the name of Kevin McMahon.


Soon after I told the zany story of the Zane Building at 1207 Chestnut, right across the street

Not a month later I lamented the Mid-Century shitfacade that combined two awesome buildings from the mid 1800s, now being destroyed in favor of Chestnut East's latest miracle

I then managed not to write about anything on Chestnut East for nearly two whole years. However, when it came time to bring out the new Philaphilia subject Fill This Front, four of them ended up being on this stretch (including the second Jefferson garage one listed above):

The empty corner storefront in one of my favorite buildings

Had enough? Well... I'm not done. Despite writing all that shit about Chestnut East over the years, there's even more shit I know about the buildings/lots/properties along this street... including a whole lot of content about Chestnut Beast's past, present, and future. Instead of writing it all down (laced in profanity, of course), I will be giving a tour in collaboration with Hidden City, just like I did for Broad Street. Therefore, if you want to know even more about my favorite part of the city, come on down to the Forgotten Chestnut Street Tour on September 13th. Space is limited so sign up now!!

Oh... if you missed the Forgotten Broad Street Tour, I'm doing another one on September 20th!
Posted by GroJLart at 6:39 AM 1 comments 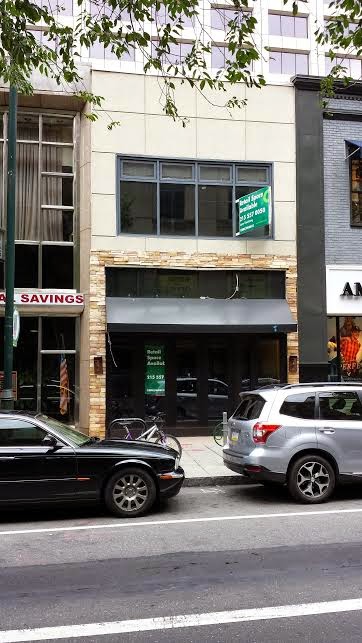 Ok, so some folks think this is a cursed storefront unable to keep a tenant for very long, evidenced by how this place went from being Nextel Wireless to Goodburger to Famous Dave's to Moe's Southwestern Grill in a very short amount of time.
Well, those people don't know shit. This location, 1725 Chestnut Street, definitely has the ability to hold onto a store. From 1982-2005, the Nathan Muchnick Audio/Video Store kept itself going in this very front. Before that, a music and later video store that went through a lot of names but closed as Video Place was there, and before that, a store called Music City occupied the space. That brings us all the way back to the early 60s, when it had been vacated by the first store to use this space after it had been overhauled into its modern configuration in 1955, Marshall Millinery.
Therefore, though the place has seen 4 different stores in the last few years, before that, it only had four different occupants. That's crazy. To add insult to injury, this place has been completely empty now for well over a year.
Another potential occupant, IT'SUGAR, the place you find in tourist traps where you can buy giant versions of candy bars and shit, applied for a permit for this location in December 2013. It either never happened or somehow, 9 months later, is still in limbo. This last April, the son of Nathan Muchnick sold the building to the NYC-based Midwood Management for $2.2 million.
Wow-- $2.2 million? That's $367 per square foot! Obviously I'm not the only one who sees the value in this place. After all, its located on the 1700 block of Chestnut Street, only two blocks from Rittenhouse Row and has been catching new stores like flies lately. American Eagle Outfitters just moved in next door and Nordstrom Rack is coming in down the street. Uniqlo is under construction a block away. This little area is the shiznit!
Let me put it like this:

This is the storefront space at 1725 Chestnut, which consists of the 2000 square foot first floor and 2000 square foot basement. You also have the option of taking the 2000 square foot second floor, making 6000 total (roughly-- the building is 17'4" wide and 115' long). The place is entirely fit out as a restaurant and is available for immediate occupancy. This means you can just walk right in and start cooking shit! The location of this place is key-- very close to Rittenhouse Row, our highest-end shopping district. One block away from Liberty Place, which, in addition to a shitload of trophy office space with workers who make a shitload of money, there's also multi-million dollar condos with residents that have lots and lots of disposable income. Did I mention that Liberty Place also has a hotel?
Even if all that shit wasn't there, you also have the entire Central Business District to the immediate North, lots and lots of monied residents to the immediate South. The area is VERY accessible by public transit, served by a countless number of bus lines, a whole bunch of trolley lines, and regional rail not too far away. Truly, it doesn't get much better than this for a location. Be like Nathan Muchnick. In 1982, he moved all the way from 52nd street and took a risk on this location and his store flourished there for 33 years, ten years after his own fucking death! Here's a song about this storefront by another guy from Philly named Nathan Muchnick (I'm thinking he's probably related):


What the fuck are you scared of? Here's the listing for the place, which is being managed by CBRE | FAMECO. FILL THIS FRONT!!!
Posted by GroJLart at 8:05 AM 1 comments

Kind of a short one today because this building right here doesn't have much of a history, save for its ugly-ass design. Nonetheless, it shall be called out.
Ya know, I really love the 1500 block of Sansom Street... its one of the only streets left in Center City that harkens back to the city's early-mid 20th Century look, when small formerly residential and commercial buildings would get stuffed to the gills with retail stores and offices, each putting up signs that stuck out into the street. This block is one of the only blocks left that carries that old spirit. However, this building right here fucks up the rhythm of the whole thing. A mid-century shitpile with late 80s alterations. Two horrible time periods in architectural design combine for one ugly-ass building.
It started in 1960 when the Barclay Brothers printing firm, makers of blueprints and photostats, decided that their little workspace at 1516 Sansom wasn't enough. They purchased 1510-1512 Sansom Street and kicked all the tenants out. That November, they proposed a new 9,300 square foot reinforced concrete facility designed by W.F. Silliman, a silly man who did a lot of architectural design work in Philly but, from what I can tell, only has one other surviving structure in town (and it sucks too).
The design got rejected by zoning-- not because it was going to be ugly, but because it had no outdoor space. The code of the time required 5% for this particular parcel. After 4 months of going back and forth with the ZBA, the Barclay Brothers firm's ugly new building was approved. Demolition and construction started in March 1961 and was over by the end of the year.
Unfortunately, I can't seem to find a photo of the 1961 configuration of the building's facade (it must have been so bad that no one wanted to take a picture of it) but the windows were all in the same places so you get the idea. So what happened that makes it different today? Well, Barclay Brothers got bought out in early 1986 and the building sat vacant for three whole years after that.
In 1989, the dentist that still works on the third floor of the building today took ownership of the place and gave it a head-to-toe renovation. Included in this was a whole new facade designed by a firm called the Kwait Organization, which sounds like it was named after a Klingon. I'm not sure exactly how much they changed but the construction permit issued September 20th, 1989 states in part:

Whatever they did, they fucked up. Look at that piece of shit. Dirty-ass cement/fake stone-looking crap for a facade, glass blocks, ribbon windows. Ass! There's nothing much else to say about this place other than IT SUCKS! Fuck it, I'm done.

Posted by GroJLart at 7:07 AM 0 comments