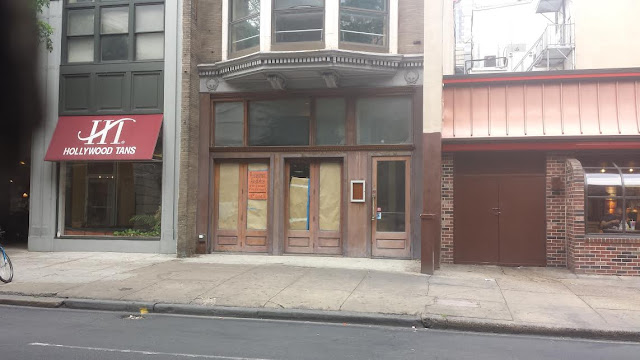 A year goes by an this nicely laid-out restaurant space is still empty. What the hell is going wrong? Let's see if we can figure this one out and finally FILL THIS FRONT!
1105 Walnut was built in 1901 under the designs of J. Franklin Stuckert, a pretty prolific local architect who doesn't really get any respect. He did the Heid Building in the Eraserhood, the long-lost Hotel Vendig, and the bitchin'-looking Berean Presbyterian Church. This and the buildings that once stood where the Wendy's is now were built due to a widening of Walnut Street in 1900.
The building's first occupant, the Bussa Sculptured Leather Company, used the storefront for their walk-in sales so I guess they were the first user of the space. In 1905-06, S.N. Rhoads' famous Franklin Book Shop sold exotic and hard-to-find books here for a couple of years before moving down the street.

A couple of decades later, the building became the LaSalle Hotel and they used the ground floor for their restaurant of the same name.

I'm not sure what was going on with it for the next few decades after that but in 1956 its owner of the period decided it was time to knock it down and build something new. For some reason, those plans were shelved and the building survived. By 1965, the storefront was back in use as a barbershop.
In 1983, the front went from use as a psychic's place to a jewelry store that only lasted one year. In 1984, Formal Dimensions came along, renting out tuxedos from the place for many years thereafter. The ghost sign of the place still decorates the eastern party wall to this day. 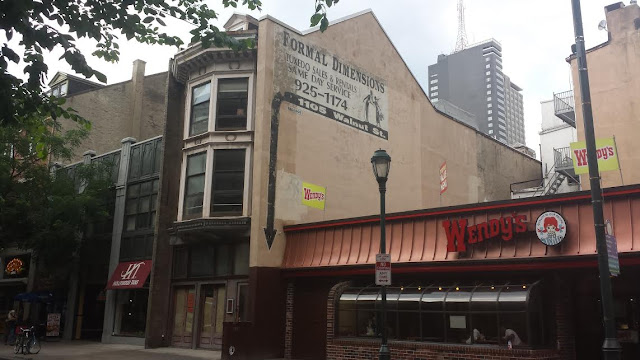 In 2004, some new owners bought the building for $895k and commissioned architect Sabrina Soong to make a new storefront design, combining with the basement store retail spot(where School of Hard Knox Barber Shop was) with the 1st floor and wiping out a portion of the 2nd floor to give the space a mezzanine. In 2007, the storefront opened its doors again as Qdoba Mexican Grill.

Things seemed to go just fine for the place but just like what happened on the 1500 block of Walnut, a Chipotle opened half a block away. There's no way of knowing if it was related, but this Qdoba location was closed by the start of the Summer of 2014. The place went up for rent that August and is yet to be filled-- but its mysterious. The listing for the place went "Off Market" November 16th but still has a "Restaurant Available" sign on it. The sign has no phone number so I don't know how anyone who is interested is supposed to get in contact with those responsible. Maybe this is like the Home 2 Suites space where someone has leased it but hasn't gotten their shit in a pile yet to get opened.
Anyway, just in case it IS still available, let me tell you about it. The spot is 3,200 square feet (basement + ground floor + mezzanine), has 20 feet of street frontage, and, like the sign says, is fully equipped for restaurant use. This is a great block to be on if you're a food establishment, since you're right next to Jefferson Hospital, where thousands of daily employees and patient's visitors get hungry every day. You've also got the Forrest Theater across the street, and when they do have a show running (which is unfortunately like once a year), there are tons of folks milling about. At night, the bars on the block give you a whole new mess of customers.
The space has great transit access-- Walnut Street has a whole shitload of bus lines that run along it and, like others I've mentioned, it's very close to the system's longest and most-used bus line: the 23. Combine that with proximity to the 11th Street EL stop and Jefferson Station and you get some good-ass transit options. Now all you have to do is FILL THIS FRONT!

UPDATE 7/15/2015: Someone must have read this post because this space now has a listing on Loopnet with some actual contact info on it!! Of course, no price is listed because why the fuck would anyone want to know!!? Idiots.
Posted by GroJLart at 6:29 AM 0 comments