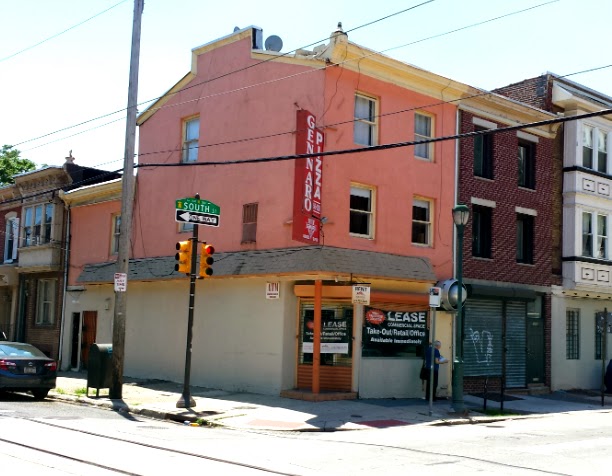 Fuck this shit. I know this part of South Street might not exactly be Retail Heaven, but it sure has come a long way in the last 10 years or so. Therefore, there's no reason why there should be years-long empty storefronts at two prominent corners with assloads of foot traffic and thousands of permanent residents nearby. I'm talking about 1200 and 1300 South Street, the old Gennaro's Pizza and the old Tattoo shop.
First, 1200 South Street, the 850-875 square foot space at the southeast corner of 12th and South. For decades in the early 20th Century, this location was Leroy's Drug Store.

At the start of the 1980s, it was a doctor's office, and then, when its current owner's father took possession of the place, became a restaurant. In 1990, Gennaro's Pizza began their 21-year reign at the space until moving to 1315 Bainbridge Street in 2011. Ever since, this space had been a big embarrassing hole of empty.
A couple of years ago, there was some uproar about how the landlord attempted to get some interest in this space. They superimposed a sign on top of the old Gennaro sign depicting the silhouette of a woman with the words "High Traffic Corner". Nearby homeowners got pretty upset about it and eventually complained enough for the problem to be picked up by both Philly Mag and Curbed Philly. I could see their concern-- we're trying to class up this neighborhood a bit, and the implications of the image in that sign, whether intentional or not, wasn't gonna do that.

Eventually, the landlord placed some black bars over the tits and ass of the silhouette woman, but later took down the sign altogether. Now, I know that folks don't like the building owners, the Yelson Group, very much, but I have to be fair and say that they do maintain some good spaces (Vetri), despite their, shall we say, mixed reviews. The reason I'll give them at least a little bit of credit that is the fact they pay their taxes, put their real names on their properties, and don't hide amongst their lessees.
What am I talking about? I happen to know that Washington Square West, like many other neighborhoods in the city, is rife with slumlords. A lot of them are old heads that were the first pioneers into the neighborhood and bought up properties for next to nothing. Many of them converted buildings into apartments 30 years ago and haven't touched them since, paying crooked do-nothing management companies to run them with expired rental licenses and L & I violations up the wazoo. They own the buildings using goofy LLC names with addresses that lead to nowhere.
Many still live in the neighborhood while some have had the audacity to build themselves custom multi-million-dollar houses in Jersey and Florida while still showing up to Wash West Civic meetings to yell at everyone about how they're a long time resident of the neighborhood so you'd better fucking listen to anything they have to say. The Yelsons don't come close to this level of shitbagiousness, so as much as people may give them flack, there are much worse building owners in the same hood doing much worse things.
Anyway, you want to rent 1200 South Street? Well, you can't (at least right now). Despite all those signs you see in the picture above, the listing for this spot was just pulled. When I first found this out, I got excited, thinking maybe someone leased the space. Jonathan Tori of Addison Real Estate, the company on the "LEASE" signs informed me that it has been "taken off the market". Here's their video of the space, complete with somber music:


Now that you've seen it, I urge you to consider renting this property, somehow.. (contacting the Yelson Group would probably be the first step). This is an 850-875 square foot floor space complete with basement storage, a bunch of usable kitchen equipment, and an employee shitter. The corner gets moderately brisk foot traffic during the day and shitloads of it at night. Thousands of people live in the surrounding blocks nearby, many of them with tons of disposable income to throw around. This spot would do well as a coffee shop, restaurant, take-out, or even a chain store.
Ok, so the space needs some work. Good! Tear the shit out of it and make it your own! The last tenant stayed for 21 goddamn years! Its latest price was $2500/month, much reduced from its original 2011 price. How bad could it be? Not interested? I got another for ya... 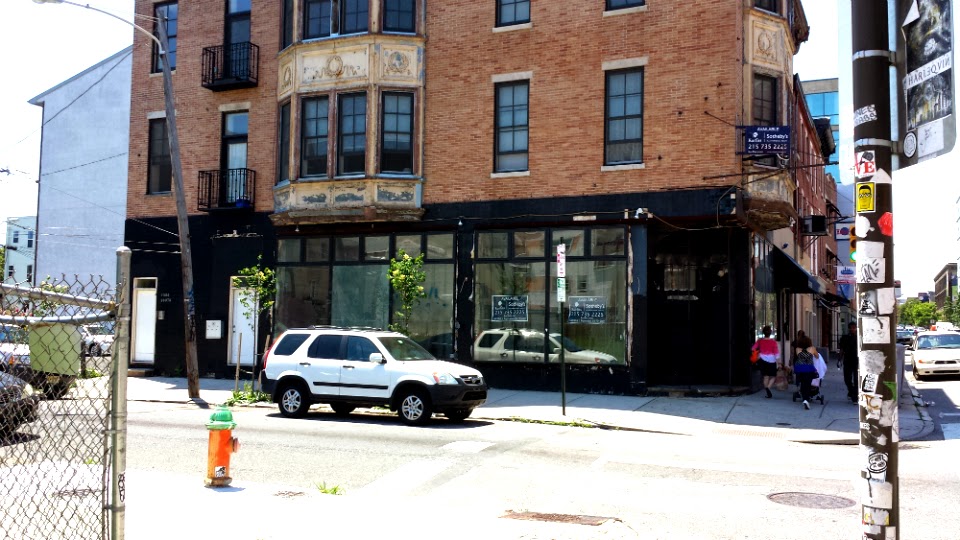 This 2,000 square foot retail space has been empty for about 8 years, which is pitiful considering the fact that it was filled pretty much continuously between 1916 and 2006. Its first tenant was the Acme Tea Company, where it was just one of the many many locations this chain had in the city in the early 20th Century.

Later on, it became Dr. Isadore LeBlang's optometrist office and by 1935 was combined with 1302 to become a bar and restaurant. After a long string of barstaurants, at the end of the 1960s it became Masjid Muhammed of Philadelphia, a mosque. They moved out by the late 1980s and the space went back to being a doctor's office for a short period of time. In 1988, the location became South Street Tattoo and stuck around until 2000, only to be replaced by another tattoo shop, Fat's Tat's, until 2006, when the current owners of the building bought the place.
The new owners spruced up the building, renovating the upper floors and expanding the windows in the retail space.

The retail space went up for lease in July 2009 and has been sitting empty since. Unfortunately, it didn't take very long before the place's exterior got all vandalized. Perhaps the place would be easier to lease if it wasn't all fucked-up looking.

The interior doesn't look so great either. It seems like whoever was working on sprucing-up this space stopped halfway through. How the fuck do they expect to lease this shit for $4,995/month while presenting it in this condition? According to the signs in the windows, the space is offered through Kurfiss-Sotheby. Here's the listing, though there's no photo included. The space comes with a brand new accessible bathroom and brand new dual-zoned heating/AC. All it needs is a hero to come along and make it nice again.
The reason I bring up these two empty storefronts despite there being plenty others on their blocks is because there are big changes coming all around. The empty lot across from 1300 South is getting a new development with even more new retail.

We can't have empty shit on two prominent corners with this kind of stuff about to be built. Its bad enough that Harry's Occult, next door to his new shit, is empty now. On top of that, Dranoff's Southstar Lofts down the block has managed to pick up a new Sbraga, Big Gay Ice Cream, and an un-named gourmet pizza place in like 5 minutes. Therefore, there are definitely some big players that are into this area. Its not like no one's interested.
The potential is there. The people are there. This part of South Street's day has come. FILL THESE FRONTS!!

This is one hell of a church, both for what it did in the past and for what it does today. Read all about it at the Hidden City Daily! Also, we've added a second tour date (July 12th) for my Forgotten Broad Street Tour!! Sign up now!!
Posted by GroJLart at 12:31 PM 1 comments