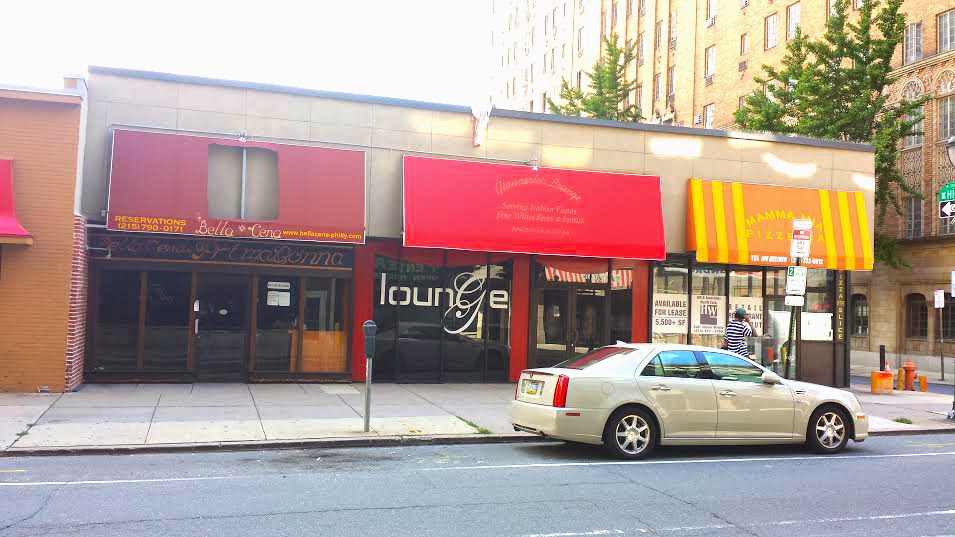 
Really, it seems that the last 10 years or so have shown the most flux with these fronts... they seem to change constantly. The last three occupants were Bella Cena (closed a year ago), Giancarlo's Lounge (closed over 2 years ago), and Mamma Mia Pizzeria (closed nearly 2 years ago). Its time to get these fuckers filled again.
The advantages of these spaces are numerous. Now that all three are empty, they can be combined into a gigantic 11,000 square foot space with over 50 feet of window frontage. Otherwise, take one of the three spaces. Space 1, the easternmost space, expands into the back of the middle space and is the largest of the three at 5,514 square feet. The whole thing is set 16 feet back on the sidewalk, which in 1977 didn't mean shit but nowadays means that you can throw up some outdoor seating with no problems.
This location is the bee's knee's and squall's balls. Tons of foot traffic from the pharmacy, theater, bars, and other food service spots nearby. There's a huge parking garage across the street for your potential customers. The spaces are only one block away from the Broad Street Line and a short walk from the Market Frankford Line.
The place is owned and managed by the Howard Winig Associates Realty Corporation. You can find its listing here on Loopnet. FILL THESE FRONTS!!!
Posted by GroJLart at 8:00 AM 0 comments

Goddamn, what a disgrace. This doo-doo brown-bricked dungeon of dick cheese has been fucking this corner up for the last 42 years and will probably continue to do so for 42 more. Its short, boring-ass design is of course indicative of its time period, when there was an attitude that ugly brown brick boxes were the wave of the future. This is the fugliest of all Philadelphia's television studios, and that's saying something considering that channel 17 runs out of a goddamn converted supermarket!
Though we all know this building as the Fox 29 Studios, it actually has its own name: the Royal-Globe Building, one of many with the same name around the country and definitely the ugliest. Its starts like this: on December 31st, 1963, the Philadelphia Redevelopment Authority created something called the Independence Mall Urban Renewal Area Covenant, a 50-year promise to help develop the areas around the recently-completed Independence National Historic Grass Lot Collection look less like ass. This area, 4th and Market, was designated "Unit #3", where the plan was to mow down all the cool-ass old buildings at the corner and replace them with some of the most boring and ugly pieces of architectural trash the city would ever see.
After years of inactivity, some development finally started to happen. The Federal Government built garbage-ass 400 Market by 1970, spurring interest from private developers to get involved. On June 16th, 1971, the RDA made available a $3 million construction loan to the Richard I. Rubin Company for the creation of a 4-story speculative office building that would stand at the southeast corner of 4th and Market.
Once Rubin was able to pin down the Royal-Globe Insurance Company's Philadelphia office as an anchor tenant, demolition of the corner began. The Market Street side of the site consisted of only two buildings-- a one-story 1950s-built retail structure that looked like shit and the butt-ass awesome Mutual Trust Company Bank which had just been fully restored 11 years earlier.


Construction of the 83,976 square foot shit-brick ass pile went very quickly. The building was complete by early 1972. The design was by the shitty and short-lived firm of Stanford G. Brooks and Associates. Royal-Globe moved 800 employees into the building, doubling the number in their previous office. Another tenant to take up a small space in the new place would be a cruddy 7-year-old low-power television station called WTAF, broadcasting on channel 29 from this location (well really from a tower in Roxborough) starting on November 30th, 1972.
Royal-Globe would eventually take ownership of the building but reduced the space they used over the years, leasing offices to a whole shitload of other firms. Once WTAF became a Fox affiliate in 1986, they went about taking up more space in the building so that they could produce their own original news programming. In 1995 as WTXF (changed in 1988) they took up even more space when Fox bought the station (which is a long story in itself) and did a major overhaul of the building. Even at this point, what was left of Royal-Globe still owned the building and there were still some offices of other companies inside.
Finally, in 2005, Fox 29 took over the whole building and did a mega-renovation that included the ground floor studio with a window on 4th and Market corner, which unfortunately looks out upon later shitty buildings that were the result of the same RDA plan. In 2006, the building sold for 4.7 million to its current owners, something called Jober Holdings.
Though the building is as ugly as sin, it does have one of the city's greatest treasures: Good Day Philadelphia. I know it sounds corny, but I almost can't picture this city without it. This program has been running since 1996 and contributes heavily to the 42.5 hours of news that is filmed in the butt-fugly Royal-Globe Building every week. That Mike Jerrick guy is fucking hilarious and who doesn't love Steve Keeley ?
So it pisses me off even more that the Royal-Globe Building has to be so goddamn atrocious-looking... awesome-ass Good Day Philadelphia is stuck in one of the city's worst-looking buildings, facing a bunch of other butt-fuglies from the same era. I like that the station didn't fuck off to City Line Avenue like some of the others, but if they're going to stay in Center City and show a street corner in the background of their broadcasts, they need to move somewhere that has a nicer view... which is pretty much anywhere in Center City than here. Harumph!