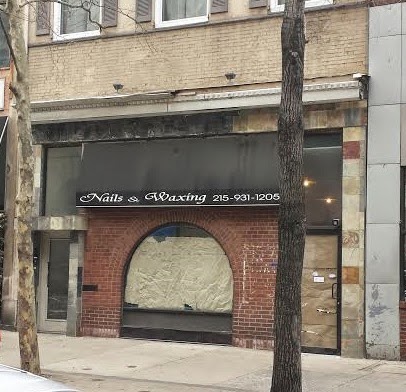 Jesus, what trash. I know its an old folk's castle but still... what the hell did these seniors do to deserve a fate like this? Did you even take a dump that was all painful and difficult and then you look back at the bowl and your dookie is a weird color? That's the color of this building.
The origin of this thing goes all the way back to 1976, when lots of buildings were being proposed in this area as a part of the failed Franklintown revitalization project. An old folk's apartment building was planned on what was then a thin parking lot at 1818-1820 Spring Garden Street. Back then, this was no where you wanted to be. Old abandoned industrial shit filled many blocks to the south and east while a dying neighborhood stretched out to the north.
The architect was the crappy firm of Nowicki & Polillo, whose other works include such butt-fuglies as Academy House, 1845 Walnut, the Gateway Building, and the Archdiocese Office Building. Have you ever met anyone who thought those buildings looked good? No? OF COURSE NOT!!! Then, once it opened in 1978, they called it "Spring Garden Towers". TowerS!?! ARRGGHHH!! Why the fuck do they ever name single buildings with a plural!?!?! Museum Towers next door does the same fucking thing, but at least the second one is just about to be built.
Another thing that pisses me off about this building is that it does the same shit like 1635 Market where the front of the building is just a blank wall with a column of windows in the middle. Its easier to see from the back:

What an embarrassment. Get this: not only is it filled with NIMBYS, its NIMBY-hood was guaranteed as part of its construction! When all the Franklintown shit was happening back in the 1970s, the Lutheran Associates who developed this place were able to secure the air rights of 1822 Spring Garden, the little building next door. Of course, no one told Jon Federman of Nette Properties this in 2004 when he bought the place for $1.8 Mil with the intention of putting up a 40-story condo there.

Though this building was probably pipe dream to begin with, the Spring Garden CDC NIMBYS went fucking bananas and the residents of Spring Garden Towers lost their shit as well. By the end of 2006, approvals supposedly went through for this monster but lawyers and shit got involved after that... then the economy tanked so it never happened.
Nowadays, the new Museum Towers II complex is about to be built to the south of this thing and it seems like Forest City, the developer, doesn't want to even try to fuck with Spring Garden Towers so the section of the property directly south of this crap tower has short townhouses that are hiding a short parking garage. Whatever... at least the parking lot will be gone.

Posted by GroJLart at 7:29 AM 3 comments