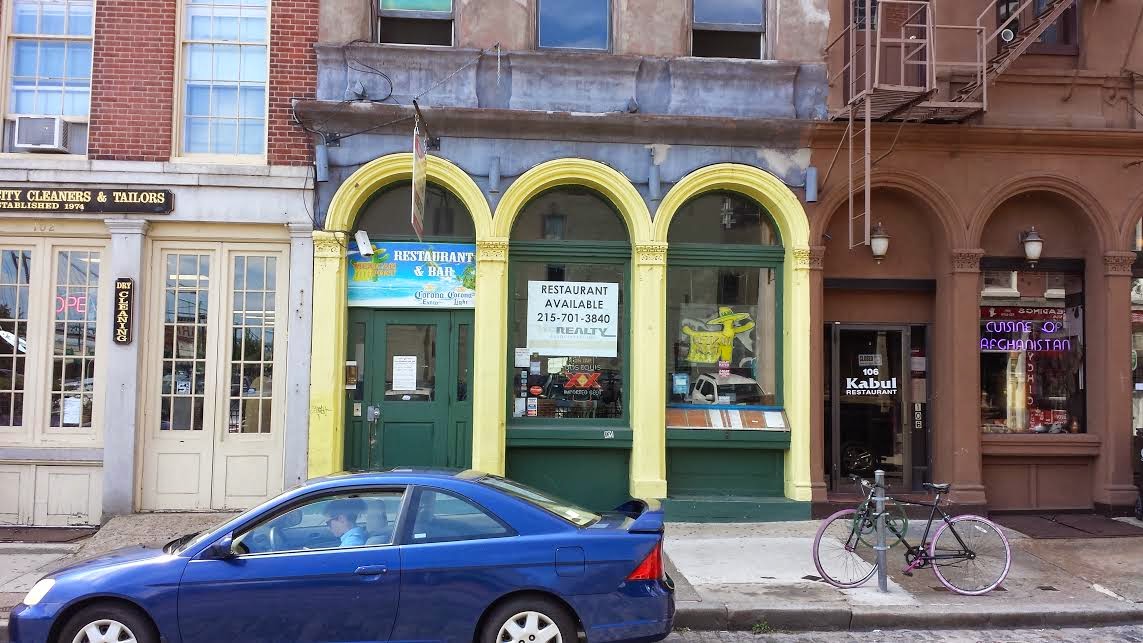 I hate it when a storefront that was filled for decades+ loses its occupant and ends up empty for a long period of time. This is the situation with the old Mexican Post on the 100 block of Chestnut Street. That bitch-bastard held on to this place for 24 and a half years before calling it quits. Now's the time to fill this place back up with... I don't know, something.
This storefront, being in Old City, is pretty old. Going through all the iterations of this storefront over the decades would make this article reach the Orias System. The last time I started a Fill This Front about a building this old it ended up becoming in a Hidden City story. Therefore, I'll just go over its fairly recent history. In the 1950s, it did time as part of Old City's old role of being a wholesale goods district.

By the end of the 1970s, it had become a bar called the Penny Pot Tavern, referencing a place with the same name from the 17th and 18th goddamn Centuries.

A place called Louie Linguini took the spot after that and then, on May 15th, 1989, the space became Mexican Post. At the time, Old City was in the midst of a massive revitalization as a bar and restaurant nexus. Mexican Post was a welcome addition at the time, staying open late to accommodate the drunks. The lunchtime crowd of tourists/nearby office workers and the late night partiers would provide enough traffic to keep the place open for 24 and a half goddamn years. The owner also managed to open other Mexican Posts in Wilmington, the burbs, at a big-ass location on the Parkway, and evenin the food court at the Comcast Center.
Unexpectedly, in November of 2013, the Old City and Parkway locations both closed. The owner told the Insider "he has lost confidence in the city's restaurant climate" and that "

Old City in particular is wiped out". Yeah, right. The restaurant climate in Philly is so badass right now that you can't walk out of your front door without getting slapped in the face with a vegan chili-flavored goose knuckle sandwich on a hand-rolled quinoa-spelt flour bun. What the fuck was the guy so bitter about? Even the most successful restaurants last an average of five years, he got nearly 25 out of this one! Old City in particular is wiped out? Tell that to Han Dynasty and High Street on Market.
Well, the place has been up for lease since last December and after 10 months is still empty. Let's bring it back. This is a 1,500 square foot space. This street has tons of foot traffic-- during the day by tourists and nearby office workers and at night by drunken revelers who won't even notice when you jack up the price after 10pm. This location is very accessible to public transportation, located on a whole mess of bus lines and close to an El stop. There are numerous hotels nearby as well, one on the storefront's very block.
The space is leasing for $6495 a month and is handled by US Realty of Ardmore, PA. Here's the listing. You do this place right and you can't lose. FILL THIS FRONT!!
Posted by GroJLart at 7:55 AM 0 comments

I've avoided talking about this piece of shit right here for two reasons: 1) There isn't much to say about it 2) Its so fucking ugly I actually feel bad for it. Worst of all, in its time, it was considered the bee's fucking knees.  Penn Center House, from 1959, was following a big trend in Philadephia, the co-op. The 2101 Cooperative Apartment Building was the first, built in 1953, and the trend continued throughout the 1950s and early 60s.
The shitty design is from mid-century blahchitect George S. Idell, whose other fuck-ups include the 2101 Cooperative Apartment Building (whose own website does not show any exterior photos of the building due to its nastiness), the Ambassador Towne House (now called Riverwest Condominiums), the Rittenhouse Claridge, the Rittenhouse Savoy, and a third Rittenhouse Square apartment building that was thankfully never built. Though all those buildings are also cocky doo doo designs, Penn Center House really takes the cake. Here's his original rendering, which is actually a little more interesting than the real thing.
You'd think his guy would know better. He was pretty old by the time he designed this shit-- he studied under such badasses as Paul Phillipe Cret and worked with Wilson Brothers at one point. This dude knew what good shit was and even helped design some of it in the early 20th Century. When the mid-20th Century rolled around, Idell must have lost most of his eyesight or something. His buildings from that era almost look like he couldn't see the paper so he just kept tracing his t-square until he got a grid of windows and said "Whatever, good enough. Facade details? Get the fuck out of here!"
This disaster of a building has the Penn Center-era massing-- that is to say the block-long, too-short, grid of bricks and windows. For some reason, the architecture and planning geniuses of the Penn Center era thought what we now call JFK Boulevard should have a building on every block matching the size and shape of Suburban Station... but without the awesome facade. This ends up creating a long boulevard of rectangular walls that create a really shitty urban environment. This one's a little shorter than the others but from the street it makes no difference. Thankfully, one of these wall-buildings, the old Sheraton Penn Center Hotel, was demolished (to make way for a building that was never built called 1777 JFK), so the trend gets broken up by the setback of the Comcast Center.
Penn Center House's street level doesn't do shit other than display a mid-centuryesque decorative cinderblock grille pattern. Behind that grille pattern is a big-ass parking lot that's visible if you look in one of the holes. Walking down the south side of the 1900 block of JFK Boulevard is difficult-- the building just keeps going and going and going like some fucked up architectural purgatory. It makes the Kennedy House and Sterling seem like exciting dynamic buildings in comparison. Its hard to photograph this building unless you have a badass camera with a lens wide enough to get it all in. In order to properly capture how shitty this thing looks from the street, here's a fully functional streetview. Look around on this and tell me that Penn Center House does any damn good on this block:

What trash... there's really nothing else to say. This building could probably be saved if it got a huge facade redo and some better street-level shit... but it would have to be one helluva design. Oh well, we're stuck with it. Fuck.
Posted by GroJLart at 7:37 AM 0 comments