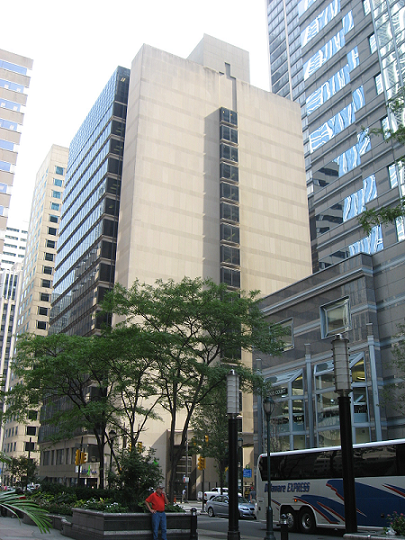 In the very first Philaphilia article, I talked about the Jayne Building... one of Philadelphia's lost landmarks and all-around shit-kicking super-building. Well the guy who made that crazy-ass building possible also had a big fucking mansion taller than the cool-ass building that currently sits on its site.
Dr. David Jayne was about as badass as badass motherfuckers are capable of being. Born in rural Pennsylvania from a long line of clergymen, Jayne broke the family tradition by entering Medical Department of the University of Pennsylvania. This was a pretty big deal considering the guy might not of ever went to school as a kid. Supposedly, he was only taught by a tutor and only in his teen years. Not bad, Jayney.
Once he became a doctor, Jayne practiced in southern NJ. About six years in, he started concocting his own medicines capable of curing pretty much anything. Back then, you didn't have to prove shit to say a medicine worked. You could poor your own piss into a bottle, mix it with vegetable oil, and call it Uncle GroJLart's Golden Cure-All. According to history, you would then become a rich-ass motherfucker.
That's exactly what happened to Jayne. He came up with all kinds of chemicals and called them goofy-ass names like Carminative Balsam and Tonic Vermifuge. That's not a joke-- those are the real names of his medicines. He sold so many of these things so fucking fast that he had to open a store in Philadelphia just to keep his South Jersey town from becoming mobbed with snake oil customers from all over the region.

Jayne's Philadelphia success grew so fast that he was forced to move from larger building to larger building until there was no commercial building in the city large enough to hold him. That's what made the Jayne Building possible. Note that he went from dinky storefront drugstore to largest commercial building in America (briefly) in only THREE YEARS. I told you this guy was a badass.
After his big-ass building was constructed, Jayne allowed his son and nephew to run the drug business (and fail miserably) while he focused on real estate development. That's right, Dr. Jayne was also a slimy-ass Philly developer. Jayne's developments were usually marble or granite commercial buildings that dotted Old City, most notably Philadelphia's mid-19th Century Post Office. Pretty much all of them are gone now.
When Jayne was ready to retire, he decided to build a fancy-ass mansion for himself at 19th and Chestnut, at the time a brand-new rich-ass neighborhood where Philadelphia's elite were building big fucking houses for themselves. Jayne was so powerful at this point that he was able to get the city to eminent domain a bunch of adjacent properties for him so that he could reserve the land to build a massive-ass house. He found a spunky young architect named James McArthur Jr. and commissioned a grand house the likes of which no Philadelphian had ever seen.
McArthur came back with a mansard-roofed mega-castle of imperial cocksmacks, meant to stand at 19th and Chestnut FOREVER. The marble was shipped in all the way from Massachusetts and was special as fuck. People called the house the "Marble Mansion". The motherfucker took so long to build that Dr. Jayne died before it was complete. McArthur would go on to design a little-known building called Philadelphia City Hall.
Jayne's spoiled-ass descendents lived in the house after that for the next three decades. Dr. Jayne's son Horace would go on to build his own mansion, this time designed by Furness, a few blocks away. It still stands.
By the 1910's or so, the mansion was considered an out-dated looking piece of shit. The particular kind of marble used for the facade was considered quite weak (it was rejected as a facade material for City Hall), and was dirty, cracked up, and falling apart. The mansion finally went up for its final sale in 1921, about to fall the fuck over.

The site was considered perfect for a theater. The property was first offered to Oscar Hammerstein with hopes that he would build a new opera house. Hammerstein made a point of telling the New York Times that had had enough of Philadelphia real estate and that his answer was a big "FUCK NO!" The mansion was then purchased by some dudes named Fred D. and M.E. Felt, who built a pretty cool-ass movie theater there that now pitifully serves as a CVS/Pharmacy. They named it after the Aldine Hotel nearby. (Thanks to Philaphile Howard B. Hass for the correction)
Jayne's Mansion was considered quite the Rittenhouse landmark for its entire 55 year existence. The building that replaced it may be pretty cool, but there's plenty of other corners it could have been built. If the Mansion was never sold, it is likely that it would have been preserved by neglect (a la Society Hill) and still be standing today. It would be a great reminder of the lost gigantic mansions that dwarfed the already gigantic houses found in this area. Though a handful of the others survive, none come close to the badassery of this thing. Bollocks.

Lot of Lots of Lost Uses

Northwest corner of 23rd and Walnut 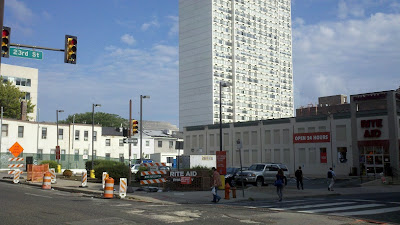 Does this count as an Empty Lot? Its an active surface parking lot for a 24-hour Rite Aid. Well, of course it does. This dense and well-used part of the city shouldn't have a crappy pharmacy's surface lot occupying valuable-ass land like this.
Read more later today at the Philadelphia Citypaper's Naked City Blog!
Posted by GroJLart at 10:31 AM 0 comments 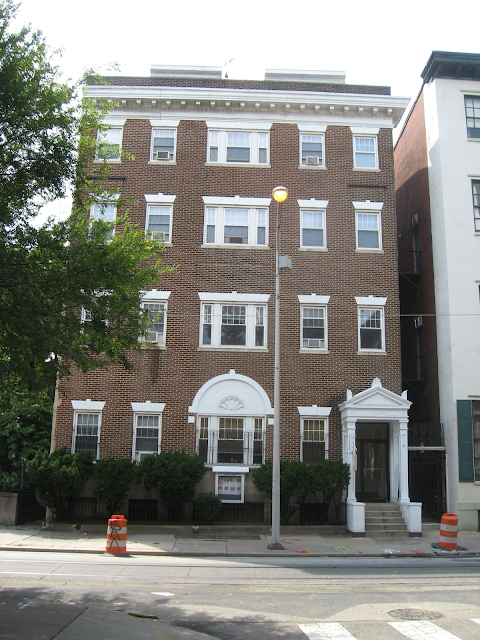 This seemingly normal apartment building in the heart of Washington West proves that in this city, history can be found almost everywhere you look. A remnant from the Reconstruction Period, this is yet another building whose history is nearly forgotten.. until now!
Read more later today at the Hidden City Daily!
Posted by GroJLart at 10:00 AM 0 comments