Hey, that's not William Penn's house! Its the perpetual answer to "What the fuck is that ugly building behind the 1900 block of Chestnut Street?" The William Penn House is from the age of the butt-fugly housing co-ops. This one, however, is special. Its so ugly that it was intentionally hidden behind two major streets so no one would really have to look at it.
This Natural NIMBY Nest consists of a giant beige-colored 60's college dorm-looking wall of trash stuck between Ranstead and Ludlow Streets at the 1900 block. It lists its address at 1919 Chestnut because it has a crappy little covered sidewalk that runs all the way out to Chestnut Street so that no one has to see it that isn't looking for it. The problem is, the residents of the building have made sure that no other building nearby be tall enough to fully obscure this shitsnack from view.

Back in the days when the boxes of Penn Center were thought to be the height of architecture and design, housing co-ops were also all the rage. Though quite common in some other cities, Philadelphia only has about 10. In the early 1960's, when Penn Center was already pretty established, the city encouraged employees working at Penn Center to move into Center City. Most of Center City's housing stock at the time was considered old fashioned and unsafe. Even the few highrise apartment buildings still going strong  weren't modern enough for middle-class suburbanites to want to move into, and the few new ones (the Savoy and the Claridge) were too expensive.
This problem was the direct cause of some of the worst buildings the city has ever seen-- the Sterling, Kennedy House, Penn Center House, and this, William Penn House. It all started with Frank M. Steinberg and Efriam J. Frankel. They had the same idea everyone else was having at the time--- middle-class housing in Center City for employees at Penn Center. In fact, this would be the third such building built for this purpose in a space of only a few years.
They purchased a plot of land that was barely accessible and set up model apartments in the Strawbridge and Clothier. The big selling point was that the units would be "all electric". What the fuck does that mean? Was the shower electric? Who the fuck prefers an electric stove to a gas one? The other selling point was the view. From that vantage point, residents would be able to look upon City Hall and the Art Museum without encumbrance.
Strangely enough, despite the sorry state of the neighborhood at the time (an assload of abandoned buildings and many empty lots), the units sold like hotcakes. Construction began on this atrocity in the Spring of 1964 and people started moving in around October 1965. Those great views that were a huge selling point of the place started getting obscured only 2 years later when the butt-fugly IVB Building was built. That shitty piece of construction didn't just ruin William Penn House's view of William Penn, but created NIMBYs out of normal red-blooded Amuricans. Every other project that would be built nearby fell under their scrutiny, causing long periods of time that the place would be in view of horrible empty lots.

While some of the empty spaces eventually got filled with tall buildings, the lot directly behind the shitbox was especially effected. This was a lot that faced Market Street, so logic dictates that a tall building would eventually have to go there. Proposal after proposal came along that was squashed with Kryptonite-infused NIMBY superpowers. Even the goofy master plans of the age (like the Century 21 Complex) ignored the plot behind the Willam Penn House in fear of its wrath. Many of these dead-ass proposals are lost to the ages, but one was a Hyatt Regency Hotel. By the late 1970's, the lot had been completely cleared of abandoned buildings (which included the Stanley Theatre) and was itching for development, but the NIMBY firestorm kept most away.

Finally, after years of NIMBY domination, a group came along with so much power that they were unafraid of proposing a tall building for 19th and Market: the Philadelphia Stock Exchange. They were extremely motivated to get out of their own butt-fugly building and build a new and modern financial mega-center that would outdo the crappy one they were renting since 1966. They proposed a tall building in the late 1970's that would overshadow the crappy William Penn House forever.
The NIMBYs foamed at the mouth and pulled out all their tricks to delay the project into dead-ass status. They got politicians involved and demanded an archeological dig. The Stock Exchange was trying to beat the clock (their lease at the old building was almost up), so they played along. In the end, what was to be a massive 400-500 foot skyscraper became a shitty 8-storey box that got built in 1981. Thanks, assholes.

The next time you're on the 1900 block of Chestnut, pay your respects to the Boyd, mourn the lost Aldine Hotel, and take a big shit in your hand and see if you can reach the William Penn House in one throw.

Posted by GroJLart at 6:42 AM 3 comments

Check that tall motherfucker out... the fun thing about it is that the building isn't really that tall! It was thin and surrounded by smaller structures, giving it a sense of being purely monolithic. Most people, however, would barely ever see it from the front. Almost everyone who has ever seen this building only knows it from the humongously wide brick wall on the Eastern side.

This is the kind of building that doesn't mind letting you know what its name is and takes it to the extreme. The huge wall was emblazoned with giant lettering that said "FIDELITY STORAGE" with and extra "STORAGE" thrown in vertically just in case. It was written on the other side as well, but not as big.
Back in the late 19th Century, Fidelity Storage was a nationwide company that would franchise storage locations like McDonald's restaurants. In the mid-1880's, they got some dude named A.C. Craig, Jr. to invest with some of his buddies into a Philadelphia Fidelity Storage location. The company was incorporated on April 12, 1887. They built a six story warehouse at 1817 Market and had another warehouse at 50 N. Delaware Avenue.
Business was very good... Fidelity Storage didn't just store your shit... they would pick it up, pack it, and deliver it to the building. When you wanted your shit back, they would deliver it and unpack it for you. It was more like a bank for furniture than a self-storage place. By the mid 1890's, they were ready to expand.. but the plot of land they owned only had thirty-four feet of Market Street frontage left on it. What's could they do? Go up!!
In 1895, plans were put together by architect Charles Balderston for a 12-story fire and burglar-proof fortress that would fit into the 34' x 180' foot space left on the Fidelity property. He would give it a kick-ass terra cotta facade filled with tiny details.

Once built, it became known as the Fidelity Storage Fireproof Building. It was billed as the tallest and only fireproof storage building in the city. Thirty years later, in 1922, a 17' x 180' addition was thrown on the Eastern side and the massive FIDELITY STORAGE lettering was completely redone on the new Eastern wall. The addition, though small, added 50% more storage space, or at least that's what they claimed. One year after the addition was completed, a fire took down the smaller Western portion of the building and the Fidelity Storage Fireproof Building lived on as the main Fidelity Storage building. It would carry the scars from the fire on its Western wall for the rest of its life.
After that, the building languished on for decades, at this point dirtied up from the Chinese Wall behind it... but strangely found a way to survive. When the Chinese Wall was taken down, many of the buildings next to it were as well. Somehow, Fidelity Storage managed to stay standing. Even as Penn Center was later built and kept creeping westward, Fidelity Storage lived on.

In fact, the Fidelity Storage and Warehouse Company Fireproof Building made it all the way up to 1976. That's pretty fucking astounding when you consider that pretty much every block around it had changed up to that point. After demolition, the site was an empty lot for five whole years until the extremely boring-looking 10 Penn Center was built.

What a shame. Such a thin building could have been incorporated or built around the tall skyscrapers that replaced it. It would be a cool thing to have around today, a crazy terra cotta facade in between glass-walled skyscrapers. At least a similarly-sized building as this still stands at the 1300 block of Chestnut (the Cunningham Piano Building/Scientology Tower) and at least there's plenty of old storage buildings left around town that have gigantic lettering on their sides, but they're not nearly as impressive as this beast. Donkey nuts.

Posted by GroJLart at 6:39 AM 3 comments 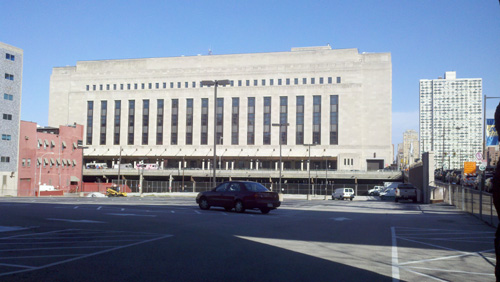 This lot is ridiculous. An immense asphalt desert that sinks under the IRS/old Post Office building. Even as new buildings and other developments have occurred all around, this Sunken Ocean of Assholes has managed to stay completely empty and decrepit for over a decade. Will this lot soon be dead? Good fuckin' luck.
Read more  on the Philadelphia Citypaper's Naked City Blog!
Posted by GroJLart at 6:44 AM 0 comments 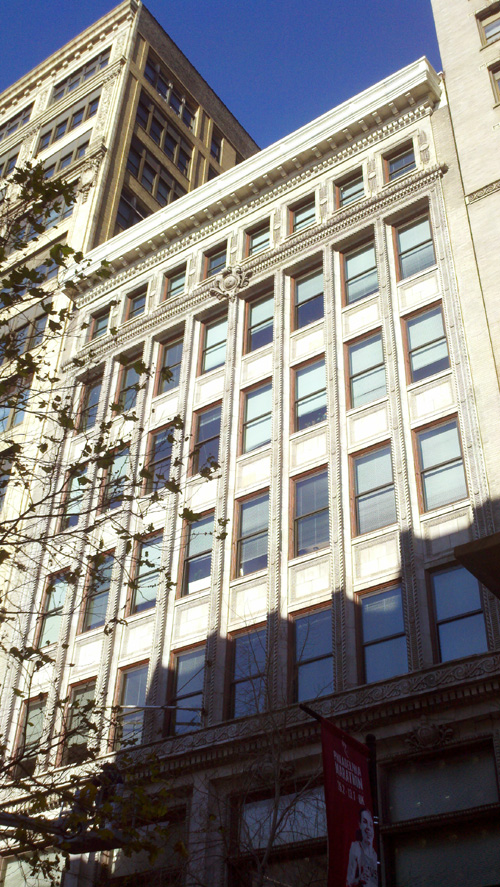 Out on Chestnut East, the forlorn retail and commercial row that was once one of the most premiere shopping destinations in the region still holds on to a number of treasures. Snuggled between two taller buildings on the 1201 block stands a nice little building that gets very little recognition. 1207-09 Chestnut Street has had many different lives and will one day reign again.
Read more at Hidden City Philadelphia!
Posted by GroJLart at 6:40 AM 0 comments