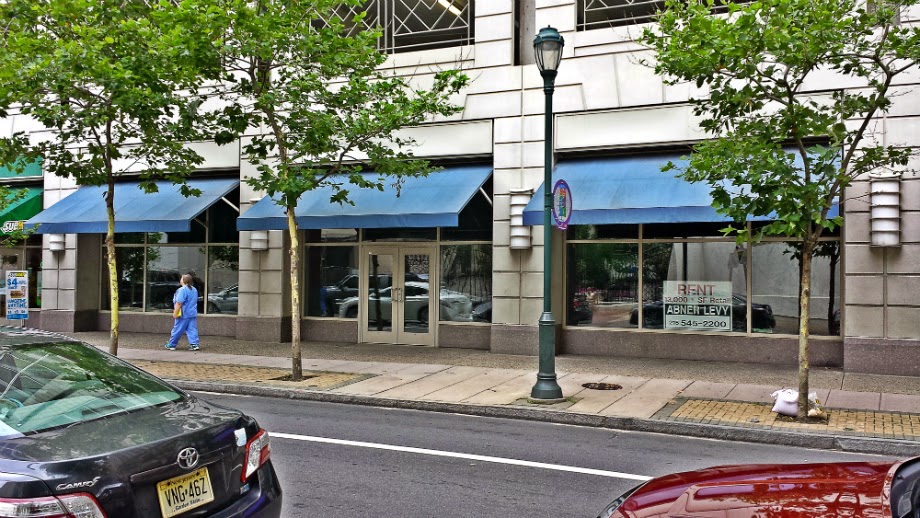 What the fuck? How is it after all these years, this storefront on Jefferson's garage on the 900 block of Chestnut has sit unused and unchanged ever since this garage was built? The other fronts in the garage have been filled just fine... what the hell is wrong with this space that it can't find a friend?
This garage has been a problem since the day it was proposed. After failing to build a garage at 11th and Locust at the turn of the 21st Century, Jefferson set their goals on the 900 block of Chestnut, which was full of ancient commercial buildings that were getting bought up by both Jeff and a Chicago-based company named Urban Growth. When Jefferson and Interpark got together on building the big-ass garage, a giant shitstorm of NIMBYism that delayed the project for three years eventually lead the design to be changed so that the garage would be a little shorter than planned (but still expandable),  have a building-like facade, and not have any car entrances/curbcuts along Chestnut Street.
Eventually the big fucker was built and it came time to fill all the storefronts. Bank of America, Fedex/Kinko's, and Subway quickly filled the spaces, but the 2,700 square foot space at 916 Chestnut stayed empty. For awhile, the sign out front even made a point of saying "One Store Left" on it.

Eight years later, the storefront looks exactly the fucking same. The "One Store Left Sign" is gone but the space still has an old "RENT" sign on it. However, there seems to be nowhere on the internet that has a listing for the space. How the fuck are you supposed to fill a space without it being on the Interslice? Also, the "RENT" sign is a remnant from when none of the stores were filled, offering 13,000 square feet, 10,300 of which is already leased. So is this space available or not?
Well, there may be a little bit of an answer. Though there's no date on it, there is an active permit pulled for the garage that says in part:

"FOR THE ELIMINATION OF EXISTING TENANT SPACE # 910 AT THE GROUND LEVEL AND CREATION OF A CURB CUT ALONG THE CHESTNUT STREET FRONTAGE FOR INGRESS AND EGRESS FROM THE EXISTING PUBLIC PARKING GARAGE."

"EXISTING TAKE-OUT RESTAURANT WITH SEATING IN SPACE #910 TO BE RE-ESTABLISHED IN SPACE # 916 AT THE GROUND FLOOR AND IN THE SAME BUILDING..."

Aha... so is there a plan in place to move the storefront used by Subway (910) and move it into this empty storefront (916)? It would certainly explain how this spot has stayed empty for 8 years. We should at this time recall that part of the contingency made to get the ZBA to approve this garage at all was that it would have no Chestnut Street-facing curbcuts. The same permit also includes a two story heightening of the garage, which was something planned from the beginning. The plot thickens when we think about the fact that Jefferson just purchased the surface lot at the corner of 9th and Chestnut.
If that's what the plan is, Jefferson needs to stop dicking us around and take the "RENT" sign down from the empty space. Jeff's construction plans seem to change from year to year and they seem to make some impulsive property-related decisions from time to time, but I was able to dig up this old 2009 or so rendering of a building for that corner they just bought.

This was labeled as an Ambulatory Care Center, but now they're saying that the old bank they just bought on Walnut/Washington Square will serve that purpose instead. So why did they buy that surface lot? If Jefferson has a master plan right now, they sure as shit aren't sharing it with us. FILL THIS FRONT!
Posted by GroJLart at 8:05 AM 0 comments