Butt-Fugly Building of the Week-- May 3rd

Fuckin' Chestnut East... its one sad motherfucker of a place. The 1100 block is especially sorry-looking... many of the crappy short retail spots used to be much taller beautiful buildings. The butt-fugly building we're talking about today is probably the oldest butt-fugly building I'll ever talk about. Its an example of how crappy alterations can ruin a perfectly good building.
The American Sunday School Union was formed under the name Sunday and Adult School Union in 1817.  It was primarily formed to standardize catechism, manage missionaries, and print publications for religious education. It was a pretty disorganized group until 1845, when they elected managers and officers. The same year, they declared Philadelphia their national headquarters, since good ol' Philly was considered, then as now, to be the best fucking city in the world!
The first headquarters space was in a 10 x 10 room near 4th and Cherry Streets. In 1820, they expanded to 29 North 4th Street. They outgrew that spot by 1825 and moved to 13 North 4th, staying there for 2 years until their massive popularity made them able to purchase 146 Chestnut Street. The ASSU was able to stay there for 20 years but eventually found the quarters too cramped, being that they were printing five times the amount of books by 1845. They knocked their building down and rebuilt a new one by the end of that year.
It didn't help. In 1853, the Union was ready to build again. They purchased a lot in an area considered "the country" at the time, 316 Chestnut Street. That is to say, 316 Chestnut according to the old address number system. The "country" location is now known as 1122 Chestnut Street. That's right... the building we're talking about today is so fucking old that when it was built, the 1100 block of Chestnut was outside of town. They got John McArthur, Jr, the supermegatect that designed City Hall, to design them a Sunday School Castle of Granite Cocksmacks that would be big enough to keep them from having to move FOREVER.
McArthur slapped them with his kryponite dick and gave them a monolith fortress the likes of which no Sunday Schooler had ever seen. Behind a facade of Quincy Granite lay four floors of offices followed by five floors of warehouse that reached all the way back to George (Sansom) Street.


It cost $71,876.18, $1.48 million today, with 54,276.18 donated by Philadelphia citizens. Completed in 1854, the building became a landmark to the religious and helped bring more development to the infant Chestnut East. Its $5,000 ($107k today) grand assembly hall, added in 1878, could be reserved free of charge by groups from any denomination for meetings and banquets. While in this building, the ASSU spread itself all over the world, storing Sunday School books in a shitload of languages. I wonder if they had any Klingon catechism books?
Once the 20th Century came along, the ASSU was outgrowing the building they thought they could never outgrow. They sold it for $325,000 and built a new home at 1816 chestnut street. That's when Benjamin F. Dewees, who had a successful dry goods store next door, started his reign of terror in the old ASSU building. He moved in and later combined 1122 and 1124, ripping the facade off the ASSU and built a new facade that would cover the two buildings. That's right, this ugly motherfucker is a crazy hybrid of two buildings. The ASSU on the left and another historical building on the right, the Robbins and Biddle jewelry company.

Robbins, Biddle, and Company was once the most badass jeweler in the nation and is the oldest jewelry company in America. It's still around, now called Bailey, Banks, and Biddle. At 1124 Chestnut, they made confederate pennies and the mortuary medal for Abe Lincoln's funeral, among other historical shit. They would go on to make even more history, but that was at their newer locations, so who cares?
Shortly after the buildings were combined, the Dewees store gave up on dry goods and focused on women's wear. They enforced strict guidelines on how their salewomen would look and how they were dressed. In the 1910's, they leased some of their empty office space upstairs to various companies, at one point holding the office of mega-architect Andrew J. Sauer. Dewees would stay open all the way up into the 1960's, with other locations in the burbs.

After that, records are spotty. In 1979, something called the Arm Corporation had offices in the building. The storefront changed and changed and changed until the mid 2000's, when House of Beauty II moved in. Ironic that such an ugly building could be called "House of Beauty". In 2006, the building, along with its neighbor to the west, was purchased for $10 million dollars by the now-defunct developer CREI.
Demolition notices went up and the insane Unknot Tower was approved to replace the old ASSU/Robbins Biddle building. Then, in 2008, CREI went to shit and the company that loaned them $16.5 million for the Unknot project, Petra Capital Management, took possession of the butt-ass awful-looking property. Its been sitting there collecting rat shit ever since.
When the fuck will some hero come along and save Chestnut East? Someone needs to take this ugly motherfucker, put it out of its fucking misery, and build something awesome here!!! I know the frames of historical buildings are sitting behind that crappy frontage... but its not like the old facades are gonna be restored. You'll probably never see me say this about such an old building again, but I say DESTROY!! DESTROY!! DESTROY!!!
Posted by GroJLart at 6:36 AM 2 comments

Lost Building of the Week-- May 2nd

This city has so many lost theaters, its a wonder why we ever build new ones. Here's yet another one for the list...a perfectly good theater that got chewed up and spit out by major alterations to the point of becoming a useless pile of trash when it was demolished. The victim of the mid-20th Century shittyness of its neighborhood, this would be a great structure to have around today.
This last Monday, I wrote about the Northwestern National Bank building, which was across the street from this thing. The Park Theater was yet another accoutrement added to the Gilded Age Town Square that was the convergence of Broad, Fairmount, and Ridge Avenues.
As stated in the Northwestern Bank article, this Gilded Age Town Square was created to establish a separate rich neighborhood from the trustafarian-ass old money millionaires by Rittenhouse Square. The newly-rich-ass self-made motherfuckers were rejected by the shiftless inherited-wealth types, and wanted a community with its own cultural and institutional resources. One of the first resources created was this, the Park Theater.
In 1886, the great Gilded Age triple-corner did not yet boast the Lorraine Hotel or the American Trust Loan and Guaranteed Investment Company. The first major piece of architecture to hit the corner would have to be magnificent enough to help spur the growth of this burgeoning 'hood. John Bailey McElfatrick, a great architect that designed some of the nicest theaters in the country, was called in to design a theater that would kick the Academy of Music's ass and crush the Musical Fund Hall's balls.
McElfatrick didn't disappoint. He designed a white brick-facaded Megafortress of Theatrical Mushmeat. It had a cone-shaped tower on one side and a pyramid-shaped tower on the other... sometimes you feel like a nut, sometimes you don't. Completed in 1887, it held over 1,600 seats and made the northeast corner of Broad and Fairmount shine like a motherfucker. A few years later, the American Trust building would go up, and then Willis G. Hale's Lorraine Hotel a few years after that. Elfatrick has another connection to Willis Hale... he designed the Garrick Theater, which was built to appear as an addition to the Hale Building and had a facade, designed by Hale, that matched it.
The theater's awesomeness wouldn't last very long. In 1908, the Metropolitan Opera House a couple of blocks to the north was built, making the Park Theater seem like a shitbag puppet show hut, despite additions and alterations made in 1898, 1901, and 1904. In 1918, John Wanamaker purchased the building and donated it to the Salvation Army. It became the Salvation Army's headquarters and was the home of the organization's Anti-Suicide Club. They named the building Evangeline Hall. I prefer Evangeline Lilly.
By the 1950's, the area had become absolute shit. The Salvation Army was needed in this area more than ever and the old theater building they were using was falling apart. In 1968, the old Park Theater was unceremoniously knocked the fuck down in favor of a newer, sleeker Salvation Army headquarters that looks about as ugly as that time period's architecture gets.

J.B. McElfatrick designed at least 3 other Philadelphia theaters and only one still stands, but its so ridiculously altered that you'd never know it-- its that MJM Trading Inc. "Food Distributor" at 10th and Callowhill. As stated above, this city has a talent for losing theater awesome-looking theater buildings, and we'll probably lose a few more in the next couple of decades. What a fucking shame.

Posted by GroJLart at 6:28 AM 1 comments

Empty Lot of the Week-- May 1st

Wow, this empty lot is completely useless... its not even a parking lot! Situated on a fine part of Market Street, this lot hasn't seen a building in 25 years. It doesn't get much worse than this... a perfectly good piece of land just sitting there collecting party puke and bumshit.
Read more at the Philadelphia Citypaper's Naked City Blog!
Posted by GroJLart at 7:58 AM 0 comments 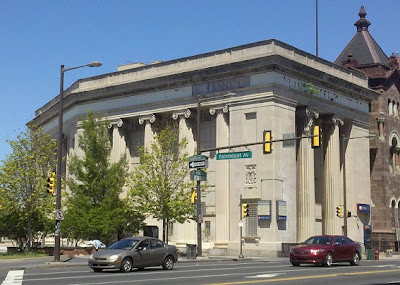 Now here's a rather unique building that gets no respect. The Lusk Building was built at the tail end of North Broad Street's Golden Age and is still being used for its original purpose. Now that North Broad is facing an exponentially expanding renaissance, this regal structure and the corner it lives on will return from decades of neglect.
Read more at Hidden City Philadelphia!
Posted by GroJLart at 6:29 AM 0 comments