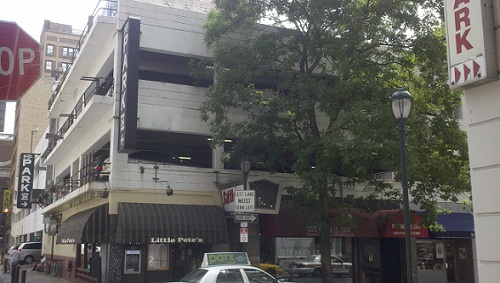 Needless to say, the project never happened. I don't even know if it was a serious proposal or just a fantasy building.
All that is not even the worst part about this piece of shit. The parking garage's current owners, some folks under the name Philadelphia Chancellor Limited Partnership (and with a mailing address at the Radisson Hotel in Trevose, PA) bought the place from the Equity Office Property Trust in December of 2004 for $11,433,240. Whomever this group of people/businesses is (probably something having to do with the Carlson Hotels company who own the Radisson Plaza Warwick Hotel across the street), they owe $559,337.82 in property taxes. They were on the "biggest tax cheats" list back when they owed 200 grand less. Maybe my ninja down at Philadelinquency.com can get on the case.
In short, this garage sucks radioactive monkey nuts through a kryptonite straw. Hopefully someone will come along and put this motherfucker out of its misery-- just demolish the whole thing except Little Pete's.
Posted by GroJLart at 8:34 AM