Philly Reel to Real-- May

I happened upon Trick Baby about 5 years ago while flipping through channels on TV. I had remembered that it was on Wikipedia's list of "Cultural Depictions of Philadelphia", but figured it was filmed in NYC like most of the others. In the first five minutes of the movie I was going nuts trying to figure out if it was Philly or not, when I saw a familiar sight: 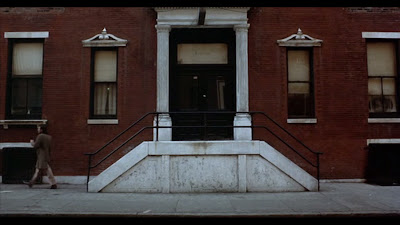 That's the side entrance to the old Colonial Hotel (now condo) at 11th and Spruce. Back then it was a crappy shitbag hotel similar to the Parker-Spruce. Here it is now: 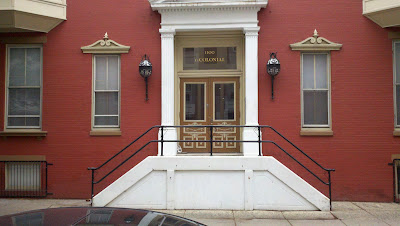 This future Old-ass Building of the Week has an interesting history... but that will have to wait for another time. I remember when I saw the movie, I could see familiar buildings in the background but couldn't figure out what street they were on. Then I remembered that this movie was filmed in 1972-73, shortly before the Gallery was built. Check this shit out:

This was the hardest motherfucker to figure out. City Hall's way in the background but looks like an unfamiliar angle. Ends up Commerce Street used to run all the way to 12th and lead into an entrance for trucks into what is now the Liquor Store at Reading Terminal Market.That's where the characters are standing. Any of you tourists out there get on one of those cheesy buses? This is just south of the pick-up spot. Here's the one that really got me going:

Reading Terminal's headhouse is visible plus the very top of City Hall. Where the fuck could this be? The 1000 block of Filbert, that's where. All those shit-looking storefronts from the early 70's are nicer than giant late 70's-ish blank walls and that ugly fucking Greyhound Bus Terminal. I guess the road to hell IS paved with good intentions. At least it's a little cleaner. Here's another one:


Wow, there were buildings and stuff around, almost like a city. A lot of this shit was demolished for the construction of the CCCC Tunnel Mega-Lot. The crossover bridge for that big fuck parking garage straddling 8th Street is visible in the background... looks like there was improvement made there. Here's one last one:

The 20th street entrance to the Dorchester. At least the storefront at the corner was occupied. Anyway, if you're ever in the mood for spotting some 1972-1973 Philadelphia and trying to figure out what you're seeing, check out Trick Baby. There's tons of spots I wasn't able to identify... a lot of it is up on Ridge Avenue by Bolton Street. It's also fun to watch illogical travels between blocks that are far from each other. A guy runs from the Dorchester to the Italian Market in like 2 seconds. At the beginning of the movie, a guy leaves his hotel at 11th and Spruce, gets in his parked car up by Ridge Ave, and drives to the Dorchester in about 20 seconds.
If you want to see the ultimate Philly Reel to Real, watch this video by James Rolfe called Rocky Jumped a Park Bench.
Posted by GroJLart at 5:34 PM

Email ThisBlogThis!Share to TwitterShare to FacebookShare to Pinterest
Labels: Real to Reel