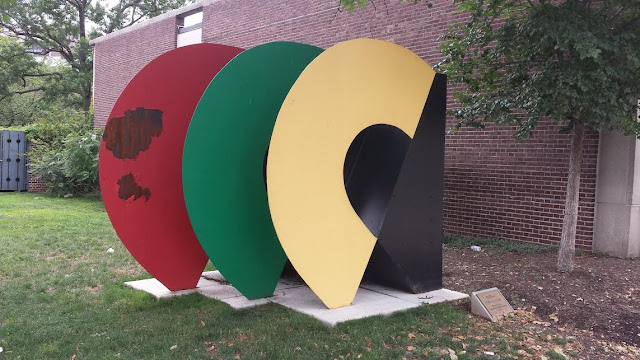 I haven't done one of these in awhile but when I happened upon this tarnished piece of elephant dung I couldn't resist telling you about it. What a piece of trash-- people wonder why art/design/architecture from the 1980s constantly gets derided. Well, this is your answer.
It started in 1982. The Philadelphia Art Alliance had a sculpture show at Rittenhouse Square in order to celebrate the city's 300th birthday. The city was doing pretty shitty at the time but there were signs that things were about to get better-- plans were being put into motion to clean up/rebuild the City Hall clock tower, the One Logan Square/Four Seasons complex was breaking ground, the Hershey Philadelphia Hotel (now Doubletree) Broad and Locust was just finished, and a major motion picture was being filmed in the city.
Sculptor Billie Lawless prepared a submission for the show and I guess he didn't have to think very hard about it because he already designed a sculpture one year earlier called Cockle-Doodle-Doo (now standing at the Buffalo State College campus) that was EXTREMELY similar. He made this 1,200 pound pile of metal dogshit in the shape of 3 half circles, painted them goofy colors, and called it Life Savers because they kind of look like the candy of the same name. I don't know how they got a hold of it, but a year later, art patrons Phillip and Muriel Berman donated it and another sculpture to the University of Pennsylvania.
UPenn put it up right next to the doorway of their veterinary hospital's emergency room, I guess so that when you bring your dying dog in, you can see the sculpture and say to yourself "Well, it sucks that my dog's dead, but at least I didn't make that shitty sculpture!"


Maybe they put it next to the veterinary hospital because it's called Life Savers and lives are saved in there? Anyway, the sculpture sat in the same spot for the next 31 years until, in the latter half of 2014, it was mysteriously moved to the corner of 38th and Spruce along with the plaque from its dedication.
Since the move, a large pockmark has appeared on the red part, which is even more mysterious. Its not there in the Google Streetview at the original location from May 2014:

Whatever. You'd think that if they were gonna move this thing to a location where waaaaay more people were going to see it, they would have restored the motherfucker first. Oh well-- just yet another UPenn public art atrocity. You'd think that all those fancy professors and students over there would try to make this kind of shit better, but it just keeps getting worse. Get on the ball, Penn. Get us some public art that people will actually want to look at once in awhile.