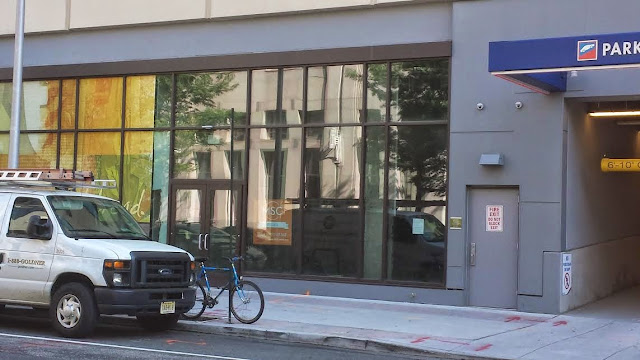 Ok I waited about as long as I could for this one but now I've had about enough. This little hotel, despite being shitty-looking and way too small for its high-profile corner, has managed to be pretty impressive at engaging the street level experience out front-- at least on its 12th st side. As you can see, one little retail space on the Arch Street side is still empty as a motherfucker and doesn't seem to want to change any time soon. Enough of this shit! Let's Fill This Front!
I'd like to tell you a long string of history detailing every occupant this place has had, but I can't simply because there is none! The hotel its in was completed in 2013, an ugly building that will forever stand as a symbol of the recent real estate bust. It stands on a site once targeted for a W Hotel!! It makes one wonder that if we all waited a few years, the new one now being site-prepped at 15th and Chestnut would have been built here instead! Funnily enough, the same architect who designed the new W also designed this place! I should also mention that a massive amount of government cheese was used to fund this little bastard, so enjoy the place-- you paid for it.

When the hotel was complete, the other two retail spots in the building were already leased by Panera Bread and BurgerFi. I know people rag on having chains in Center City but being that this location is in Convention Land, these types of tenants are perfectly appropriate. I've never even been to a Panera Bread but BurgerFi is pretty fucking good. Plus I always appreciate a chain from far away that has only one location anywhere near here... I always tell people how I went to the BurgerFi in Key West because I'd never thought I'd see one again-- only to see them installing the sign on the place when I was in the cab on the way home from the airport.
Anyway, what the fuck is with the last retail space? The other ones seem to be doing just fine-- they are crowded even when there is no convention in town. Nonetheless, this last little space stands empty with no sign of getting better. Therefore it's time to make this place shine.

The space is 1,948 Sq Ft  with a 22 foot frontage on Arch Street and the location is ideal. You're right in the middle of Conventionland near the corner of 12th and Arch streets. Now that the convention center has mostly fixed the bullshit that kept exhibitors from wanting to come here, there's a good chance that the right business plopped into this storefront would do really well. Don't forget that a shitload of potential customers are staying overnight in the floors above.
Even if there was no convention-- this spot is still pretty good. You've got plenty of transit access via an EL/Trolley stop a block away to the south, a BSL stop not too far away, the shitload of buslines that run on Market Street nearby (which includes New Jersey Transit buses), and even Regional Rail access from Jefferson Station! Not enough? What are you, made of stone? Well, you should also know that SEPTA's longest and most heavily used bus line, the 23, passes right by this place. Don't forget the always-crowded Reading Terminal Market is on the next block!
Strangely enough, even if you want this spot, I'm not sure you can have it. The listing for the space went "Off Market" on February 6th, but whomever or whatever has taken this place has yet to do shit to make their presence known. Michael Salove Company was the one marketing it. Hopefully there is a hero out there that has recognized this potential and has found a way to FILL THIS FRONT!!

UPDATE:  I have been informed that the space is leased and that the lessee should be officially revealed fairly soon. Thanks to Jacob Cooper from MSC Retail for the info!