The Athenaeum's Looking Forward: GroJLart Picks His Own Winners (and Losers)

2014 marked the 200th Anniversary of the Athenaeum of Philadelphia, the badass library/resource center/museum housed in a kick-ass 1845-built John Notman-designed building on the east side of Washington Square that was the first brownstone building in the city. I'd go more into what the Athenaeum is, but, if you read this blog regularly, you should already fucking know. However, if you're new to this blog or just a general dumbass, here's all you need.
To celebrate their bicentennial (and because they didn't bother celebrating their own centennial in 1914), the Athenaeum held an architecture contest named "Looking Forward" for both professional firms and students, imagining if the old John Notman building was replaced in 2050. Here's the full fact sheet that lists all the requirements and outlines badass jurors who would pick the final winners.
The Athenaeum received 88 submissions from all around the world, 46 professional and 42 student-made. Bruce Laverty, Gladys Brooks Curator for Architecture, and Michael Seneca, Director of the Athenaeum’s Regional Digital Imaging Center, have been huge boosters of Philaphilia and myself for the last 3 years. They've provided me with access to untold shitloads of information and images and this blog would be pretty boring without them, so thanks.
They've also given me access to all the submissions to Looking Forward, so I have taken it upon myself to choose my own winners and losers for this contest, who of course will receive no prizes besides my mention of them. I'm sure if any of the real jurists read my review of these designs they would puke in their own mouths, but my choices are made nonetheless. To see the real winners of the Looking Forward contest, go down to the Athenaeum of Philadelphia at 219 South 6th Street, where the winners are on display until February 14th.

Ok, so as everyone knows, I don't care much for contemporary urban architecture or what today's firms have been producing. I like the old shit much better... out of all these submissions, the John Notman building still outdoes them all. The professional submissions range from very very detailed and thought-out to basic and barely rendered. Architecture firms are busy places and few even have the time to sit around and commit to fully designing a building that would never exist just to submit to a contest, so I understand why some look like they were farted out onto the paper. Nonetheless, some do stand out as pretty good and really bad.
Note: the submissions are anonymous, I have no idea who the architects were for any of them. However, you can tell which ones have actually been to the site or know anything about the surrounding area. Some of the submissions didn't bother to look at page 6 of the fact sheet, which shows the context of the site:
Therefore, any submission that didn't have the Washington Square side as the primary facade went on my immediate shitlist. With some, however, you could tell its originators knew about the area and even went as far as eliminating the Dilworth House property or acknowledging the poor souls at the St. James houses who have been in perpetual shadow for decades.
There were also some that seemed to think the building was to be placed in the year 2550 instead of 2050, having outlandish-ass technology and other whacky shit involved. Others went way more staid, with the most basic re-do of the building, almost like they just took off the John Notman facade and put a boring contemporary one on. Some are Supertall Skyscrapers, others put the whole thing underground like the never-built Calder Museum. Anyway, enough talk. Here are my professional winners and losers:

I had a hard time picking a winner... again, I'm not a fan of contemporary urban architecture nor am I much into some of the attitudes behind a lot of ideas that get shoe-horned into today's building designs. Of the 46 professional submissions, this was my favorite:

Pretty good. It has all the kind of crap that should be involved with a place like this without going overboard. A thin tower section holding all the library/museum stuff and a shorter section for rentable studios and "collaboration pods" that is topped with an outdoor space. 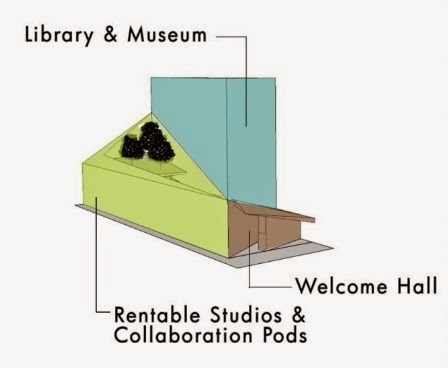 Futuristic without too much whacky shit going on. Doesn't much acknowledge the Randolph Street side, but that's ok, I still enjoy it. This one would really make a great addition to Washington Square. My only two criticisms of this one are the big "Athenaeum" sign and the grey facade of the short section. 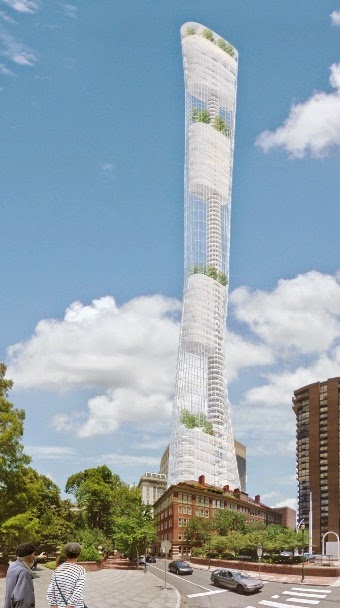 This one gets an Honorable Mention-- out of all the submissions that were skyscrapers, this one was the best looking and had the best conceptual shit going on. Its fucking gigantic at 1,040 feet but that's not the only thing that makes it cool. The top floor has a 360 degree interactive observation deck whereby a person could get info about each building visible from the deck through a display on the windows themselves.

Out of the many whacky, outlandish, and totally impractical submissions to this contest, this one stands out to me as best of those. Others included little flying robots that would retrieve resources for you and the conversion of South 6th Street into a series of public baths in front of the place. Seriously.
Another I would also give a semi-honorable mention to is this one that was one of the real winners of the contest. Though the architect is all the way from Hungary, he acknowledges the site much better than many of the others.

I thought I had a hard time picking a winner until I had to pick a loser. I don't know what some of these firms are smoking but I'm mad that they've never offered me some. Don't get me wrong-- they didn't all suck. Some were pretty good but nothing to write home about, others were boring more than bad. However, I've narrowed it down to a few that require some good old-fashioned GroJLart shit-talking.

What the fuck is this shit? Nice quality renderings but the design... I don't know where to begin! That goofy-looking green and blue tower? The base that looks like it was designed by a broken android? Though just one of the many submissions with a residential tower attached, I'm pretty sure this is the only one that also has a 60-car parking garage!

Is this Athenaeum supposed to be in Hell? Its in the middle of a desert with shadow people walking around it. The submission for this one is more about the system the originators created to access info at the library than the building itself. Why so all the windows face the St. James Street side? That just ends up facing the back of the Penn Mutual Towers!

What the hell are they trying to do with this one? It looks like a gun pointed at Washington Square. The interior of the cylindrical section is configured like a submarine and the whole place has all this indoor-outdoor shit going on like the Athenaeum is located in a place where it never rains or gets cold. Blech.

Ok, so many of us know what its like to be a college student. All those lofty ideas in your head but no experience in knowing the best way to execute said ideas. When I first started looking at the student submissions, I was excited for a couple of reasons. One was that I would see what the real future of architecture would look like, the other was that I would see ideas that the pros would never come up with.
What a disappointment. Some of the student ones look like they were given as a class project and were executed at the last minute after two weeks straight of binge drinking (I went to Art School, I know what it's like). Others seemed like tumblr opened an architecture firm. Therefore, I'm only picking a winner in the student submissions and no losers, because talking shit about some of these student ones would be too mean, even for me. They're not all bad though-- I narrowed it down to about six I kind of liked and chose a Winner and Honorable Mention.

Out of the 42 student submissions, this was my favorite: 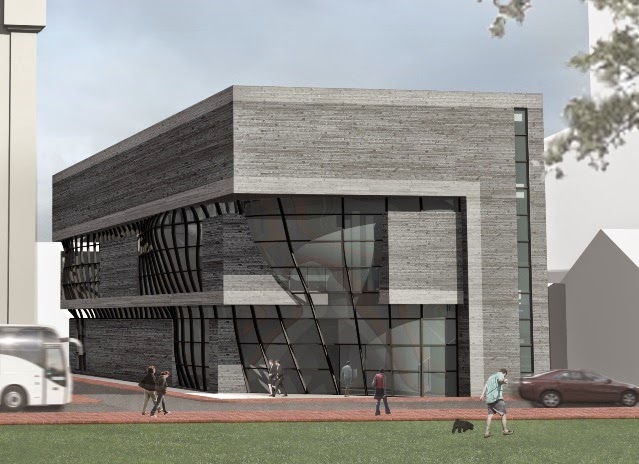 I didn't like this one at first glance but it the more I looked at it, the more it grew on me. Usually I don't like building with a big mass on top like that but this one makes up for it with the crazy curved ribs in the windows. The roof has a practically-designed public space with a small amount of greenery, as opposed to other submissions that had 100-year-old trees popping out from the basement. The glass with its curved ribbing pops out of the top as well. Good job, young'n. 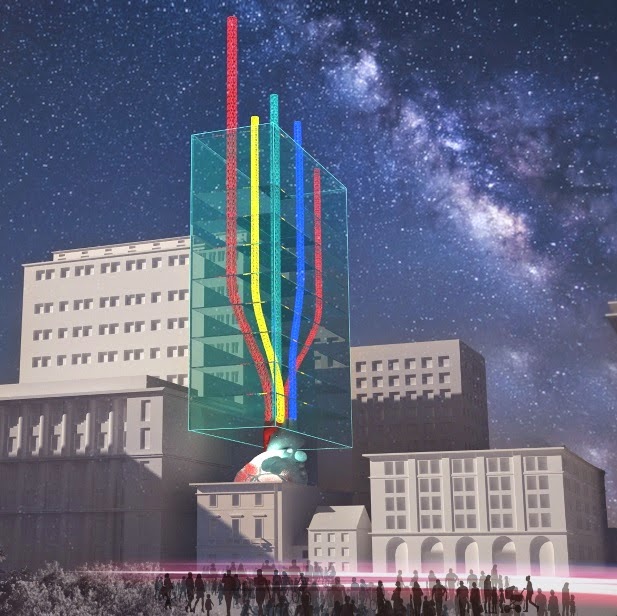 Ok, this seems borderline silly but I think it looks pretty cool, at least in the way presented here. Several of both the professional and student submissions made the John Notman building into a base for a taller building, but this one outdoes them all. Its a giant heart plopped down into the old building with veins/arteries popping out that are not only a design element visible from the outside, but also functional as elevator shafts/utilities/soffits etc. Pretty Neat.

Overall, this was a great idea for a contest and a great way to celebrate one of Philadelphia's most important institutions. Make sure to check out the exhibit at the Athenaeum, where you can not only see all the winners, but models of their designs and a slideshow of ALL the submissions.
Posted by GroJLart at 7:54 AM