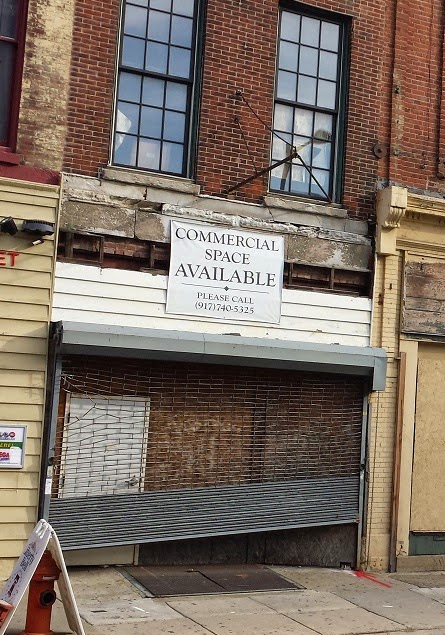 In 2006, EFL Partners started a renovation of the place in connection with bunch of other adjacent buildings they also own. I'm bad at reading legalese but from what I can tell, they got the place partially redone at best. Ever since, the storefront has been boarded up and has been looking like shit. However, in 2012, a sign suddenly appeared reading "COMMERCIAL SPACE AVAILABLE". Though I can't tell if the sign means the storefront or the upper floors, I'm going to assume that the store space must be available. The phone number on the sign traces back to some dude's house in Staten Island, but whatever. Call him up.
This is a ~945 square foot space with a 13'6" frontage on the unit block of South 2nd Street. This is a prime location for a business owner, since this block is rife with tourists during the day and covered with drunk out-of-towners (and out-of-neighborhooders) at night. Despite the look of this building and some others nearby, the surrounding 3-4 block radius is home to thousands of people with lots and lots of disposable income. In addition to that, there is an EL Stop half a block away and a bus transit hub nearby that serves a whole shit-ton of lines.
Be a hero. Save a storefront that hasn't been in use for over a decade. Make lots of dough while contributing to society. Its all right there, ready for you. FILL THIS FRONT!
Posted by GroJLart at 9:25 AM