Fill This Front: The Ashe Building West Side 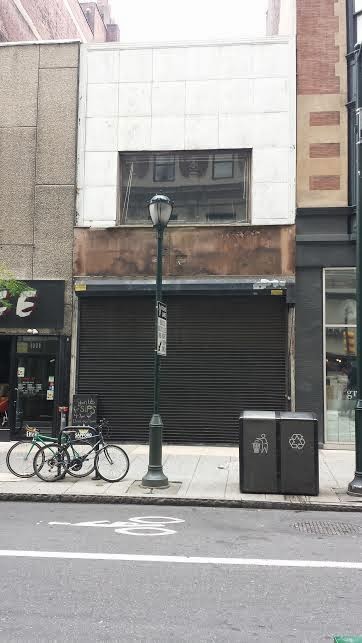 Chestnut East sure has come a long way since I started this shitbag blog, but it isn't fixed yet. Though there has been an ASSLOAD of improvement along this stretch (with much more to come), some little pieces still manage to stay shitty. The Cunningham Piano Building and attached one-story retail structure are still vacant, the old Bread and Butter space is still the featureless rear of a fucking nightclub, the Hale Building is still empty, 1208 Chestnut looks even shittier than before, the Bailey Building is still in limbo, 1200 Chestnut is still covered in bum piss, and this, 1230 Chestnut, has had that fucking gate down for 6 years.
1228 and 1230 Chestnut were once part of the same building, built in 1925. It was called the Ashe Building, named after the guy that paid for it, Benjamin Ashe. It was built as 4 stories and became store and offices of the Philadelphia location of a NYC-based shoe store chain called Wise. For reasons unknown, the whole building was reduced down to two stories in 1940 and the 1228 and 1230 storefronts were separated forever.
1230 went through a buttload of different stores over the next 6 decades, mostly clothing store chains from NYC. From 1980 to 86, it was Sounds of Market II. In the late 1980s it was the KSS Cab Company. In 2001, Famous Brands Outlet came along, giving the front the last lit-up sign it would ever have. The sign was still visible on the front as recently as 2 years ago, reversed around so as to not be as readable. As late as 2007, the front held one of those shitty electronic junk stores with no name.
On February 28, 2008, the owners of the Omnivision optical store/optometrist's office at 1103 Chestnut bought 1230 Chestnut for exactly $2 million. They had designs for a massive renovation of the place drawn up by Moto Design Shop. From the look of things, the place would become a gigantic version of Omnivision, with huge first and second floor spaces with some more stuff in the basement. Things seemed to have been delayed and the plans changed several times but by the start of 2012, everything about the project was approved by zoning, even a small third story addition on the back.

I guess that's still the plan for the place, but very little seems to have changed here... though the facade has been cleaned, the graffiti that was on the gate is gone, and the old signage has been removed. So what's the hold-up? Are the owners still trying to get funding together? Is there something about the building that's holding construction back? The place has racked up a whole mess of L + I violations and is getting more and more noticeable as a vacant storefront while the rest of the block has (slowly) improved.
I do seem to remember some rumors of a local restaurateur being interested in this space once, but I can find no confirmation of this. Moto Design Shop's website has an old restaurant rendering that resembles this space, but there are plenty of other storefronts in this city that have a similar configuration so its hard to tell.
Well if this place gets put back up for sale or goes up for lease, just think about this: this is two stories of 1800 square foot floors of storefront located in a high-foot traffic area near the Tony Goldmanized 13th Street in the Midtown Village/Gayborhood section of Washington Square West. Public Transit kicks ass over here, one block from both subways, 5 trolley lines, and the countless buses that run down Chestnut Street. The 23 bus, the most heavily used in the whole system, runs down 11th and 12th Streets nearby. Even more buses run on Market Street a block away, including a bunch of New Jersey Transit stuff. Therefore, if you put the right store in here, you will kill!!!
Think about all the shit that's going on at East Chestnut right now-- the retail is waaay better than it used to be-- long empty storefronts are now filled and two are expanding. Three buildings that used to have vacant upper floors are now apartments. Brickstone Realty's development is set to change the East side of Broad forever. Now's the time to get this building back to life. FILL THIS FRONT!