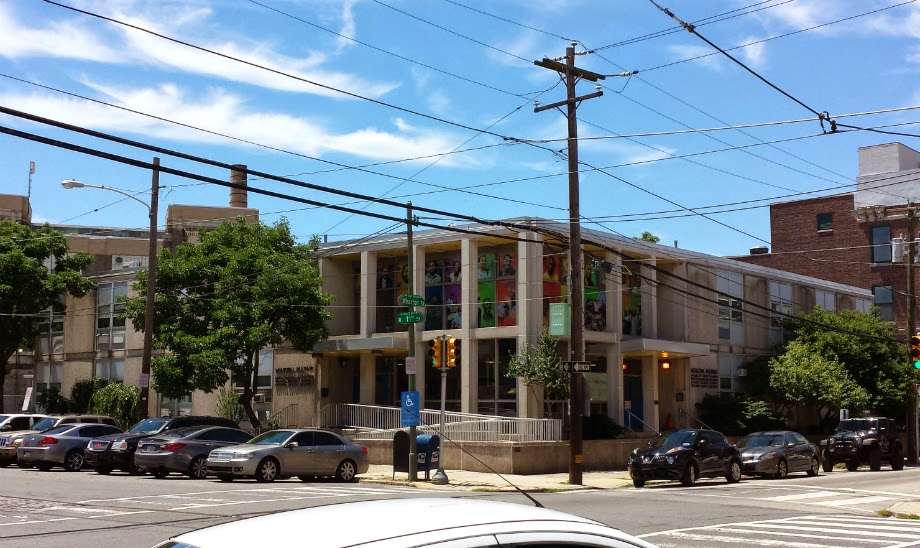 Ass. What a dump. Police stations used to look good. The surviving old-time po-po stations around town are pretty fucking good-looking. You have the Applebee's on 15th and Chancellor, the old 26th District station in Kensington, and what is now the Station House condos at 313 Race, just to name a few. So how the fuck did that all change? How did we start ending up with ugly shit like this?
In the mid-20th Century, when those old stations were no longer able to keep up with changing times, the city went about the business of replacing them with new and more modern facilities. When it came to South Philadelphia, the plan was to combine the 3rd and 4th police districts into one headquarters onto land that has been owned by the city since the construction of Moyamensing Prison across the street. At the time, the City Architect was George I. Lovatt, Jr, a suburban resident with a Philadelphia city government position.
Lovatt's suburan residency was controversial at the time, and with this building, we find out why. Lovatt commissioned the short-lived firm of Ehrlich & Levinson for this project, shitty architects who mostly did suburban public schools and a few city playgrounds. They were the ultimate in mid-century suburban designers who were in love with boxy stucco-covered buildings. Obviously, Lovatt thought that the kind of suburban mid-century Californey-looking shit Ehrlick & Levinson did was cutting-edge. What a joke.
The building was planned and designed in 1958 but, in classic Philly style, didn't start construction until 1960 and was completed by 1961, well after Lovatt got kicked out of the position.

At the time, the building was considered pretty badass because it isn't just a police station. It also holds L & I and Water Department offices. Big whoop-- the place looks like shit and it seems like the city also knew this because as soon as it was completed, they went about demolishing all the old-timey police stations around South Philly, even the ones that weren't in use.

53 years later, the butt-fugly 3rd/4th station continues to stay in use (with a whole buttloads of additons/alterations over the years) but still manages to look like butt. In 2010, the building had a photo mural installed on it created by the Cops & Kids program at South Philadelphia High School with the hopes that maybe these colorful photos could get the building to look less like absolute donkey dick. Good effort, but its not enough.
Now that this and other police buildings like it are getting to be about the same age as the cool-looking ones they replaced, its time to destroy the fuck out of these things and replace them with some proper-looking police stations with designs that'll be able to hold up for more than a year.