Fill This Front: 9th and Locust 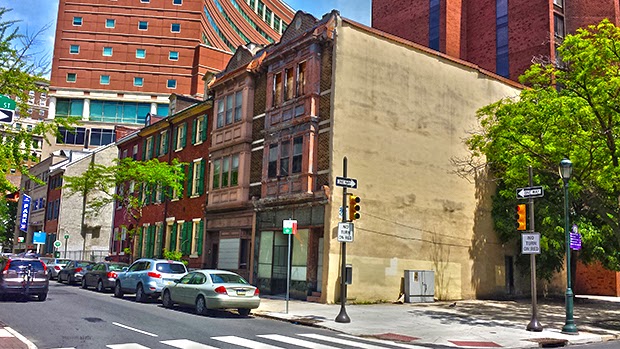 Man, oh man. Talk about a couple of buildings that have been pissing me off the thousands of times I've walked by them in the last decade. These two beautiful but dilapidated-ass buildings have been rocking empty storefronts for at least 20 years, but probably much longer. What's more, the singular owner of these two buildings is shrouded in mystery. These two storefronts could easily support any number of retail options. Until the wave of hospital-related construction came though here, one of them was in continuous use.
These two buildings were constructed in the early 1920s, most likely to replace the old houses that stood here that were probably destroyed for subway construction. The store at 229 South Ninth was pretty well-known in the mid-20th Century as the Shell Art Novelty Company, where WWII vet Edward Dunav created and sold jewelry and other crafts made from sea shells for over 20 years. He would buy them from Australia, Japan, Zanzibar, and Trinidad. Then he would craft them into tourist gifts and sell them to hotels and resorts in Atlantic City, Wildwood, Hawaii, Puerto Rico, and the Bahamas. He also sold super-rare types of shells for collectors at the 229 South 9th Street shop.

231 South 9th, the one at the corner, was a tailor shop until 1952 and then stayed empty until a Dr. William Eisenberg, an optometrist, bought the building with the intention of creating a practice on the first floor and apartments above. Unfortunately, some classic Philadelphia Bureaucratic Bullshit got in the way. In 1973, a new zoning code was adopted for the city and the building, which was previously zoned completely commercial, was re-zoned RC-4, which only allowed commercial on the first floor if the building was above 6 stories or had more than 25 residential units. Eisenberg had to appeal to the Zoning Board and ended up getting granted a variance in April of 1976.
Around the same time, a tidal wave of redevelopment was happening in this part of the city. Building after building was destroyed and the one historic home in the area was moved to southwest corner of 8th and Locust. Empty dirt lots reigned supreme.
Its hard to say what was going on with the buildings at this time but I can say that 231 and 229 were both purchased by the same owner, a mysterious non-profit called "Abbot, Inc" in 1992 and 1994, respectively. Ever since, they've been sitting there, looking shittier and shittier. Whoever this owner is, they also own all the other old houses on the block, including one that they just purchased for $825K in December 2013. 231 South 9th has accrued a buttload of L & I (excuse me, L + I) violations over the years.

Is it possible that this mysterious Abbot Inc has been slowly attempting to acquire all the properties on this block in an attempt to build something new here? It would surely explain why they let these properties go to shit. The same group also owns 217 and 219 South 9th, two thirds of the empty lot just to the north.
Well if that's the case, Abbot Inc or whatever you want to be called, GET IT THE FUCK DONE or clean up those two storefronts and put them up for lease. Maybe that'll get you some of the dough you need to get the rest of those lots and build whatever it is you've been sitting on these properties waiting to build. It better be worth the wait, you bastards. Otherwise, FILL THESE FRONTS!!!