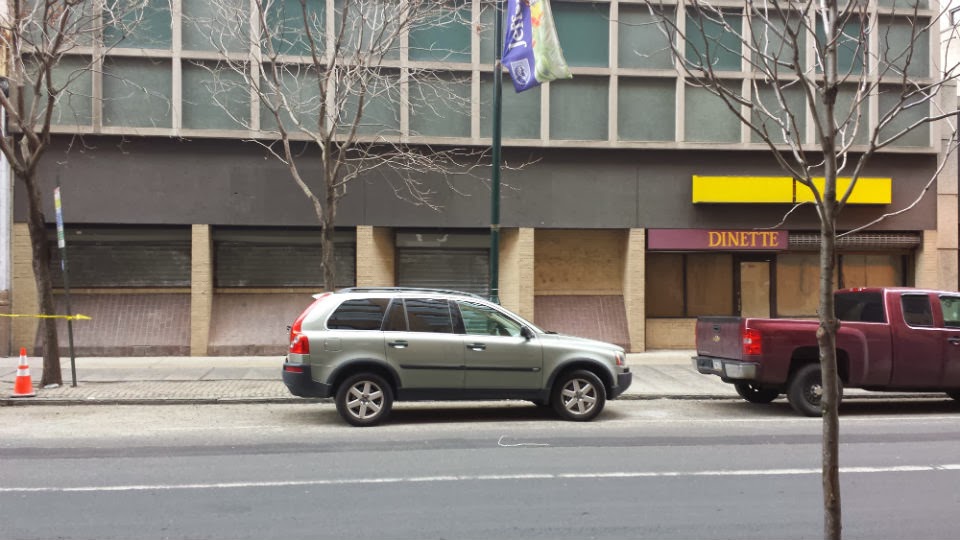 Hmm-- it looks like there used to be more to that Dinette sign. Oh well, this ugly motherfucker has been empty for a long fucking time. The Philadelphia Parking Authority has owned this parking garage since it was built... they are the ones that control this mega-empty storefront. Since they've finally gotten into restoring shitty parking garages, maybe they'll be putting this one back up for lease some time soon (Actually, at the end of this Inga article, they say that this parking garage is next up for a makeover) Hopefully the papering-up of the windows is an indication that this space will fill back up again in the near future.
Now, you should know that this retail space has some shit working against it that may stop a potential tenant. According to an L & I Violation issued this last February 20th, the party wall between it and the old Mercantile Library Building is fractured and deemed unsafe. The case is still open and being appealed by the owners of the Mercantile Library, so we'll see what happens with that.
Either way, PPA, get working on this shit so we can FILL THIS FRONT!!!
Posted by GroJLart at 8:45 AM