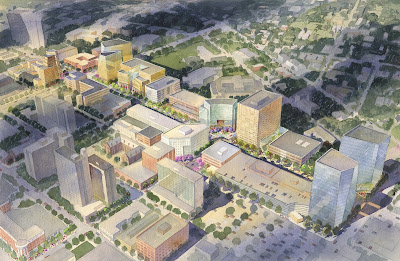 The University City Science Center loves to generate Dead-Ass Proposals like its their hobby, but this one is definitely their most large-scale attempt. Had this happened, the construction would be done by now and the 3400-3800 blocks of Market would make the average passerby shit their pants with astonishment. The University City Science Center began developing on this part of Market Street in 1965 (they were in the Widener Building before that) and has had about 5 gorillion different master plans and building proposals since. Even though lots of new construction and development is taking place there now, it pales in comparison to this master plan.
Read more at the Philadelphia City Paper's Naked City Blog!
Posted by GroJLart at 1:55 PM