The site of this building is now a crappy parking lot with a big mural on it. What a shame that this one got lost. The Franklin Building was a result of Mega Grandmaster of Ass Kick Frank Furness' childhood friendship with William West Frazier, sugar tycoon and generalized rich-ass motherfucker. Take a good long look at that thing and make sure to check out the super-high-res version of this picture here. Furness threw everything he had at this little building.
Each row of windows has something different about it except for the 5th and 6th floors. The facade even wraps around what was then called Lawson Street so even if you were pissing the the middle of that alley you could still enjoy some Furnessian magic. It even has statues of strongmen as the four columns over the front door, as if they're saying, "Show some fucking respect to this building or we'll drop it on you!". 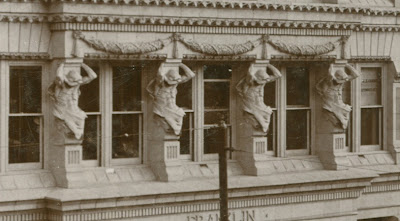 The origin of this building is quite simple. William West Frazier had known Furness since they were both toddlers. When Frazier grew up, he commissioned Furness to build him a shitload of houses and other buildings. You can read more about their relationship here. When Frazier needed an office building for the family's sugar business, at that time called Franklin Sugar Company, he went to straight to his buddy for a design. The Franklin Building was built in 1895.
The Frankin Sugar Company was constantly embroiled in lawsuits, many of which went to the United States Supreme Court. One about their inclusion in the "Sugar Trust" monopoly, one about not paying proper taxes and tariffs, another about their crooked transportation of goods. Even when this building was being built, they were going through multiple legal battles at once.
Records are spotty about when this thing was demolished. However, it's pretty safe to say that this thing was removed sometime in 1939 or 1940. How do I know? Well, here's a close-up of an aerial photo from 1939:

So there you have it. Instead of this cool-ass Furness building, we've gotten a shitty parking lot for the last 70 years. To this day, there's a big hole in this part of the 12th Street streetscape. If this building was still around today, it would make for a pretty badass apartment or condo building. Enjoy your fucking parking lot, everybody.